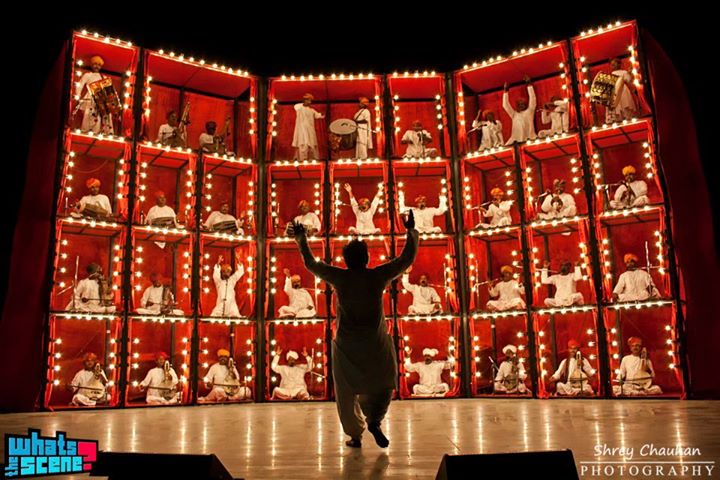 Spirituality is best represented by those who have been silently walking its introspective path, heeding only an inner voice – and not text messages. Your mobile phones are expected to be switched off, instructed the announcer to the moonlit, open night sky and the packed seated audience beneath. A diverse crowd comprising foreign cultural delegates, international visitors, upscale local restaurateurs and common folk showed up for the performance, a crowd who perhaps on a regular weekend wouldn’t even consider attending a folk/classical music program. Let alone a ticketed one.

But this was something else – Roysten Abels production of exotic and endangered traditions with The Manganiyar Seduction was about to commence.

A massive grid of booths – drawn with red velvet curtains, arched to form a concave, each cubicle large enough for a musician and peripherally adorned with backstage dressing mirror lights – stood dark and quiet in front of us. Thirty six musicians are sitting in their places awaiting their scene. I say scene because I realised later that this was as theatrical as it was a musical production. Age-old rituals of sitting around one another in the desert, signalling for time and rhythm had made way for a more structured, orchestral version of performing. But as theyve done in the past, the artistes will adapt.

The Manganiyars are a caste of Muslim musicians – who also worship Hindu Deities – attached to Rajasthani royalty. Their patrons over time were the Rajputs, then the Sultans and Mughals and in recent history, out of sheer neglect, anyone who could provide them alms (hence Manganiyar). For millennia these nomadic oral historians have served their patrons lineage with undying loyalty, bearing witness to daily celebrations and grand occasions, singing songs passed down generation to generation, their raw untrained voices scaling complex alaaps sung with unnatural ease . They have a pluralistic belief system, I read in the program handout pamphlet, How could someone find peace with contradictory internal universes?

The concert begins with one dimly lit set of cubicle lights and a curtain parts to reveal a solitary Khamaicha drone, then an adjacent cubicle with Mame Khan, passionately addresses my identity crisis – Na Main Hindu Te Na Main Moman. I notice a silhoutte has appeared on the platform; Daevo Khan is the conductor for this symphony, his baton – the Khartals. The cubicle lights seem to obey his commands; more booths are illuminated at the wave of a hand, allowing the vocal section to reveal the chorus motif of Alfat In Bin Un Bin An Bin Nukhta Yaar Padhaaya. Another booth is illuminated to bring in a Dholak rhythm. Minutes later, sections are sequentially activated; a lower level row of elderly vocalists, beside them more Khamaichas; higher up, a row of the younger artistes and an army of dholaks open up simultaneously. We settle into familiar-sounding Rajasthani territory with the inclusion of Sarangis, and the snake charmers cousin instrument, the Algoza.

Mention must be made of Daevo Khans abilities to play two flat pieces of wood extremely well just as everyone else proved their skill, given adequate space for improvisations and counterpoints. The duel with the dholak and Morsing was enjoyable and here Daevo does what he does best. He teases and challenges the audience who are no match to keep up, as he works the rest of the artistes who depend on him as a focus point from their locations – coordinating the various rhythm, bowed-stringed and vocal sections, sometimes lying low in the narrative and sometimes summoning up a storm in the story arc. The lights seem to struggle to catch up with Daevos orders – booths must be darkened or illuminated within a space of a beat as he orders a hypnotic drone with the sarangi and Algozas, kept in sync with his Karthal companions in the upper levels comically punctuated by the unusual Bhapang . We move into a Bhajan led by tamburas before leading back into the heady refrain with almost all of the grid lit up in ecstasy. I say almost; the last few closed curtains part to reveal the glorious finale – drum solos with massive Dhols, putting out enormous bass and reaching a frantic speed just ahead of a grand, spiralling choral climax.

Paradoxically, the stunning visual ending seems irrelevant as a parallel to the devotion that the Manganiyars sing with. The seduction is of the soul, not the body (Roystan). Music, of a time and people, speaks less of the musicians and reflects more of the collective mind of that culture. Where, today, do we mine for spirituality? How do we source this transcendence? The answers dont matter as much, the truth perhaps, is in the journey.