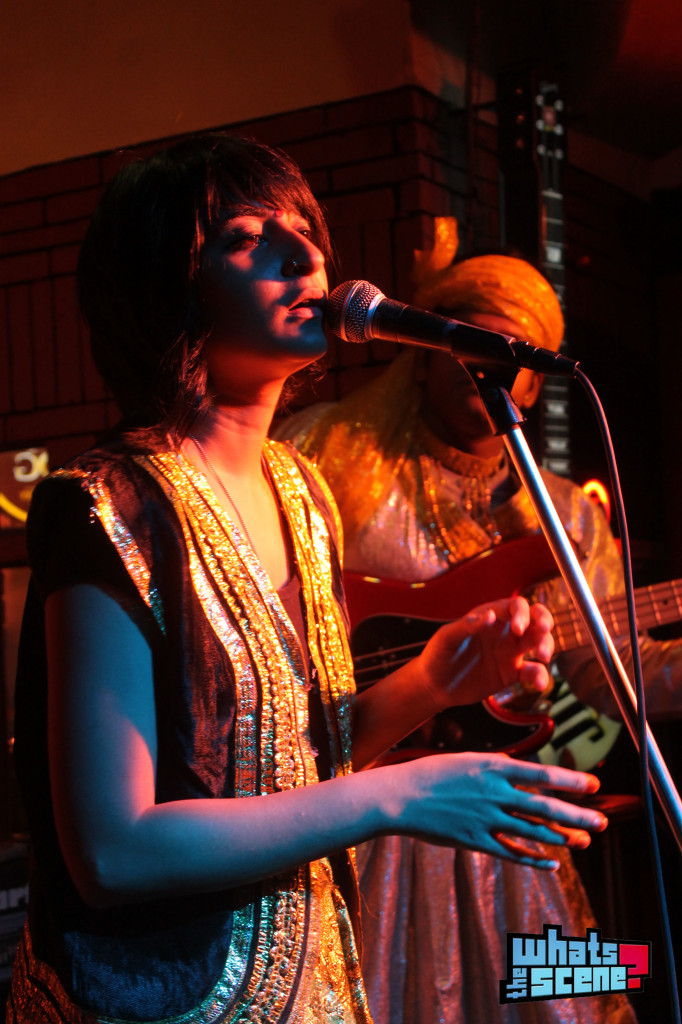 While heading to The BFlat Bar on the 18th of January to watch The Ganesh Talkies, I tried to think of another band that had named itself after a movie theatre. I could think of only two instances, band or otherwise, and neither augured well for my prejudices  Dream Theater and Nickelodeon. To boot, they were the winners of the Converse Original Band Hunt 2012 that, apart from the bump in exposure, doesnt mean much other than being able to print it in publicity materials and announce it upon entry like a ring announcer (introducing the hea-VY WEI-ght chammmm-pions of the WOOOOORRRRLLLLD, the GA-NESH TAAAAW-KEEEEEES!) with fireworks and a theme song.

To my disappointment/their eternal credit, they didnt.

Theatricality and Bollywood had been bandied about in the little literature Id read about the band, but the former has just been abused and/or I have a higher standard of what theatricality promises  no devils descended from the rafters, no pigs were shot into the atmosphere, and none of the band members had fake blood stains or existential awakenings (thought the bassist urgently ran into the green room a couple of times) at the end of the show.

What they did do, however, is wear costumes. An image search of past gigs showed that theyd worn a variety of themes, but on this night they were looking like courtiers and a queen in a high school play. Augmented with plastic sunglasses, it was a cute look, but it also made me wary. I like when bands take a bit of effort with presentation, and kitsch and irony isnt immediately a bad thing, but theres also the inherent danger that the concert becomes primarily about the show, overwhelming the music.

Thankfully, that wasnt the case. A few songs in, it was clear that costumes may be a part of their shtick, but not as a distraction. The stamp-sized B-Flat stage barely accommodated the five-piece band, much less allow for much, uh, shall we say expressive movement. But that didnt bottle their exuberance, most of which was brought by their magnetic lead singer Suyasha Sengupta, who, amongst other things, pounced on a speaker at one point, pounced back down and then whizzed around the audience, all while singing.

Its a narrow line to keep when evolving an idiosyncratic sound thats influenced yet not derivative, and the encouraging thing about their music is that they succeed for the most part  they dont swamp it with flourishes that scream BOLLYWOOD!!, but there was always a keyboard line here or a hint of a groove there that was unmistakably endemic. Theres alternative and a bit of glam rock in there too  a guitar bit in Item Song sounded straight out of Bowies Moonage Daydreaming playbook, while Monsters In Your Head, the first song theyd written as a band, was evidence of having started with a harder edge that branched off into parts more interesting.

This was complemented by some interesting lyrical ideas. At first blush, pretty much every song seemed to be about/or alluded to dancing. Dig a little deeper, and theres obsession, sexual objectification, stalking, insanity, and, yes, dancing too  all staples of Bollywood, but with some self-aware subversions. Take concert opener Roadside Romeo for example, which switched between the fantasy and reality of drawing the attention of a street lecher. And set highlight The Fan too, with the protagonists deluded lament to be noticed.

Ill confess that at 8.30 PM I was convinced that the show was going to be a disaster. It seemed like a reasonable time to saunter into any concert in Bangalore, known to have notoriously fluid starts, but there were less than ten people there. Thankfully the turnout improved, but the floor arrangement of the venue was such that most of the audience was seated (though not under duress), which dulled the vibe.

The band wasnt taking that lying down though, constantly egging the crowd right up till only the most obdurate were still seated. They even stopped midway through their encore (another round for Item Song) on the grounds of unfairness and proceeded only after the crowd started singing along to the chorus.