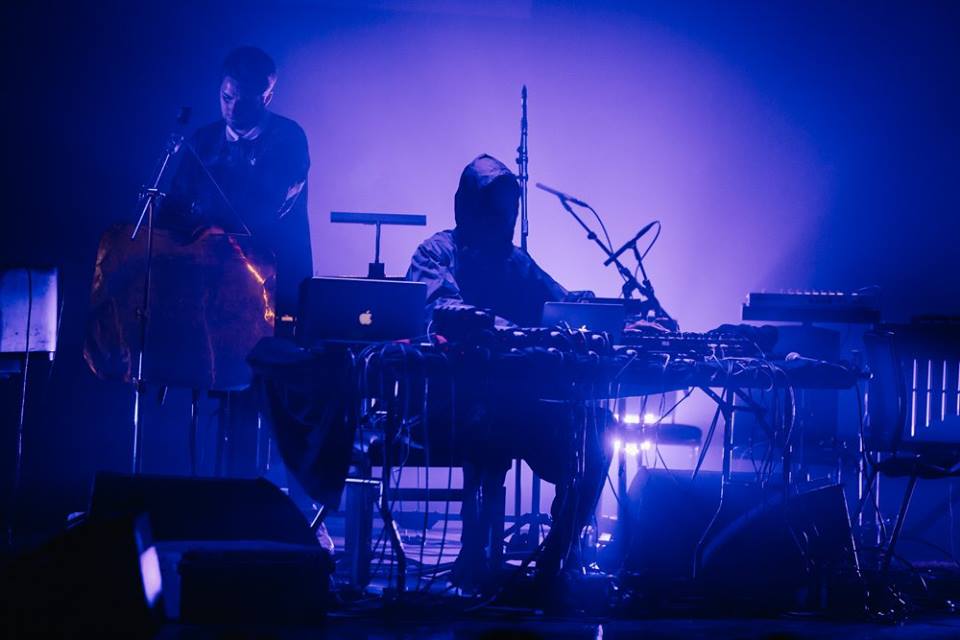 Darren Cunningham says he “sees the world in a different way”. Whilst it was nothing more than maternal hyperbole when his mother described him as “an alien of some sort”, it is immediately evident from any dialogue with the ‘sonic graffitist’ that he is no run-of-the-mill artist.  The conceptually-heavy producer, completely immersed in his art, weaves through industrial techno, R&B Concrète and dark electronica with a keen eye to subvert the restraints of 4/4 dance music. Hailing from Wolverhampton, he co-founded Werkdiscs, which began its life as a club night in the early 2000s. As it expanded it developed into a record label and is responsible for releases from the likes of Helena Hauff, Lone and Zomby. Actress remains the manager of the label whilst also pursuing his own left-field productions, having released 5 albums and a multitude of singles and EPs.

Seeing his own avant-garde output as synthesised orchestral pieces and also having stated in the past that he wanted to create “classic stuff for a new generation”, when approached by Boiler Room, the 10th of February was inevitable. The London Contemporary Orchestra, whose past collaborations include David Bryne and Jimmy Page, was also an obvious choice for this endeavour. Having won the Royal Philharmonic Society’s ensemble category in 2015, it remains one of the most diverse and innovative ensembles of our generation. This one-off project marks an exploration into the space between electronic and acoustic sounds through improvised interplay between the two parties. Actress shadows the musicians’ ‘investigation’ of their instruments by utilising live electronic manipulation, drawing out the variant tones and colours of this hybrid instrument.

A 60cm wide, aluminium-covered, spherical satellite that monitors the movements of tectonic plates is an unlikely muse for most, yet LAEGOS framed Momentum. Fascinated by the interaction between humans and technology, Actress used data from this satellite to shape the performance; applying it to pitch and amplitude to create jagged textures. The Brutalist structure of the Barbican also played a part in this project. Actress is infatuated with ‘environment and landscape’ and tries to incorporate his surroundings into the performance. The brittle, hard edged architecture leaks into the production in ways that are not immediately discernible –  the sine waves were shaped to match the silhouette of the building. He showed Dazed Magazine the manuscripts which didn’t adopt the form of a conventional score but rather short motifs spread out on a blank page, so as to match the blocky Barbican Center.

As Monk concluded his performance, replete with disconcerting flashing lights and sinister vocals, Micachu commandeered the space with a low-key set, providing a welcome break from the intensity. As the seats were filled, LCO took the stage shortly followed by a hooded Actress armed with a 4-channel mixer, a laptop and two drum machines. After a minute of tense silence momentum began with Darren’s new material. Hazy synth pads glazed in static were followed by the ensemble’s response until the percussionist waded in with a chopped up vocal sample on an MPC. Whilst at first jarring, the unapologetic sample became an accepted part of what was happening. Actress seemed completely absorbed by the performance in a trance-like state as he teased out samples and pored over the mixer. All the while striking images of LAEGOS were shown on the three screens.

The oscillation between intense rhythmic sections and the sparse beatless interludes, esoteric by nature, lost some of the audience. The open space didn’t seem to capture some of their attention as it was met with crinkling wrappers of interlude food and awkward shuffling along seat rows.  Through a rendition of ‘Voodoo Posse Chronic Illusion‘ the real beauty of the performance becomes evident – the method. A plastic bag was used as a substitute for percussion whilst the cellist plucked the strings with his house keys. The prepared piano was affected using blue tac and by laying books on the strings contrasting sharp and muted sounds. These sounds fit in the fabric of what’s happening and at no point do they seem forced. Haunting brittle tones were evoked from the scraping of the piano strings with a humble oyster card as well as an electric ‘milk frother’ grating against harp strings. These were then juxtaposed with interludes of softened percussion draped with cloth.

As an adapted version of the purposeful ‘N.E.W‘ comes to a close we were able to truly see the significance of the project’s title. Any aforementioned disinterest was absolutely dispelled as the audience became enraptured by the new weight and clear direction. As the performance began to build the three screens above the stage projected pixelated models of London Bridge and Brutalist architecture in grey and red. ‘Hubble’, perhaps an exception to Actress’ usual dark, greyscale palette, holds a considerably more uplifting and positive feel than the RIP version as it is coupled with bright flashing lights. Following this came a finale of dynamic and dissonant crashing sounds, not far from that of Monk’s performance, but less acute and far more gripping. As a four to the floor rhythm rolled on in the background the atonal shattering effect drew to a close and the harp adopted a melody expected of a traditional child’s music box. The kick drum remained a constant in the background; all the performers stood. After leaving the stage with applause and cheers the lights remained off whilst the kick drum persisted. Darren returned to the stage swinging a black jumper like a lasso drumming the audience into a frenzy. He retrieved his 2L bottle of Evian water and once again exited the stage. As the lights came on and the rolling rhythm began to fade you could hear hesitant cheers subside to confused discussions. Encores probably aren’t in Actress’ nature.