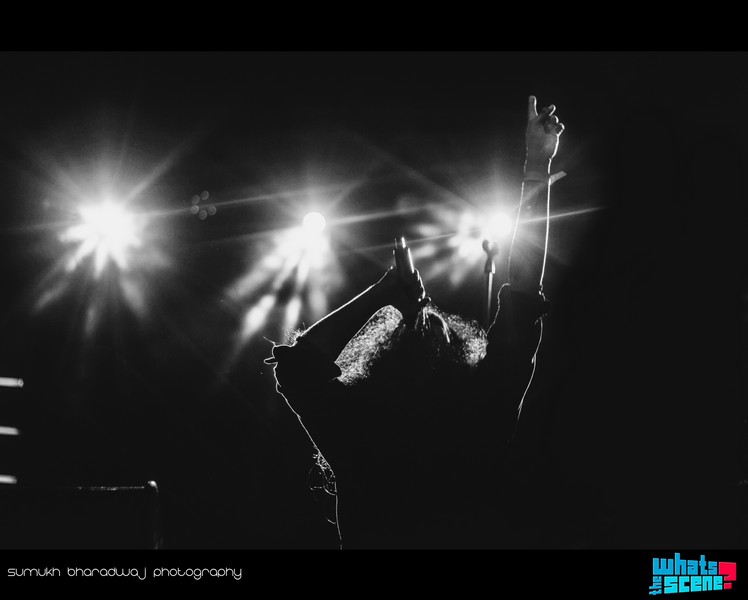 When two bands of national acclaim are gathered to play at a popular venue, you can expect the early animated crowd to fill in way before the concert. This night was no different. Each table had an excitable someone telling their friends about the bands that were to perform. One of the most heartening things about the Indian music scene is getting to see fans pointing to band members (who are almost always part of the audience, sipping on their pre-gig drinks) in awe. And so it was that when Aks took the stage, the audience cheered them with a fervour that came from finally not having to mutter their appreciation at dinner-table volume.

Without wasting any time on the soundcheck, Aks played their first song  a track about a traveler moving through life while trusting god with their good graces. The vocals were very slightly off-key at the start, but as the song picked up, the track blossomed into a powerful anthem. The bands characteristic blending of aalaps towards the end of rugged vocals was reminiscent of their Coke Studio days that were well-favoured by everyone. Audience engagement also started early as the band urged everyone to sing the chorus.

Their next track was called ‘O ji re‘. It had all the undertones of a sweet folk love song, complete with a peppy flute solo. Xaviers vocal acrobatics on this one did not fail to impress, although his breath control did seem to waver around the high notes. After a bluesy ‘Panchi‘ which was a song about freedom, packed in with a flute and a guitar solo, a deceptively long flute intro led the audience to believe a smooth song was up. What did play was a cover of the Agosh classic ‘Paisa‘. There was a very long drawn-out instrumental section in the middle that wasnt devoid of technical brilliance at all but seemed patchy in composition. ?

Their next song ‘Baavla‘ was dedicated to the heavy metal band Anvil. It was a smooth number with a catchy acoustic solo. However, much of the rhythm was held together by the flautist. They then played a new track that started with a drum intro and proceeded into becoming the perfect, upbeat final song that ended their set.

The crowd cheered on as they left the stage and their hearts wanting for more. After a short break, Agam took the stage. After a brief soundcheck, they got the ball rolling by playing their usual set opener  ‘Brahmas Dance‘. Other than a few glitches that were barely noticeable, their set was as good as it gets. They played ‘Dhanashree Thillana‘, ‘Seventh Ocean‘, ‘Ishq Labaa‘, ‘Swans of Saraswati‘, ‘Boat Song‘, a really great version of ‘Dil Se Re‘ followed by a genuinely innovative cover of ‘Aaromale‘, to then end with ‘Malhar Jam‘, which is also the last song on their album  The Inner Self Awakens.

There could not have been a more phenomenal ending to the evening with a long-drawn percussion solo in the middle of ‘Malhar Jam‘, followed by Dappankuthu. The audience really got what they came for, and there was not a single unsmiling face. Their youngest fan was a two year old who caught everyones eye as she sat on her fathers shoulders jumping to every beat.
If Aks set the tone for the evening, Agam turned things up a notch higher. A gig well executed, and an evening to remember.