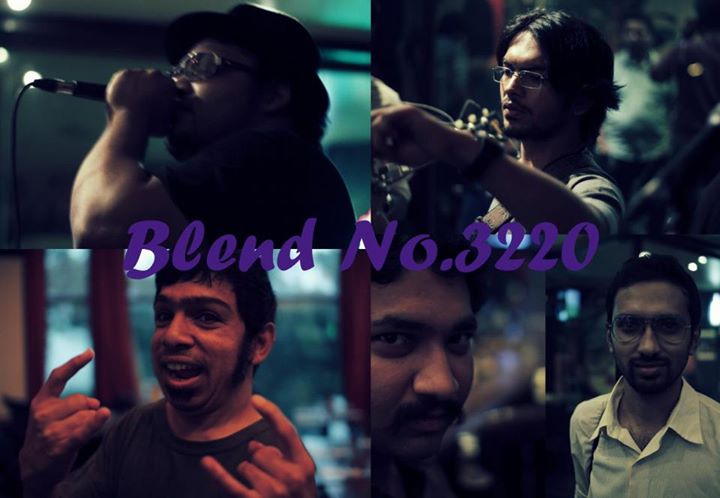 On the Holi/Women’s day weekend, I decided to catch up with a couple of old friends at Koregaon Park and watch Blend No.3220 live at Café 1730 Beans & Booze last Friday. It happened to be an important gig for this newish blues band, which was welcoming its new lead guitarist Pratyush Pillai and bidding farewell to its faithful bassist Sajib Biswas. Named after a blend of Old Monk rum, Blend no 3220 plays blues rock with provocative lyrics, repetitive chords and the idea of reaching out to people rather than chasing commercial success.

Quite appropriately, Blend’s first song ‘Mean Trouble Woman’ was about members of the band who have come and gone. Losing band members can be hard, especially if you’ve been jamming for some time and realize you’re good at it. Earlier this year, Sandro Sadhukhan left Blend No 3220 to fulfill other music dreams. The backbone of the band was his partnership with lead singer, Arnob Chouduri. Tonight’s tragedy was Sajib Biswas, their bassist, returning to his homeland – Bangladesh.

Attrition forced the band to look out for fresh talent and through Biswas’ contacts they were able to procure the Best Guitarist of MTV Rock On fame – Pratyush Pillai. This shy 25-year-old is not only technically precise but also immensely humble after his desi-fusion band, Khilaugh finished second at MTV’s rock music reality show. Nicknamed Shredman because of his metal/hard rock influence, Pratyush is evidently still learning to complement Blend’s passionate Bengali blues soul. As a recent addition, he has been practicing with the band for just a week and you can tell that the blend is not as perfect as it should be. When Arnob went “Pradyush, baby you know how you make those dirty sounds on the guitar,” he seemed to think it was probably part of the lyrics and there was no response from Shredman.

The well-dressed drummer, Sumair Zubairy, sported a black studded jacket and proudly held his Mohawk high, as local blues legend David Mancy took over for a guest performance. Somehow his demeanour and showmanship made him slightly unapproachable and I only attempted a handshake at the end of the show, as I was told he’s the reason the band doesn’t require an agent or a recording label.

Continuing with their soft rock intro, the band played ‘Somebody Else‘, a warning to any lover in a mediocre relationship. Next up was ‘Highway’. Introduced as “deep and pervasive”, this one was about getting high – “one of the greatest feelings in the world”. Some audience members smiled and whistled in recognition while others left in search of the metaphoric highway.

Then came the soulful ‘I’m coming to get you’ which was based on Arnob’s experiences while working at a forensics lab. “I felt like a rat hiding in your house,” he commented when asked about the back story. Forth on the list was the explicit ‘Down Rite Dirty‘, talking about things that are otherwise taboo. ‘Crying Still’ was about a 45-year-old insomniac who was so frustrated with life that he took his shotgun and killed his entire family. Lucky number six was ‘Beeswax’ a standard folk song from Mississippi – a typically fun-to-perform 1800s song. The thing about blues is that it’s familiar. Even if you’ve never heard these particular songs before, you can relate to them. Especially if you’ve listened to enough old rock music, everything begins sounding like home.

The European themed Cafe 1730, I’m told, is more of an after party place. It’s just above Kivas and earns its patronage from the fact that it’s open till 4 a.m. It has nude paintings on the ceiling above the 40-inch screen and Bose speakers worth 2 lakhs. They didn’t have a sound engineer that evening, just someone to help set up the equipment and then the band members were left to “do their thing”. No one in the audience would have guessed that the piano was never meant to be incorporated into the gig. The way Arnob used the instrument after the intermission, felt as if he was familiar with it and had planned it that way. But I talked to him later and found that it was done on the fly.

Throughout the random jam-based set list, Arnob handled the harmonica with ease earning him the nickname “Blowman”. “Other people tune their instruments, I blow”, he joked. It’s this type of explicit references that got the crowd going and encouraged the band to perform old favourites. Arnob is a passionate writer but prefers to have sloppy jam sessions on stage rather than covering other musicians. This time, though, they did three covers and a few blues standards just to keep things going. Chuck Berry’s ‘Johnny B. Goode’ and Muddy Waters’ ‘Hoochie Coochie Man’ gave the night a much needed upbeat familiarity, which was missing from Blend’s own compositions.

The audience consisted of friends and fans from the music community. Much to my amusement, someone with a Lamb of God t-shirt sat in a corner nodding away to the blues. At our table, a friend nursed his Vodka as a garrulous flirt charmed a pretty girl. I guess one could blame the sad turn out on the fact that most Pune people were at  Blackstratblues / Warren Mendonsa’s gig at High Spirits and given a chance this band would have been there as well. Arnob dreams that one day it’ll be possible to gather a few music enthusiasts and roam the city from one gig to another with just a guitar for company. This gig, however, ended with a tribute to Sandro Sadhukhan, their ex-vocalist and guitarist. Pink Floyd’s ‘Shine On you Crazy Diamond’ , with a little bit of ‘Wish you were here’ thrown in for effect, was a perfect fit for the end of the evening.

It’s not surprising that most of the audience stayed back to chill with the band over crappy cocktails (stay away for the ginger wine and never waste your money on ‘Chocolate Dream’) and wholesome dinner (Bolognese Spaghetti was a hit!) I got to talk to the band in the everlong intermission (why bother about time when things aren’t shutting down at 10.30?) and they shared their experience with the music scene. Newcomer Pratyush seemed to feel that Indian musicians can’t afford to make their passion a full-time occupation. He is the proud owner of a Gibson Les Paul Studio Edition (Ebony) thanks to MTV Rock On. “Even though we didn’t win, the show helped me pursue music as a hobby”, he says “Indian bands don’t get to perform like this unless they’re well connected.”

Personally, I hope Pratyush can dedicate more time to Blend no 3220. Especially because I’ve seen Biswas, Arnob and Sandro jam together and I know how tight their music is. In impromptu music that depends, almost solely, on the partnership between the vocalist and guitarist, you can’t afford to have anyone who is too passionate about his or her musical instrument. Here’s hoping that Pratyush will break out of his metal/rock mould that was created around his MTV Rock On fame and blend into the current blues rock scene.

Blend’s frontrunner, Arnob had a different opinion about the band’s future. “It’s not that difficult to market a band. We get mall and restaurant gigs quite easily but they expect us to be human jukeboxes and play commercial hits.” said Arnob. “We might record a live album”, he adds “But we’re against commercializing our music because that spoils a musician’s way of thinking.”

This was Sajib Biswas’ final performance as Blend No 3220’s bass player. “His forte was ‘thinking music’. He loved to experiment and learn from everyone around him,” said Arnob, who was sad to see another familiar face disappear. But they’ve wasted no time in finding a replacement. Another MTV Rock On participant, Keshav Iyengar, will be joining Blend’s line up. Along with all their fans, I’m looking forward to see how this new chapter of Blend No 3220 turns out. From the looks of it Blues abhi baaki hai!

Parnika believes every song is a living person in an alternate universe she'd like to visit someday. You'll hardly ever see her without her headphones. Her other interests include travel, photography and poetry.

Tales from the Mahindra Blues Festival