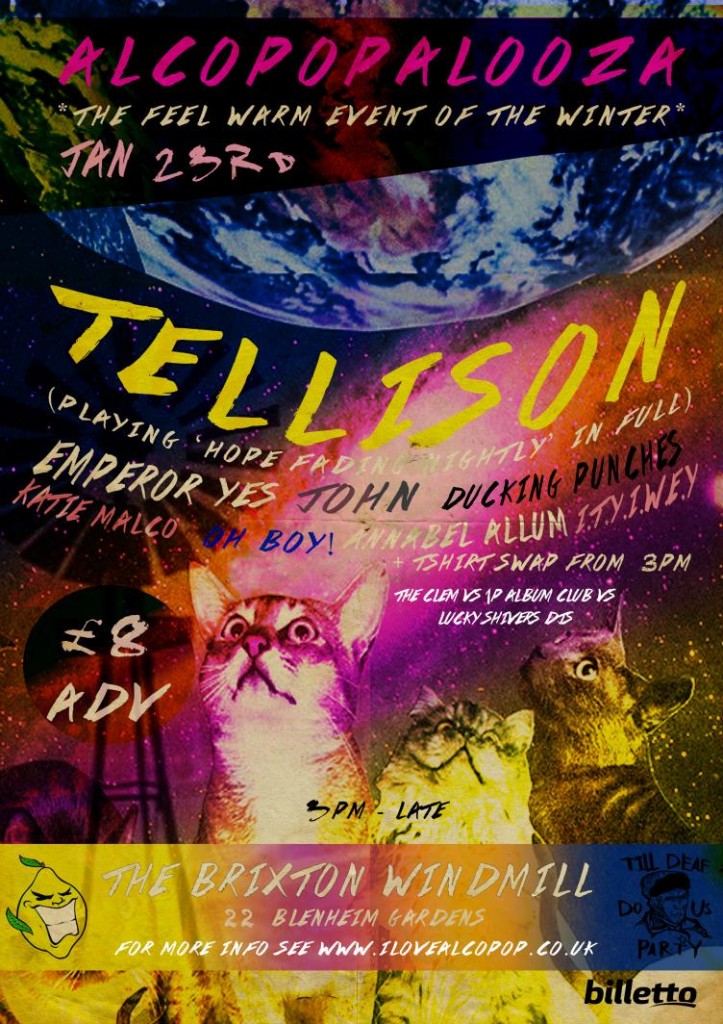 The Windmill doesnt look like a music venue really. It looks like a 1960s prefab thatd fall over if you poke it quite hard. Theres also a massive Alsatian on the roof thats barking at me, not something I typically associate with music venues. Im sat across an increasingly damp table from Stephen Davidson, lead singer and one of the 2 songwriters in indie-rock band Tellison. In fairness Davidson doesnt really look like a rockstar, but as with The Windmill looks can be deceiving. Were here for the feel warm event of the winter; Alcopopalooza. Curated by the Oxford-based Alcopop! Records, the event serves not just as showcase of their formidable roster but also as a celebration of everything thats Fuckin Indie. Weve seen sterling sets from Northampton grunge-pop quintet OhBoy!, Londons Katie Malco, Norwich folk-punkers Ducking Punches and through the walls we can hear the dulcet tones of noise-rock duo John. Electro-weirdness from Emperor Yes next, then our headliners, Tellison, playing their 3rd album Hope Fading Nightly in full.

The Alcopop! connection runs deep with Tellison. Theyve known Jack Clothier (label boss) since before Alcopop! was a thing, and the label even tried to put out Tellisons sophomore, The Wages of Fear. The decision to go with Jack to put out the bands third album was obvious, Davidson explains. The problem, he confesses, is that that no one really wanted to put out the album; no one was interested. Were all pushing 30 now, he says, smiling. Were at the point where I say Im in a band, and if people havent heard of you they kind of give you a look, he continues, and hes right. Most of Tellisons peers have fallen by the wayside over the years, and the prospect of putting out their third release is apparently not a particularly glamourous prospect. Chalk this longevity up to the long gaps they leave between albums or just good luck, its striking how Tellison are one of the last of the class of 05 still standing. But Alcopop! didnt simply offer the band a shot at recording an album when literally no one gave one, they also showed something that is often lacking in the modern music scene; excitement. Put it down to the ubiquity of music or just disinterest in the scene, but there is an apathy in music today.

Tellison know this. The bands existed for some 10-odd years now and in that time theyve played everywhere in the country there is to play; theyre veterans and are well placed to comment on changes in the music scene over their lifespan. And what changes there have been. Contact! Contact!, the bands debut, sold out in days. The physical release was the only way to get a copy of the record, and the story evokes the enthusiasm and romanticism of the album. The ubiquity and availability of music has watered down the appeal of music, especially live music, Davidson reasons. He may have a point too; the advent of Spotify and YouTube as media has eroded the exuberance of the Contact! Contact! release.  Over the years Tellison have released a further 2 albums, seen bands and venues come and go and have themselves changed and matured. From the almost indie-punk sound of their early work theyve progressed to a glossier sounding sophomore to arrive where they are today with Hope Fading Nightly.

From the start the album, from the first plucked notes of the first song (‘Letter To The Team After an Imperfect Season’), you can hear how much this album means to the band. And, indeed, to everyone listening this evening. Dear Henry, Peter, Andrew roar the crowd as the song starts, which seems to visibly surprise Davidson and co. Word for word the song is sung by the masses that line the bar and extend round the corner of the awkwardly shaped Windmill. As the band kick into the second track, the far punkier Helix and Ferman, the energy continues to pick up. The sombre song is at complete odds with the room, and with Davidson smiling from ear-to-ear its hard not to get swept up in the moment. Drink red wine, say that youre fine! I found myself singing along to the wonderfully catchy middle-8, before the tempo dropped for some of the more low-key tracks on the album. The wonderfully simple (yet infuriatingly catchy) hooky tune ‘Boy’ follows, allowing Tellisons second songwriter, Peter Phillips, to show us his not inconsiderable songwriting chops. ‘Wrecker’, an ode to self-destruction follows, with ‘Rookie of the Year’ soon after. Probably one of the slowest songs on the album, ROTY, Davidson confesses, crystallises all the themes explored on Hope Fading Nightly into a single pop song. Your initial success was a rogue result, howls Davidson and the crowd in unison, yet based on tonights showing it would appear that this is anything but the case. The side finishes with an anthem for the disenfranchised; ‘Tact is Dead’. With the faster tempo and driving drum beat the energy picks up as the crowd surges forward, and the show starts to feel a lot more like a punk show. Fingers point for the chorus as, once more, crowd and band unite.

In my head we then flipped the record to side B, and continued on. The next song, and one of the first to be written, is ‘Orion’. Set, allegedly, in a sexual health clinic, the power-chord driven intro is reminiscent of The Weakerthans or possibly The Wonder Years. Kicking into a chorus laden with Yeah Yeah Yeahs! dumb pop-punk this isnt, as once more Tellison exhibit their uncanny ability to hit the thinking mind and the dancing feet as ever. ‘Mendokusai’ next, and once again the tempo drops but the energy is by now unyielding. I could quote from these songs forever, but for fear of making this article a bit boring I wont. The boys on stage career headlong into the grungy riff of ‘Hellhole’, allowing Phillips to take the reins once more before my personal favourite off the album, ‘My Marengo’, chugs into view. A song not bouncing with the energy of some of the other album highlights, ‘My Marengo’ explores the theme of suicide in the most Tellison-esque way possible; with references to Napoleons horse. The understated production is completely at odds with the extremely defiant, anti-suicide chorus; I will mourn you but I wont agree, with why you did it and it wont beat me. The set mightve ended with final song of the album, the softly-spoken ‘Tsundoku’, a lament questioning (not for the first time) the efficacy of meritocracy and hard work. But it didnt.

The sort-of-encore kicks off with a stripped-back version of crowd favourite ‘Collarbone’, climaxing at the end of the song as the crowd steps it up a gear (as if another gear was possible) as the pit opens up. The final song of the set is ‘Get On’, the first song from The Wages of Fear. I might have some writers block but Im still useful to you, sings Davidson, the smile having not left his face for a good 40 minutes now. ‘Get On’, almost indie-punk in nature, shouldve sat slightly at odds with the slightly dour content of the set. Yet it doesnt. Tonights show, from start to finish, has felt like an absolute triumph for Tellison. They may never have achieved everything that music couldve (and arguably shouldve) given them, but its nights like this in sweaty rooms that kinda make me glad that they didnt. Tellison are the ultimate underdogs, fighting the good fight every night yet somehow not quite winning. But that hardly matters, does it? Tellison almost set themselves up for failure Davidson admits, he can see it in the bands they emulate and their dogged commitment to the music they love. Ultimately it doesnt matter on nights like these whats going on in the real world, we can all accept that even if this music will never be popular then we can still go down fighting. And after all, there really is a subtle kind of honour in failure.