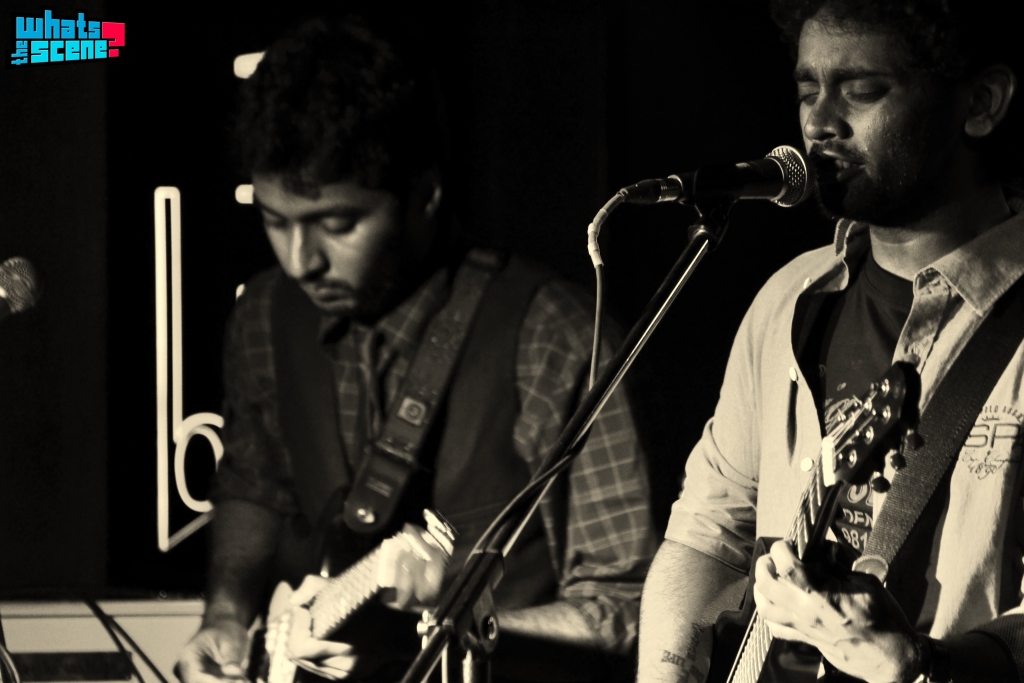 Thursday evening saw me riding over the Koramangala-Indiranagar Ring road, braving the biting Bangalore cold to lay to rest a busy week and reach out to some good ol rock and roll. After reading a recent write up that christened our friendly band next door Solder as performing Bangalore Rock, I was eager to see what they had to  offer that evening.

I reached at half past eight and walked up the stairs of the building to find Mad Orange Fireworks halfway into their song Black Hole – a song about a break up. I was partly glad at having caught an interesting song, and partly disappointed at having to listen to the sound in the first place, which was a tad jarring. I had listened to Mad Orange Fireworks at Strawberry Fields and was already familiar with the songs that they had on their setlist that evening.

Loveshack is located on the fifth floor and has a bar and a restaurant that opens out onto a terrace. The band faces a small audience of about 25-30 and has to squirm on the stage to face the entire crowd. So the very setup of the stage isnt very comfortable. I was also a little taken aback by the speakers, which werent flanking the band but were placed elsewhere.

MOF soon moved into their next set of songs, Kiss goodbye, and I want you.  Unfortunately the vocalists voice was drowned in the bad sound system and the only lyrics I could decipher from the latter were I want you so bad – evidently a love song filled with longing.

Once I find you stood out among the rest for certain. An extremely groovy song, the drums and leads seemed to take their genre someplace else. Empty Saturday followed next.

Im seven down the barrel,

 the lyrics sketched a ballad of a lonely guy on a Saturday night. Beginning with a bass intro, I doubt any band could capture the emotion as well as Mad Orange Fireworks did. However, Michaels vocal cords seemed restrained that evening and, in my opinion, he couldve sung better.

MOF wound up their setlist with School Boy and Dont forget me. The latter found the band diving headfirst into their song, their instruments exploding into a heavy outro.

I often wondered what feel good rock meant and the answer lay in Solder. They broke into their first song, Questions, thrusting their brand of rock n roll over the audience. Unfortunately, I couldnt hear a word of what Siddharth sang, because of the tainted sound system.

Pushing through to their next song, Save the World, Siddharth began marching on stage with great gusto. If theres one band that exudes spirit from every pore, it is Solder. The rhythms, drums, bass and leads were played with such cheerful unison that they blur the lines between a routine jam and a live performance.

Stay with Me followed next – a nostalgic, wistful number after which the band moved onto Cookie monster- a more fast paced and power-packed song.

Up until this point, the evening seemed rosy. Just as Solder started playing Waiting for love the word came around that Loveshack didnt have the license to perform so late into the night. The bouncers made an unwelcome entry, asking the band to tone down their music or wind up for the night.

After a brief pause, Siddharth caught hold of his acoustic guitar and said that the next part of the show would be unplugged; resorting to the oft-quoted line The show must go on!

Next up, was Passerby. This song is almost a classic, heralding high pitched leads and rhythms at the intro.

Dischordian at The Bflat Bar, Bangalore

Thermal And A Quarter at The BFlat Bar, Bangalore