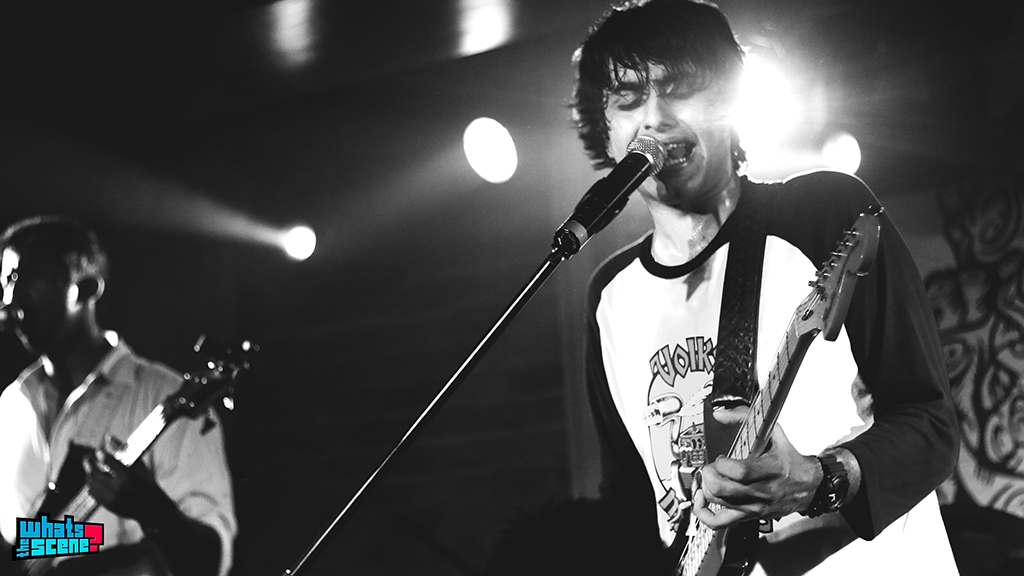 Whenever there is news about a Skrat gig, there’s always a ripple of excitement among music-lovers in India. When a Facebook event notification popped up about a gig featuring these badasses at The Moon and Six Pence (MASP) Chennai, there was a huge buzz in the city!

Skrat always has something new to offer during every show and what went down that night was particularly exhilarating because they hadnt performed in their home city in a long time and the locals missed the band  it was clear that the feelings were mutual.

The Moon and Six Pence is known for its barn-like, Irish stage space, where the trio fit in like pieces of a puzzle. The minute the amps were plugged in, people began to swarm in and fill the venue. The effect was instantaneous – the lighting, the adrenaline rush from the 3-minute opening instrumental topped with the humidity made it seem like the heat levels had shot through the roof.

Skrat started with a power-charged version of Revolution, which was without any doubt, an excellent opening to the set. Jhanu, Sriram and Tapass belted tune after tune, as the groovy yet raw songs from their third album, The Queen satiated a rock-hungry audience.

The band proceeded to play Favorite Song that sported a very groovy bass line, and a lighter, funkier guitar riff. The song as such is breezy, laid back and carries a tinge of romance with it. This song, being one of my personal favorites, put a huge smile on my face!

Skrat had announced the making of a fourth album during IIT Madras annual cultural fest, Saarang.  However, the gravity of the announcement did not seem to dawn on the crowd then. This evening, the realization set in – NEW SOUND. Skrat, known for conjuring fresh music with every album, exceeded expectations and blew us away with their new song, Wake Up from their upcoming album. Perfectly concocting the early and later influences of Rock n Roll, this song had the quintessential Skrat flavour to it.

The song that followed next was powerful  jaws dropped wide open! Any one who has listened to Gun Slinger on their music players would just dismiss it as another Skrat song. But that was exactly what this band did not want people to assume. A progressive and strained introduction to Gun Slinger had everyone transfixed, with their eyes glued to Sriram TT. His vocal range took me by surprise – his fierce, yet controlled vocals were a complete knock-out. This transitioned into ‘Gun Slinger II, which had the audience jumping to the chorus!

Stomp appeared to be the much awaited song – the introductory riff was just enough for the audience to take over the vocal duties and sing along with their hearts on their sleeves. The band had acquired over 50 vocalists with that song! It soared to a whole new level when Jhanu and Sriram jumped in the air together, belting a wild riff that made the audience bounce off the ground with them!

This familiar song was succeeded by another new song from their upcoming album, called Raptor. This song is longer than the usual Skrat songs, and retains that funky tune to it. Tapass Nareshs long overdue drum solo was timed to the T! Up next was another song one can never grow tired of – High caught the audience completely off guard with its orgasmic climax.  ‘Tin Can Man sounded as fresh as it did when I heard it for the first time, and it was high-spirited and full of energy that night.

The crowds energy was at an all time high, the musicians were at their best and they decorated the chorus with amusing variations. These little surprises caught the audience off-guard, and they seemed to love every moment of it. This was definitely one of those gigs that will be etched in everyones minds for a long time.