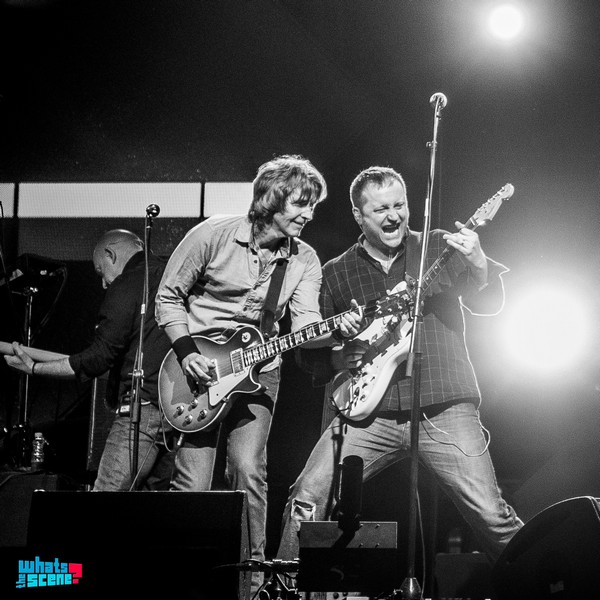 Nostalgia was, without a doubt, the theme of the evening on 19th March 2017 as Bengaluru prepared to witness the British rock band  The Dire Straits (minus Mark Knopfler).

Now dubbed The Dire Straits Experience, the band features two of the original members  Chris White on saxophone, percussion and vocals, and Chris Whitten on drums. The band also has Terence Reis attempting to fill the gargantuan boots of guitarist and vocalist Mark Knopfler.

A long-standing initiative by Seagrams 100 Pipers Music CDs, bringing to life their message Be remembered for good, the 2017 edition of Play For A Cause focused on providing sustainable drinking water to villagers in Rajasthan. A part of the ticket sales proceeds was earmarked for construction of water conservation structures in target areas to help a cluster of villages.

The drive to the venue, the Bengaluru International Exhibition Centre, which is a fair way out from the center of town, served up the first dose of nostalgia, as the new city skyline gradually gave way to one reminiscent of old Bangalore. With only the occasional structure more than a couple of storeys high, we had an uninterrupted view of the gorgeous watercolour sunset.

The venue itself brought back memories of the hallowed Palace Grounds, or even MMRDA of Mumbai, and all the concerts that we ever caught there, with the layout, the dusty concert area, and the pre-parties dotted all over the massive parking lot doling out the next serving of schmaltz.

Walking around the concert area, just before the opening, it seemed to be built to hold a lot more people than there were, and surprisingly, the least expensive section was also the least populated.

Still in throwback mode, we were pleasantly surprised when the show actually started on time with local veterans Thermal and A Quarter taking the stage. And boy, were they in a nostalgic mood themselves! Bruce, the frontman, peppered the entire set with anecdotes from their 20-year history (though the setlist itself was mostly newer material), reminiscing about the opportunities theyve had in the past, to open for their musical heroes from Deep Purple to Guns n Roses, and how special this gig was.

With the formalities of the opening act out of the way, it was time for the main draw. While the band set up, a couple of short videos about this years cause, as well as the past initiatives were screened. Another tiny bump of nostalgia, as the musical alumni of Play for a Cause talked about their experiences.

Finally, it was time for Chris, Chris, and Terence to take the stage, accompanied by Tim Walters (guitar and vocals), Simon Carter (keys), Danny Schogger (keys), and Paul Geary (bass and vocals).

Kicking off their set, and throwing our nostalgia motors into overdrive, the Dire Straits Experience built their set around their greatest hits, unleashing the spirited classic Walk of Life super-early in the set, and quickly following up with Brothers in Arms.

The one thing I noticed with a small element of surprise was that all the keys seemed transposed a couple of steps up, for some reason. Nobody else seemed to notice, or care.

I turned my attention back on the experience of it all, and they didnt disappoint, slowing proceedings down with Tunnel of Love and Romeo and Juliet among others, before building up to the grand finale, complete with fireworks, confetti and middle-aged men and women in the audience acting like teenagers as the band took on another Knopfler signature tune, Sultans of Swing.

The screaming middle-aged teenagers and the rest of the audience werent done yet though, and The Dire Straits Experience obliged, seeing as they had saved Money for Nothing for the encore.

Bidding goodbye, Chris White spoke about the power of music, and how great it was to be involved with the cause. The Dire Straits Experience had a great first time in India, and by the looks (and words) of it, theyll be back soon!

Check out what Nikhil Kumar captured at The Dire Straits Experience concert in Gurugram.