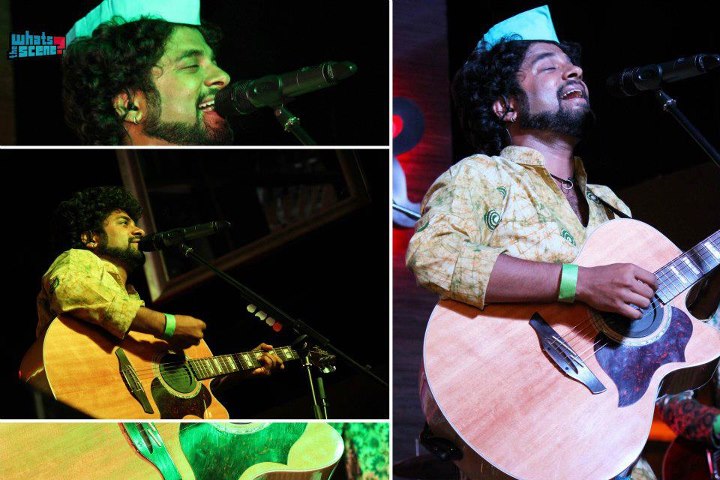 The lead vocalist made his way onto the stage wearing his blue socks and red sneakers- green laces on the left boot and yellow on the right, a green satin dhoti to go with a red top. The bassist was donning one of his many frilly Rajasthani Kurtas and the violinist his glittery suit and white Jodhpuri trousers. Clad in a flowery shirt with shiny purple bellbottoms, the percussionist cum vocalist seemed to have made his way straight out of the sets of a 70s Bollywood movie. The guitarist though, was making a statement with his long locks rather than with his motley robe he usually wears. A diminutive figure with a huge gleaming smile on his face took his place behind the drums and music was all set to roll.  Welcome, Swarathma!

Yamunotsav12- an initiative by a NGO Sweccha, saw the band performing in Delhi on their recent Restless Tour promoting their latest album Topiwalleh. This time it was for the English-speaking-white-collared bourgeois munching on Blackberries and Apples at the India Habitat Centre. Commemorating the World Environment Day celebrations, Swarathma, with its kaleidoscopic brand of music was the perfect choice to preach some socially important, yet often ignored lessons with some fun, humour and wit.

The troubadours from Bangalore started off with Aaj ki Taaza Fikar; the bands take on yellow journalism and the sensationalist-TRP-hungry media. The crowd was still shuffling inside the IHC amphitheatre and gradually picking up on the frenzy with Montrys adept drumming and Varuns fluency on his Gibson Les Paul. Meanwhile, Jishnu Dasgupta, the bassist halted to give a sneak peek into their next song, Since we are at Yamunotsav, this song too has been written for the plight of a river and it strikes a chord. To which Vasu, the frontman of the band and an eccentric oddball with curly hair jeered jocularly, Which Chord is it by the way? The audience exploded into a fit of laughter and Jishnu remarked, D major. Pyaasi– the song that saw the band rise into fame is the voice of River Cauvery, as it reacts to the violence that broke out during the water sharing issue between the two states down south.

Swarathmas lyrics have always been the trailblazers of social change. Their latest sophomore album Topiwalleh is their smirk at the topi-wearing corrupt politicians. Jishnu, who perfected his PR skills and the vernacular Bihari accent at XLRI Jamshedpur claimed, Ab vaqt hai political debate ka (Now, its the time for a political debate). They churned out many of their songs from the recent album, each one distinctly different from the other, be it the composition or the social message it imparts. Topiwalleh is a cheesy number while Koorane with its typically heavy metal riff unleashes the animalistic instincts within. Naane Daari is powerful and the latest heavy artillery in Swarathmas arsenal these days.

Vasu, then suddenly with his Kacchi Ghodi (steed) thats long been associated to the bands brand image; ran through the stage amidst the huge cheers in the crowd and Jishnu who does most of the talking for the band declared, It is story-telling time. They shelled out their hit from the first album Pyaar ke rang– a song of love that has been on their set-list since the Soundpad days. Another song that hardly ever gives a miss in their live shows is Yeshu Allah aur Krishna which is all about communal harmony, Kabirs teachings and Devotional Atyachaar. And the latest addition Duur Kinara -a sensational collaboration with Shubha Mudgal reverberates loud in ones head long after the last note has been played.

Varuns strumming on the guitar has heavy western influences and Sanjeevs mellifluous violin lines complement the music to form an impeccable fusion of rock and folk. Montry and Pavans percussions are tight, Jishnus bass and melodies perfect.  Vasus powerful vocals and the raw acoustic guitar guarantee unadulterated fun. But, Swarathma isnt just about their music. They have their marketing skills sharpened and they know how to sell their brand. The myriad colours they flaunt on the stage can be seen on their cover art or their promotional posters. Be it the Action Replay concerts for the underprivileged and disabled kids or the concerts for social causes such as Yamunotsav, ever since they took the Indian folk-rock genre by storm, they have won many friends and earned accolades all along their way.

In the end, Swarathmas colourful music does more than putting a smile on your face. It makes you think, it inspires you.

Harley Rock Riders – TAAQ and Half Step Down at Kyra, Bangalore