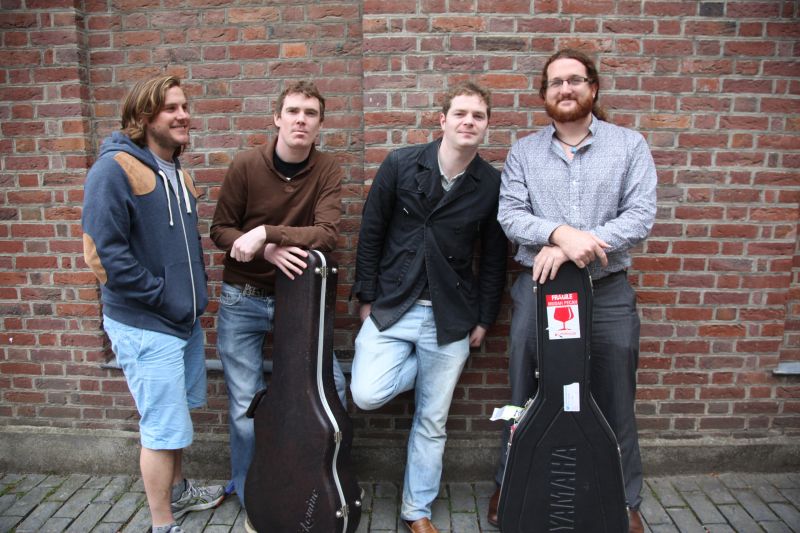 Irish? Isn’t Hibernian a Scottish football club? Im pretty sure I read about the place in Trainspotting. Trainspotting is set in Glasgow, no?

I had broadcast messages to people to get them to show up for The Hibernian Jungle show on the 18th of September, but convincing even one person was beyond me. The best or/and worst reason I received in rejection was, Dude, this gig has been pimped on the radio  thats a sure sign that its going to be awful.

In hindsight, Im so glad that everyone flaked on me, because Id have felt extremely guilty to have made any of them plonk down five hundred rupees to watch this concert.

Indulge me this paragraph for expanding upon what I believe a gig should be  and, of course, feel free to disagree. In my estimation, a gig of any kind, especially one of a band from far-off lands, even if within the limited confines of Hard Rock Cafe (then again, Poets of the Fall played there too), implies that the gig/concert/rose of any name is going to be the center of attention. Fine, Im even conceding that they need not be the center of attention  only that when entry to an establishment is ticketed, with those tickets predicated upon a performance of a musical ilk, that said performance will be given due respect. Of course, its not the bands fault. Maybe it isnt even HRCs fault. Its my fault for expecting it to be so.

Given that it was HRC, my expectations were low to begin with; yet, like a stupid kitten that keeps darting its tongue into hot milk, I keep going back for more. The reason Id desperately tried to secure company for the show was that I knew that, unless it was a high-flying band like Poets of the Fall, the venue was going to do everything in its power to make itself seem as normal as possible, viz. severely antagonise anyone present to solely catch the band.

Walk into the venue and look to your left (away from the bar), and… its like every other day at the Hard Rock Cafe. The tables are set and the patrons are seated peacefully, sipping their cocktails and soiling their fingers while dipping into the guacamole. Walk in that direction and wear blinkers, and youd swear that the music was canned.

Look to your right, and you can see the bar through the doorways, and seated above are three Irishmen. Only about an hour later did the surface reveal itself to contain a fourth Irishman, wholly eclipsed by the frontman, who had to take to standing on a table and gyrating to mark his territory. My initial suspicion was that he was Indian, and so was hidden behind the other three; twas not to be. Anyway, who cares about seating arrangements? Im not Jaya Bachchan in the Rajya Sabha.

Even in front of the stage, there was only a smattering of a crowd. A good barometer for a venue is to look at how comfortable it makes a free-standing individual feel. HRC fails abysmally  attending the concert alone, I took to sticking by a wall because one would have seemed utterly deranged to dare to, you know, just stand in front of the stage (yes, Im going to keep saying stage and not stage  anyone whos been to HRC, Bangalore will know the difference) and enjoy the music. Though, to be fair, there were a few people enjoying themselves (all in groups), including a bunch of Irish people who sure do seem like they know a good time, and one portly gent who I presumed was affiliated to Jameson whisky, the chaps who brought Hibernian Jungle down to India. But, apart from the loyal Irish (and their Indian friends) and capitalists, nobody really seemed to be there for the music. All others seemed like theyd just stumbled into the bar in pursuit of a good time, and just happened to stay on for the flesh jukebox.

If you’ve noticed that I’ve spent 600 words talking about various things that are not the band or the music, well done and have a cookie. Now, The Hibernian Jungle were described in the posters, to paraphrase and recall from memory, as some of the best young Irish musicians who were going to rock India with their reinterpretations of other bands (ha. Reinterpretations, it seems) and their own mix of original bluesy Irish rock.

Im going to call the spade  theyre a bar band.

Im sure that theyre a perfectly nice bunch of people, and they can definitely handle their instruments (specific props to the bassist), but to what end? Playing covers 8500 kms away from home? Confession  out of bitter disappointment, I walked out on them when they took their break, which came around an hour into the set. Perhaps they played the best set of originals ever, ever, ever after that (or perhaps they broke out the Thin Lizzy and U2 numbers), but theyre awful at planning their set list if theyd padded out the first hour with covers. And not just any covers, but typical covers  they actually started promisingly by kicking off with The Black Keys Gold on the Ceiling, but then degraded into a retro radio cesspool soup of the Beatles, Simon and Garfunkel, CCR and the like.

I cant decry their intentions  if I were making my bread playing covers and Vijay Mallya told me that hes going to take me around Ireland, Id jump at the chance. Young Irish band given the opportunity to tour India? Why not, I ask you, why not? All of this is conjecture, of course, but Id assume that Jameson had instructed them to shill their product every now and then, which is what passed off for banter between songs. Again, I cant find fault with the band, but I can whine about the manner in which the night was packaged  as an evening of music, and not a live recreation of an ad-supported Winamp playlist.

I guess the red flag I shouldve heeded was the fact that they played two gigs in Bangalore. What kind of legitimate band does that? Unless they were told that Indiranagar and M.G. Road were two different cities, but youd think that the organizers would’ve at least had the decency to switch one of those gigs to Malleshwaram then, to have a plausible explanation that, yes, they are in fact two different cities.

Still, maybe the band had a sense of irony  theyd slipped Neil Young into their set list. Hed tell you a thing or two about selling out.