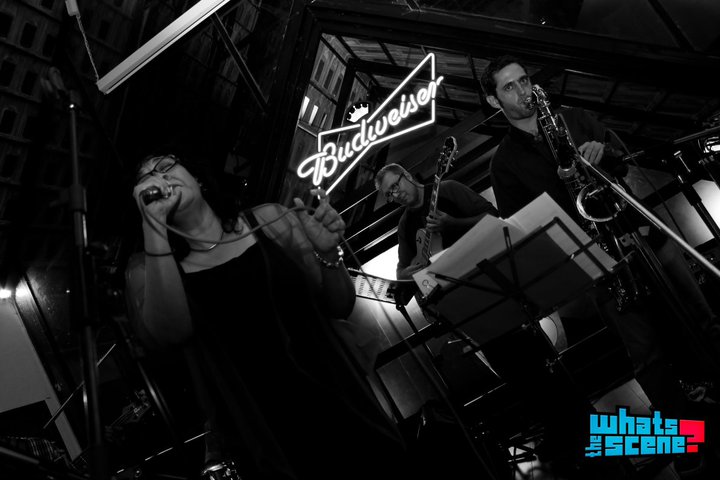 WOW! was the first word that came to my mind when I walked past the entrance. The place looks huge, with seating arranged on three levels, with the stage set at the middle level. I noticed that the listening experience with respect to volume and quality differed over various areas of the restaurant. But I guess this provides customers with varying options on whether you want to get more involved with the band, or sit in a relatively peaceful place with the music playing in the background. I would suggest placing oneself either on the left of the stage on the first floor or the right side of the second floor, as close to the railing as possible for the best listening experience.

T-O-I-T, how do you pronounce it? we asked the owner. Its Toit! (rhyming with Detroit), he replied, Not ‘twa’ (like the French) or To it or anything else. When we were younger, if something was good, it was tight; if a girl was good looking, she was tight. Also, in the local slang, when someone is drunk, that person is said to be tight. And that is exactly what Toit is all about  a slightly and deliberately mispronounced version of the word tight.

A band playing a complete jazz set at a restaurant is indeed a rarity in Bangalore, unless of course it is part of a jazz festival or perhaps one of those upscale snooty places frequented and infested by the supposedly high-class junta. If I were to describe the musical experience of the evening in one word, that word would be ‘smooth’. Most jazz acts that I have seen usually throw in quite a few old English classics and pass it off as Jazz, but that was not the case with this band. Ramjee Chandran was a pleasure to listen to, belting out fine solos and resounding chords on his Epiphone hollow-body semi-acoustic. Naveen Kumar kept the groove going and wowed the audience with an occasional bass solo. Matt Littlewood showed finesse on the saxophone, switching between the tenor and soprano sax as the track demanded. Each trill on the lows of the tenor and every one of the altissimo notes he hit was spot-on making it all a true jazz affair. Amit Mirchandani displayed amazing control on the drums – he made them sound as prominent as necessary during the drum solo spots and at times, as soft as a whisper. Aman Mahajan blended in really well on the keys; his mastery over the notes as well as his ability to fill up the gaps was mesmerizing! Radhas vocals was simply superb; there was a pleasant huskiness about her voice that went well with the overall feel.

The band kicked off the evening with a couple of old jazz standards, and went on to play a jumpy, bossa-nova number.  The last track of the first set ended with the band’s take on the famous Duke Ellington track ‘Caravan’ – the twist was that it was a lyrical version, and it started off with a jumpy, gypsy-esque aalaap which gave it that special Indianized touch. The band rendered a mellower version of ‘Is you is or is you aint my baby’ which was nice, but I would have preferred a slightly sped-up, energetic version. Listening to the blues ballad ‘Aint got nothing but the blues’ was sheer pleasure. Karan Joseph made a guest appearance on the keys for the song, and received a hearty round of applause from the audience. My personal favorite, however, for the night was ‘Lets do it’. As the evening progressed, the number of jazz lovers in the audience seemed to have more than doubled. The performance ended with a lyrical version of Dave Brubecks ‘Take 5′ incorporating solos from every member of the band. The drummer blew everyones mind away with a kickass drum solo.

A special mention must go to the venue for accentuating the overall feel of the event. With a snazzy atmosphere, moderately priced food and drinks (which included lip-smacking Chicken Piccata and superb mocktails) and friendly staff, this place is definitely something that musicians and music lovers can look forward to frequent in the near future. To sum it all up, the evening was Toit!