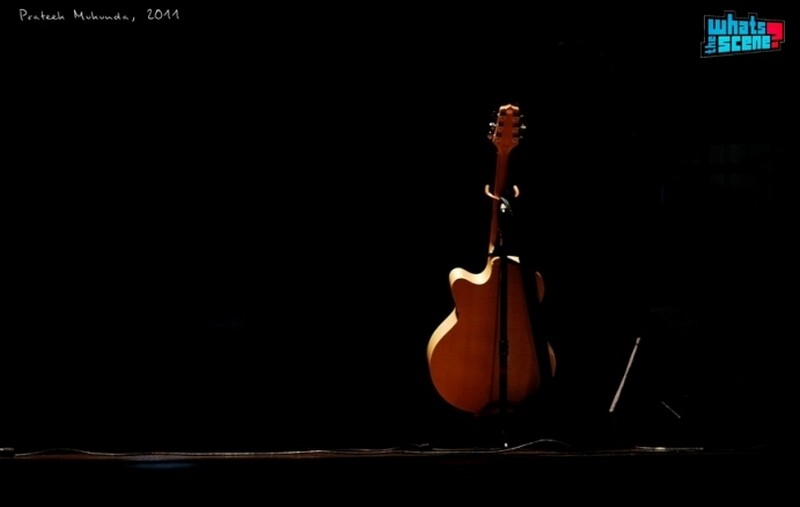 I made my way to the Convention Hall with a million questions running through my mind. Would I witness yet another show of forced humility and rehearsed answers? Or perhaps some half-baked, half-hearted replies to my painstakingly constructed questions? On entering the hall, I let out a groan as I noticed that the sound check was still on. ‘Oh great!’, I said to myself, ‘good luck rounding up the band members in one place for the interview!’

A minute passed, and I found these thoughts dissolving into oblivion. I let the music wash over me; the effect was hard to describe  a lot like balm to the restless soul, and this was only the sound check! As I sank into the chair in an inconspicuous corner of the hall, I heard Vasu call out to his band-mates  Guys, this is Priyanka from Whats The Scene, shes here to interview us. A warm welcome followed. We owe her this one for a long time now, said Jishnu as he greeted me with a hug. I recalled the interview-with-Swarathma-that-hadnt-happened at Hard Rock Café, Bangalore, I remember being quite miffed that day because despite our having reached the venue hours in advance, the TV9 crew who had walked in much later with a video camera had left with an interview, but not us!  I found solace from the fact that I was going to interview the band right here, in my campus. 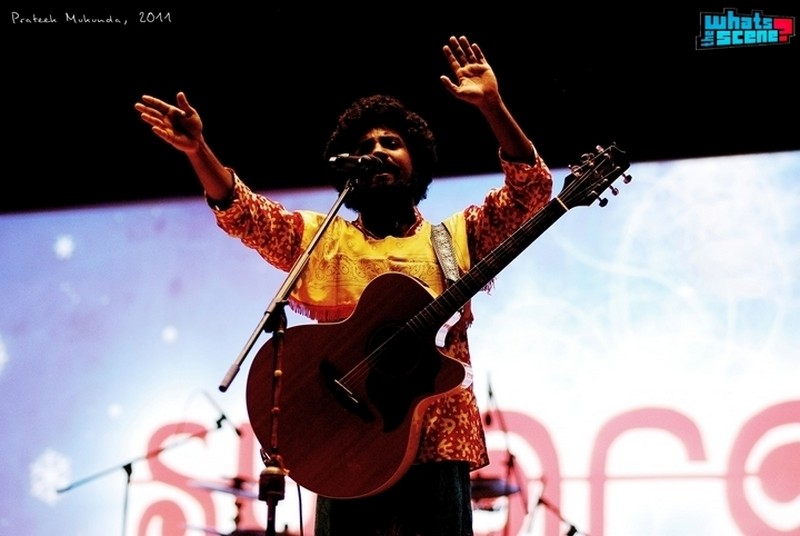 I have interviewed bands before and, most of the time, this is how it works  one person from the band (if youre lucky, two) answers most of the questions while the others look on. This time, however, it was different: within a minute, all the members of the band were sitting around me, taking turns to answer the questions I rolled out to them. Each question was treated with the same level of importance and interest. Jishnu with his effortless humour kept the mood light and prevented the rather long interview from becoming a drag. None of that Were taking the stage now- please wrap this up quickly talk; instead, they took turns getting dressed while the rest continued to answer my questions. Finally, five minutes before they took to the stage, I wrapped up the interview and took my seat in the audience. A dash of colour! The stage stood completely transformed  vibrant and enlivened by a group of six people in colourful attire! This was what I expected from the show  they were going to play one song after another, the songs were going to be awesome and wed all applaud and retire to the bus bay. Little did I know that we had some surprises in store for us! 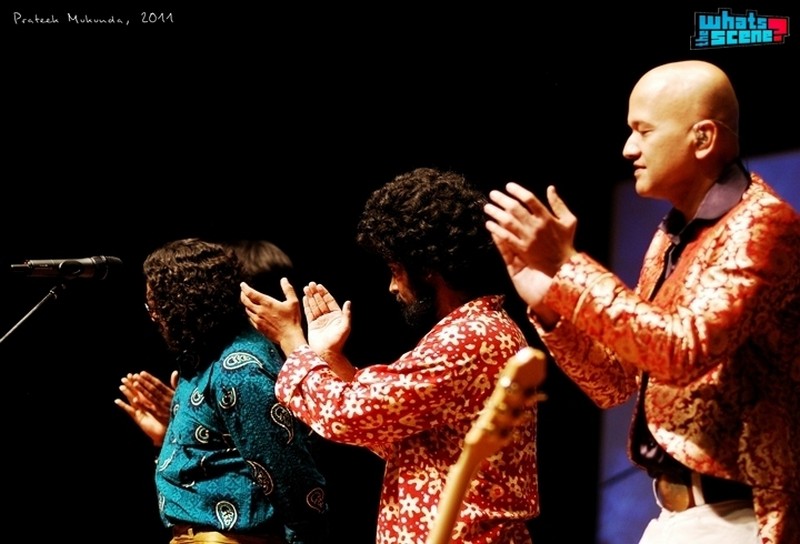 I had wondered backstage why the band felt the need to wear these costumes, but as the show progressed, it became apparent to me  well, maybe its just my imagination but it seemed to me as if they were wearing exactly what they feel inside! Vasu, like a free spirit, was blissfully lost in the music, dancing with abandon, like a leaf flitting about in strong winds- the perfect front man. The flamboyant orange pattern on his blue pyjama, the bright green shoes with colourful laces, the silver ring tied with a black thread around his throat that danced about with every note he hit  all oddly endearing! 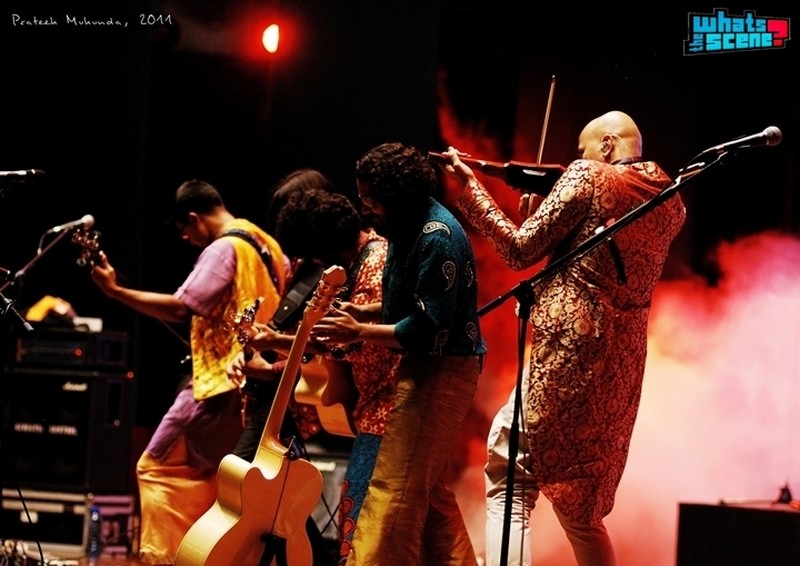 It soon dawned on me that Swarathma has six front men. Jishnu, with his curled mojdis and embellished yellow jacket over a silk kurta, kept the crowd engrossed as much with his bass playing as with his ability to be funny, charming and endearing.  Montry seemed rather vocal and expressive with his drumming, which made up for the fact that hes rather quiet in person. Sanjeev, dressed in his peculiar and rather unique coat, looked like a magician captivating the audience with the intoxicating tunes he conjured out of his violin. Pavan added the extra zing to the songs with the precise percussion. Varuns brilliance on the electric guitar wasnt lost on the audience. Im not too sure if its his style, but Varun seemed a little aloof onstage when compared to the rest of the band. 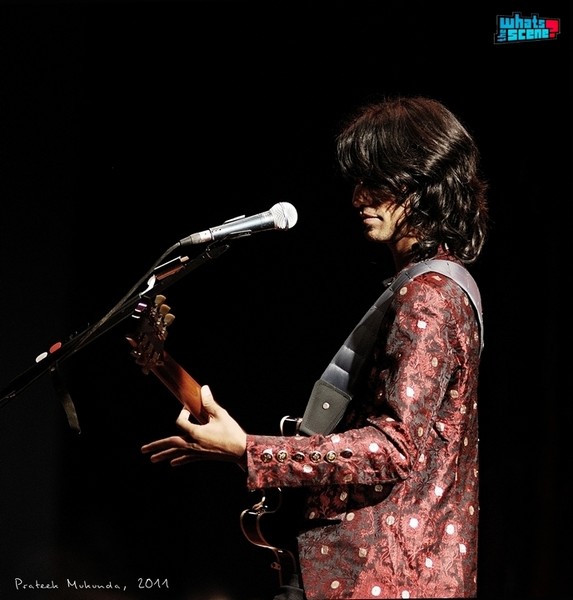 ‘Mukhota’, ‘Khul Ja Re’, ‘Patte Saare’,’Topiwaale’, ‘E Bhoomi’, ‘Yeshu Allah Aur Krishna’ and ‘Pyaasi’ seemed to get the best response from the crowd. But the song that appealed to me the most personally was ‘Gum’  this one was about child sexual abuse. I remember closing my eyes to grasp the feel of the song. The mood shifted from merry to brooding, as the dark tune engulfed my senses and took me through the torment that a victim would probably go through. As Vasu imitated the cries of a little child, the haunting tunes from the violin stirred us out of our indifference: and when I opened my eyes, there they stood  six protestors urging us to unmask the evil doers who live amongst us, unpunished. The mood was lightened considerably by the next song that featured a riveting jugalbandi between the percussionists. Vasus theatricals were absolutely brilliant  the man is a consummate artist: from design to theatre to music, hes only finding new means of expressing the myriad of emotions within. 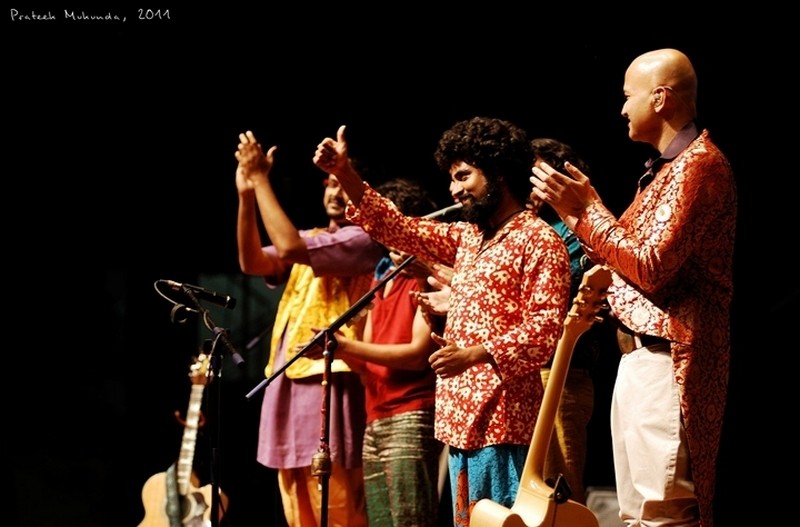 As Vasu walked up to the members of the audience, engaged them in conversation, made them dance, formed a human train that ran all around the convention hall, I realized the magnitude of the feat the band had accomplished. Never before had I witnessed anyone work their magic on people to the extent of pulling them out of the shells they surround themselves with all the time. Ladies and gentlemen, this is Swarathma!

Swarathma at the National Association for the Blind, Bangalore