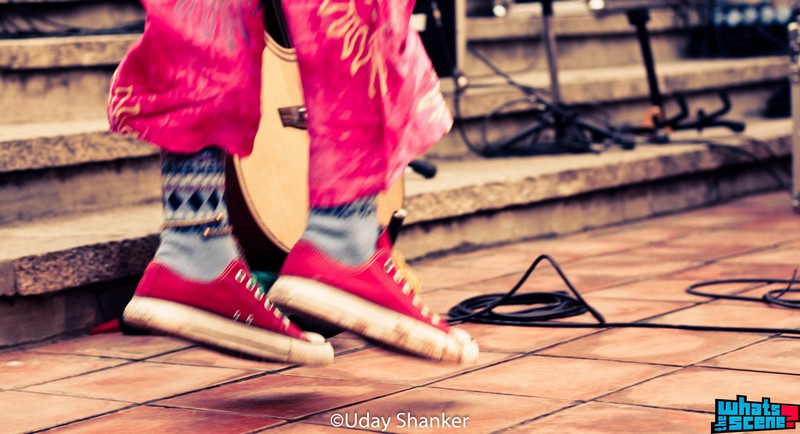 Strike out one of the above, say sight, from the list of senses, and you’ll find that the other senses clamour to catch hold of what passes through our consciousness. On the afternoon of Saturday, October 22, 2011, Swarathma played to almost 200 kids who were partially or wholly blind at the National Association for the Blind. NAB is the only organization in Karnataka that preaches and practices an inclusive model of education. In this model, blind children are encouraged go to normal schools instead of blind schools which would help them to pursue higher education after schooling.

Swarathma’s performance on that day marked the end of a four day fest in which blind children from different parts of the state got the opportunity to interact with each other as well as normal school-going children. The show was sponsored by Levi’s that identifies pioneers who are making a positive change in the world, as part of their Go Forth Campaign. 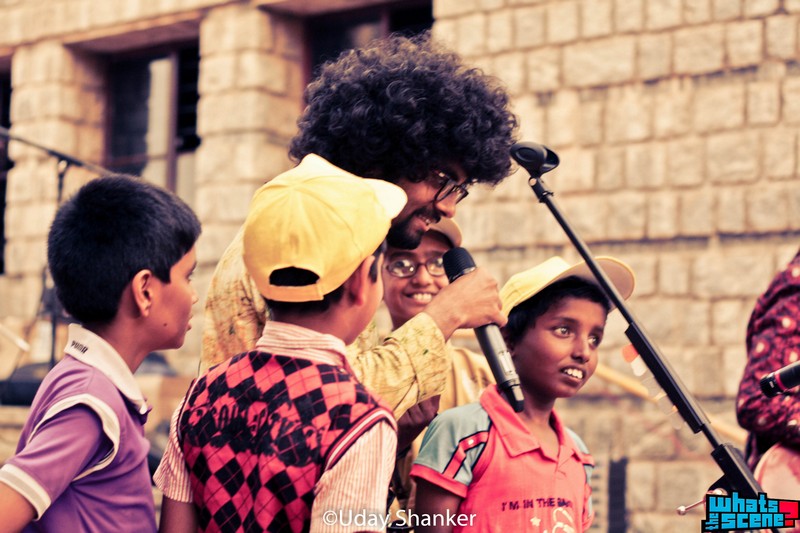 I entered a stone quadrangle at the National Association for the Blind to find Vasu Dixit in a yellow shirt, pink trousers holding an acoustic guitar. He greeted the crowd with “Illi Bandha Ellaa Makkalige Namaskara!” (Greetings to all the kids present here) He started the set with a Kannada song ‘Ell Hogali Shivane’ that set the tone for the evening. I was glad the sound system worked well in a quadrangle unlike a few pubs where a few notes are far from clear. The Carnatic violin and the tabla were reminiscent of the Antaragni days that I quite miss hearing in these times. 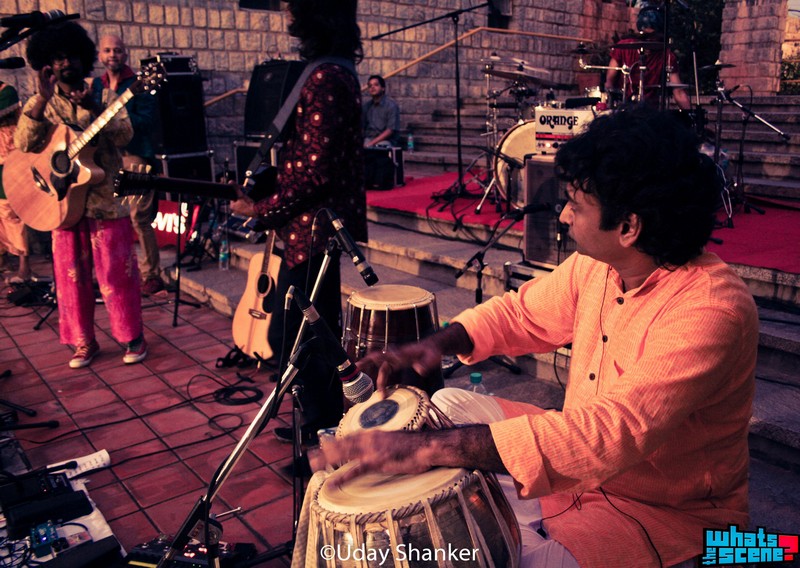 They then moved on to an instrumental, highlighted by ragas sung by Vasu and Jishnu. Just when the show seemed to be a one-sided affair, Vasu brought a child up onstage and asked him to sing to the crowd, for a few minutes. After a few lines, Vasu joked “Neenu jaasthi haadidhre, ninnaney kelbeku antha heluthaarey!” (If you sing for too long, the audience will insist that they want to listen only to you) The band then moved onto a Hindi number ‘Barsenge’. It was then that their sound settled to what their genre signified.

‘Pyaasi’, followed next, highlighted by the violin played skillfully by Sanjeev – this is a song about how Karnataka and Tamil Nadu fought over the river Kaveri, neither giving back what the river so generously offered to the two states.

‘Khul Ja Re‘ followed a slow, fluid ‘Pyaasi’, an interesting number accompanied by three percussionists. With each number Swarathma’s versatility seemed to grow. Their next number however took the focus away from their folky outlook. 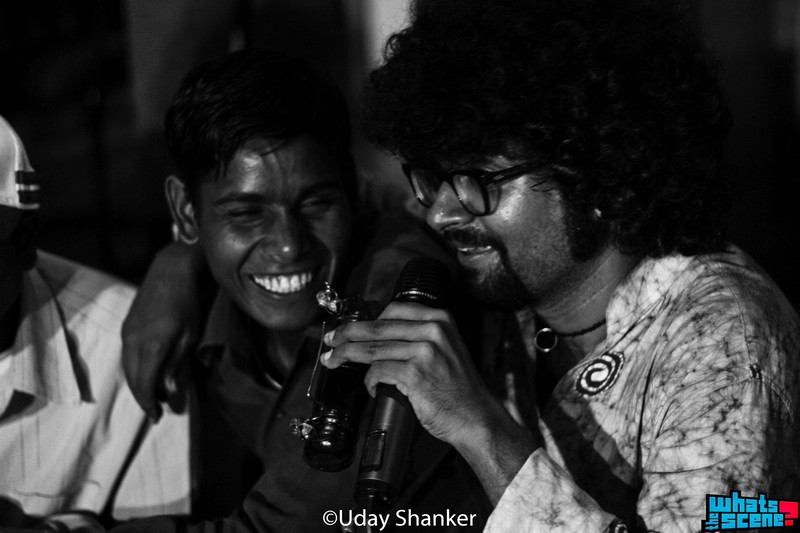 ‘Koorane’ began with a Sabbath-ish riff that sent shivers down my spine and was infused with a lot of howling by Vasu, and Varun (lead guitars). Our photographer for the evening, Uday, mentioned to me Varun’s use of the ‘talkbox’. Something that many artists hadn’t been noticed using.

When Vasu decided to treat the crowd to another Kannada song, it was received by the audience’s approval with a resounding applause. ‘Ee Bhoomi’ was up next and Vasu got down to the crowd, holding in his hands red and yellow pom-poms that doubled up as cymbals as he danced around in front of the stage. The manner in which he infected the crowd was admirable and the effect it had on the children almost seemed miraculous given the fact that their only source of grasping what the band had to offer was through their sound – Swarathma created magic!

The band ended their little gig with ‘Pyaar Re Rang’, a song that drew the folk sounds of Rajasthan into the heart of Bangalore. An upbeat number after which Vasu got into the crowd once again, chatting up with the little children, bringing them closer to the magic that the band just created. At one point during the gig, the little kids were so enamored by the music that they had got onto their feet and danced in the middle of the courtyard! 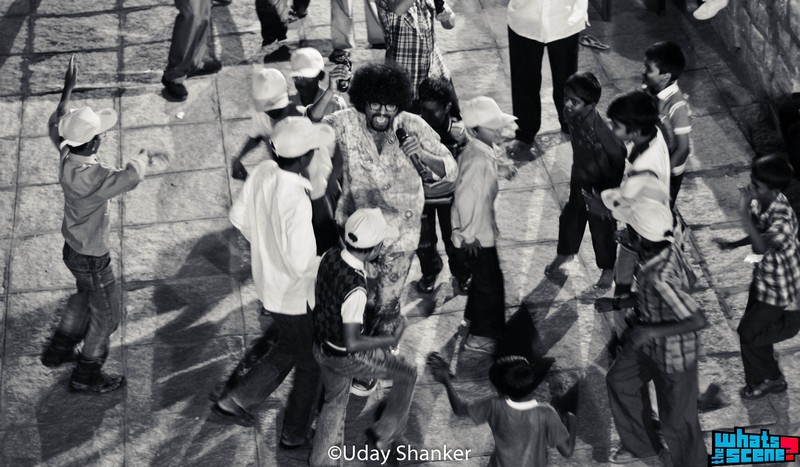 Never have I witnessed a gig before that cut through the heart of the crowd with so much ease, and held their attention right till the end making for such a glorious experience. I doubt I’ll ever come across another gig that is this interactive and heartwarming.

I caught up with Vasu before the band could pack up and leave for the day; on asking him what challenges did the band face during the show considering the fact that the kids couldn’t see them, he said that “One can have all his five senses perfectly intact and still be deaf and blind. We’ve played to shows where the audience is half-drunk or passed out, in places that have the best music systems and sound and yet we left unfulfilled and joyless. There are other shows where we’ve coaxed the audience into the space that WE’VE created, and drawn them in. Such shows and this one, we have loved and left with happiness in our hearts. I think that’s what counts.”