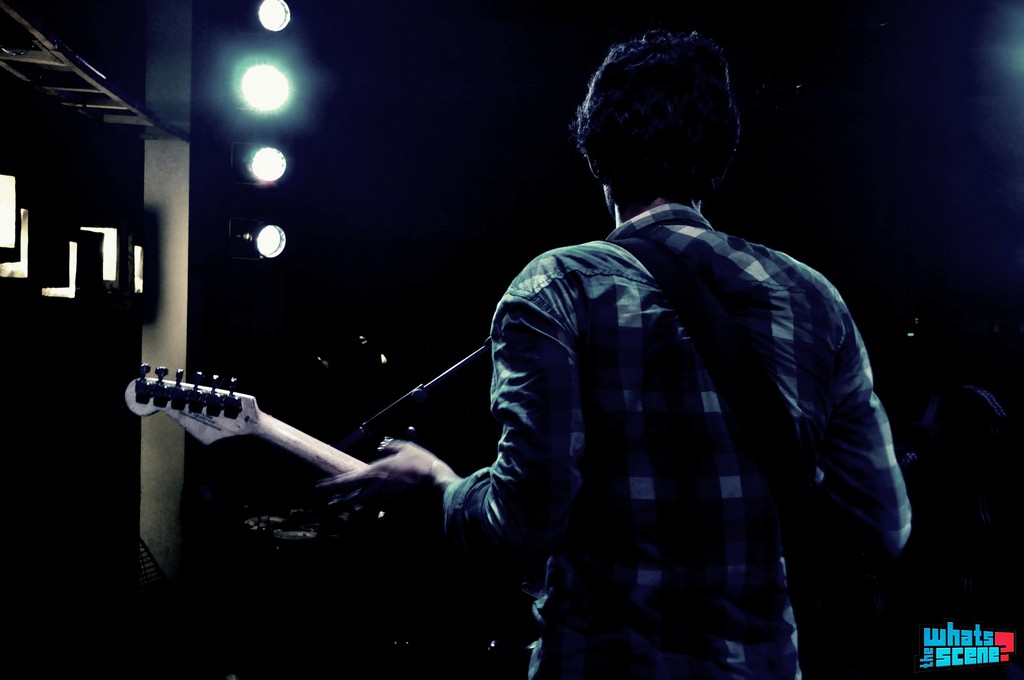 Sunday evening brought two immensely talented bands Parvaaz and Mad Orange Fireworks to the same stage at The Kyra Theatre. I was expecting an odd combination of genres since both bands have very different influences. Two odds make it even and on that note, I entered Kyra to find the place quite empty, which would not remain that way towards the end of the show.

Parvaaz was up first with a one-of-a-kind genre that they call ‘Psychedelic Sufi Blues’. I had witnessed the band perform a couple of years back when they had just started out and they seemed to have a lot of potential back then,and it felt great to see them once again after so long with a lot of noteworthy improvements. They started off with a song called ‘Marika’, which helped set the tone for a fabulous evening.

‘Blue Space’, an instrumental, was rightly placed in the core of their set. The band got to showcase their abilities and surely, did not fail. The stops and the sudden off-time signature starts merged very well without any hiccups.The vocalist and the drummer deserve special mention as they simply stole the show. The vocalist sang with pure panache, hitting extremely high notes in many of the songs. The drummer was splendid with the clarity of his ghost notes and accents.A lot of strange percussion and wind instruments such as a Bell Bowl and Spring Drums were incorporated. This, along with brilliant patches and lights, through the show, made it ‘psychedelic’ in its true sense.

Other songs such as ‘Behosh’, ‘Itne Arase ke Baad’, ‘Loli Matti Laii’ (Kashmiri for caring) were spaced evenly so as to provide their set with just the right balance. It was great to see Khalid, the vocalist, bring along a lot of Kashmiri influences into the songs. Folks in the audience were singing along to most of the songs that the band played and seemed to be having a very good time. ‘Azadi’, one of the band’s first songs, was a fine choice to finish their set; there were a lot of notable improvements with respect to the structure of the song, apart from adding an acoustic guitar, which made it the finest out of the lot. Starting off with the Bell Bowl, ‘Azadi’ progressed into a Sufi-Psychedelic mix. The amount of effort gone into bettering the song was very evident through the small impromptu jam with which they wound up the song.

There were a few minor things that the band could improve – for instance, the snare wasn’t audible amidst the vocals, guitars and bass which could either be attributed to volume issues or the lack of energy.The band’s front-man could have introduced all the songs, rather than the guitarist introducing a few of them in between. However, their performance on the whole was remarkable.

Mad Orange Fireworks took to the stage after Parvaaz and the crowd was quite thrilled to find out what was in store. I had seen them perform earlier as well and was quite impressed with their songs and their onstage chemistry. They had a bit of starting trouble and took a good 10 minutes for their soundcheck. However, the band had some great material up their sleeve and seemed to have mellowed down a lot since the last time I saw them.Their set was extremely tight with almost no flaws. Their rendition of Michael Jackson’s ‘The Way You Make Me Feel’ instantly energized the crowd. The bassist, in particular, was very groovy with his bass lines, keeping the song in rhythm. The guitarist, as well, was splendid with his progressions and chord solos. The drummer did what he was supposed to -give foundation to the song making it rock-solid and taut.

‘Empty Saturday’, one of their originals, started off with a superb bass drill. The guitar tone blended perfectly with the bass. The drummer with his hi-hat work made the song perfect. It was watertight, barring the occasional sloppiness of the drummer with his sticks.

‘Confusing State’, another original, was quite catchy at first, but later on, it started to become a tad monotonous and the drums and bass became very repetitive after a while. The highlight of the evening was their version of ‘I Want You’ by The Beatles which was very jazz-influenced. They jumped into a spontaneous jam after the song which was surely the best jam I have heard. They were flawless. Other songs such as ‘It’s Just Me’, ‘Cool Boy’, and ‘Who Did You Think I Was’ by the John Mayer Trio were songs that were rather enjoyable.

The only flipside to their set was the lack of energy. The songs sounded a bit dry though their material was amazing. Their vocal harmonies were inaudible for most songs; although in ‘The Way You Make Me Feel’ they were spot on. The trio as a whole shared terrific chemistry and was super tight. Rather than just playing for the audience, it was evident that they have a good deal of fun on stage as well. They also lived up to their “Orange Rock” genre, which I assume refers to joyful and happy songs.

All in all, it was great to watch Parvaaz and Mad Orange Fireworks perform together and they really gave the crowd their money’s worth. Without doubt, these two bands should feature on your ‘must attend’ list!