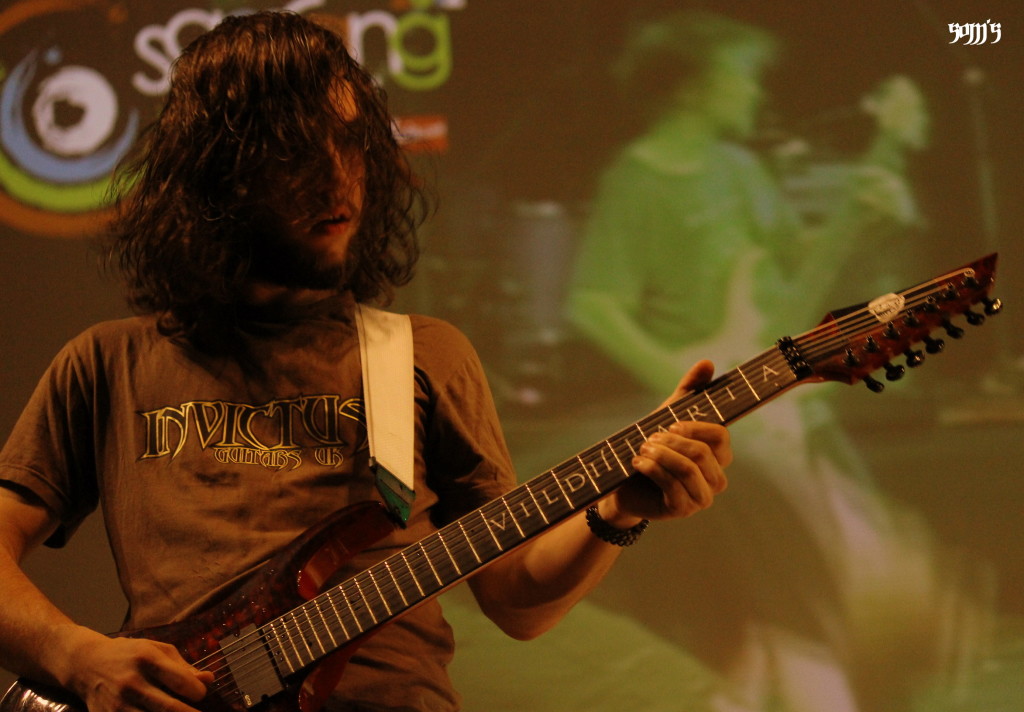 The open air theatre of Saarang has been graced by Metal giants in the previous years, more specifically Swedish bands in the genre like Opeth, Pain of Salvation and Hammerfall. This year the 7-piece ambient/djent band Vildhjarta from Sweden visited the festival along with Indian metal bands Inner Sanctum, Blind Image and Scribe.

The show started off as dusk was falling, with performances from The Family Cheese, Crypted and 83 Mph, the finalists of Decibels – Saarang’s competition for semi-professional bands. Crypted was announced as the winner with The Family Cheese as the runner-up. As this mini-battle was taking place, the Open Air Theatre slowly started seeing a swarm of black tees entering the arena in high spirits. 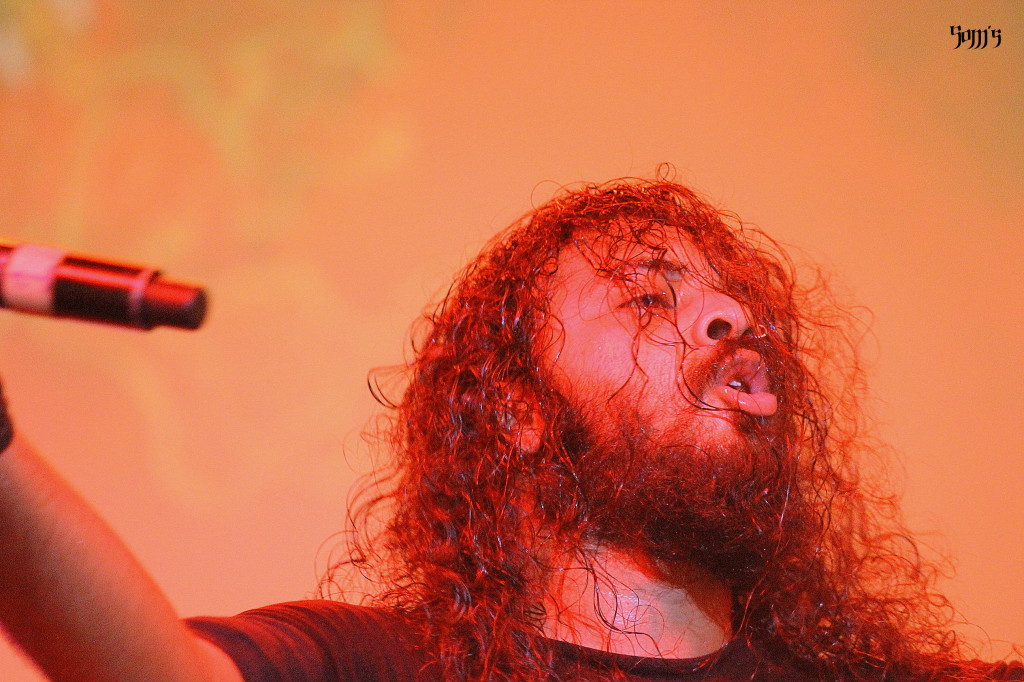 Inner Sanctum soon took the stage by storm and started off their set and it didn’t take long for the crowd to start head banging and raising their fists in the air, but we soon came to the realize that the sound mix was quite absurd. The drummer’s kicks were barely audible and the bass was missing at certain points. However, the nearly-synchronized headbanging by the members of Inner Sanctum and vocalist Gaurav Basu’s windmilling and powerful vocals kept the crowd engaged. By their final track, ‘The Guardian’ the sound issue was sorted out. Nevertheless, Inner Sanctum was very professional about it and got the crowd geared up for the rest of the night. 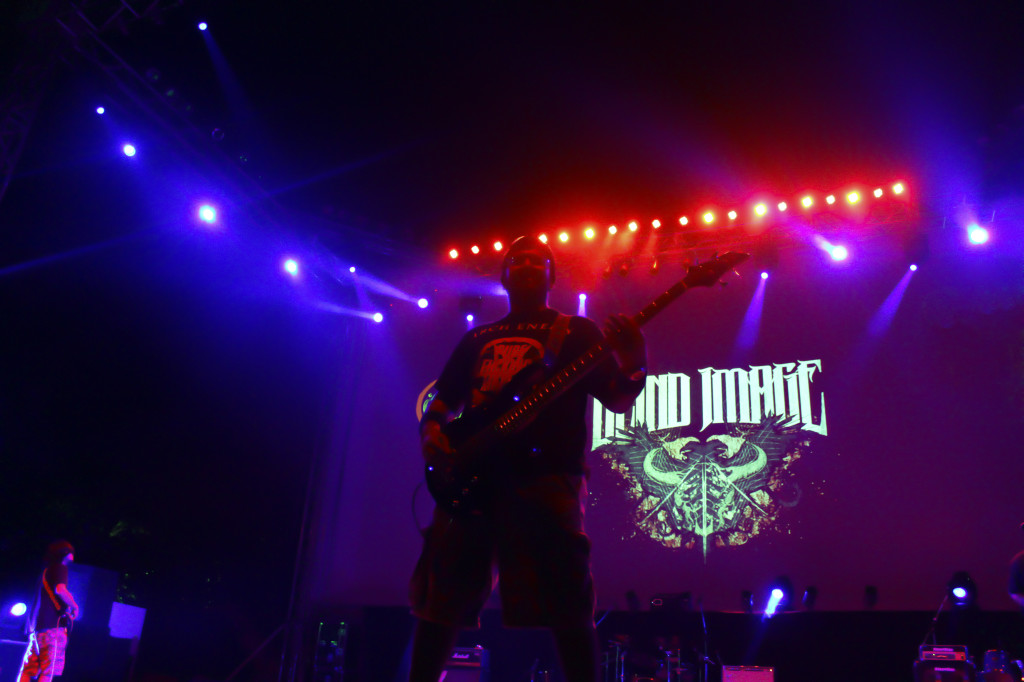 Blind Image was next on stage and right when the crowd believed that the sound issues were fixed, they were plagued by yet another series of sound issues; only this time they were much worse. As soon as they started off with their opening track ‘Deciphered’ there were absolutely no guitars on the PA and this continued with the monitors going off for the bass player and drummer, and guitarist Pranav had his Pod X3’s adapter short circuited due to a power surge. Vocalist Noble Luke kept the crowd engaged amongst the confusion but owing to time constraints, the band had to end it with a short set filled with technical issues. Having heard that Blind Image have a reputation for being a very good live act, I thought it quite unfortunate that the band had to go through such terrible sound issues. Many Chennai metalheads were disappointed as they had seen Blind Image previously in several gigs where the band had put up amazing shows and the crowd expressed open disapproval of the constant technical issues by shouting “What the f**k!” along with vocalist Noble Luke. Word got around that there was a “bug” in the digital console that kept altering any equalizing and mixing that was introduced. 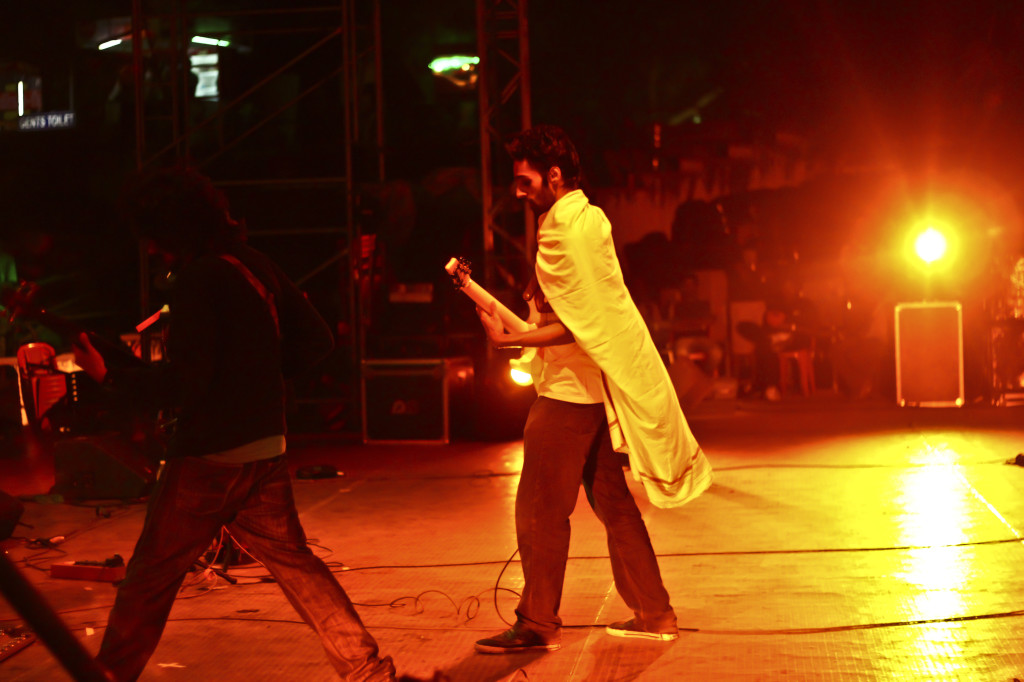 Next up were the much awaited Mumbaikars, Scribe. The band started off with a song famous for being a Rajnikanth intro song that immediately got the crowd’s attention, with whistles and cheers from all around. While vocalist Vishwesh put paid to sour moods caused by the sound issues by talking to the crowds in Tamil, the sound issues were tackled by Scribe’s own sound engineer playing the role of a much-needed knight in shining armour! The band had to skip a few songs including ‘Street Archana vs. Vice Varsha’ due to the on-stage sound issues. Overall, the crowd seemed to have thoroughly enjoyed Scribe with mosh pits and circle pits in the OAT. First-time metal listeners and IIT volunteers themselves were seen headbanging in groups. Scribe’s track ‘Buddy’ saw members from Inner Sanctum, Blind Image, and Crypted headbanging and moshing on stage. Even a couple of members from Vildhjarta joined them and the OAT seemed to be suddenly engulfed by a bout of madness at this point!

After a careful inspection of the technical issues, Vildhjarta was ready with a line-up that included three guitarists, two vocalists, a bass player and a drummer- something that is very uncommon for metal bands in general. However, the three-guitarist-trend has been noted in popular bands like the American Periphery in recent times. 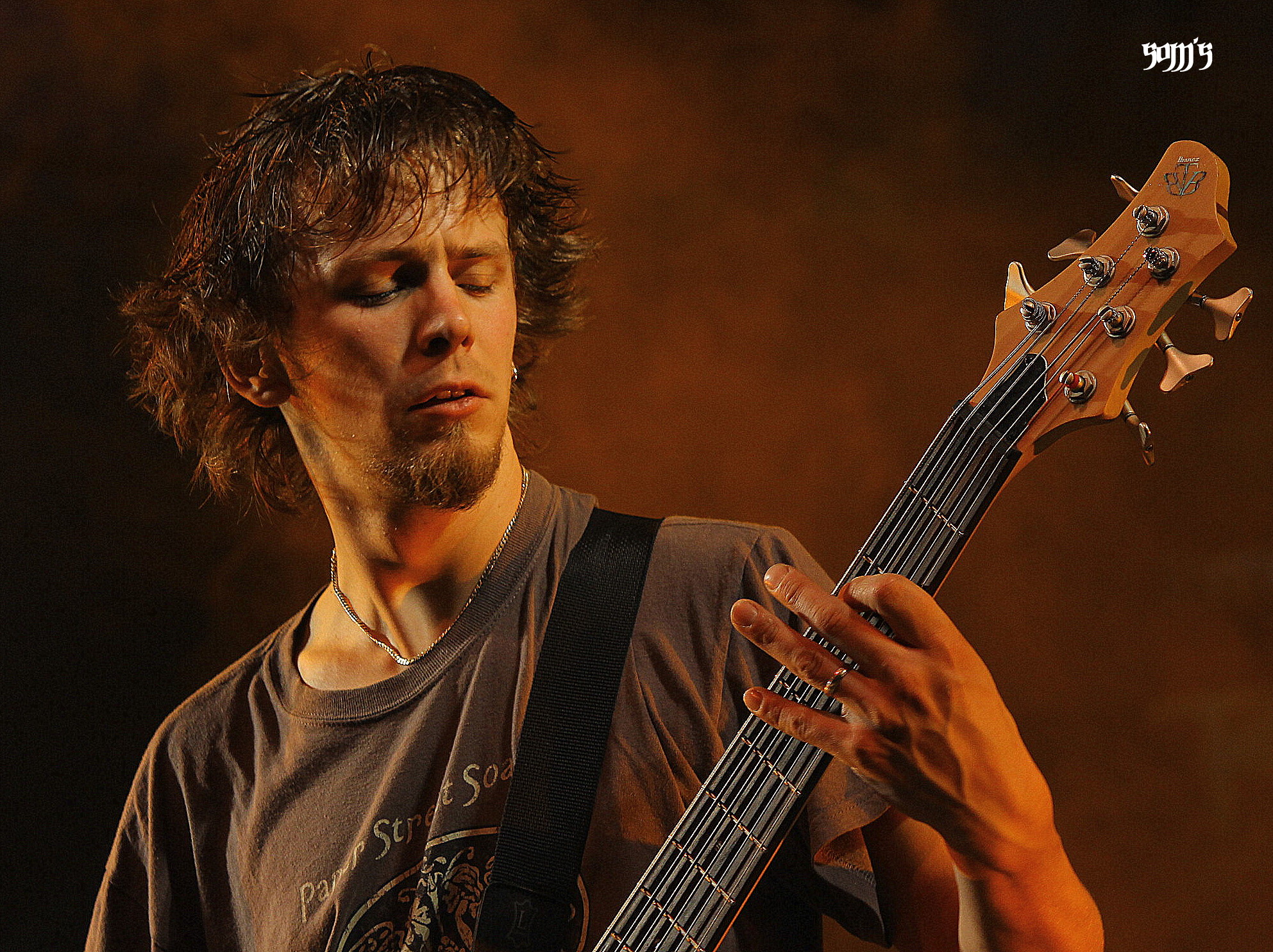 “We are Vildhjarta from the World of Warcraft”, announced frontman Vilhelm Bladin as they took the stage. ‘Ben Blast’ was the first track they played and the crowd broke into a roar of howls. One could see that the band was influenced by Meshuggah and that the typical djent-styled riffing and the dual vocals were somewhat new to some people in the crowd. Metal noobs were unable to understand the riffing patterns and many were seen head banging off-time – something that, I must admit, was quite hilarious to witness. It was a treat to see the 7-piece band being an incredibly tight live act, though. The crowd roared its approval as the band played ‘Shadow’ – the first track on the Masstaden album – with a slow, ambient intro pounding into heavy djent riffing. The dual vocals, with Daniel doing the screams and Vilhelm doing the deep growls, were a definite highlight. The next song ‘Dagger‘, which is the first off the Masstaden album to have an official video, was welcomed with metal fists and roars from the hardcore Vildhjarta fans standing up against the railing. The song comprises of alternate clean ambient parts and complex riffing; ‘Eternal Golden Monk’ came next, starting out with complex grooves and good use of the three guitarists in the band. ‘Deceit’, an instrumental track off their 2009 EP Omnislash that was infused with vocals and added to Masstaden, was filled with slow grooves and saw some intense head banging from the crowd. ‘Traces’, starting out with fast riffing, was the next song. It saw a circle pit instantly and was followed by ‘Phobon Nika’, a short 3-minute track that has quite a long clean intro and heavy breakdown riffs in the end. 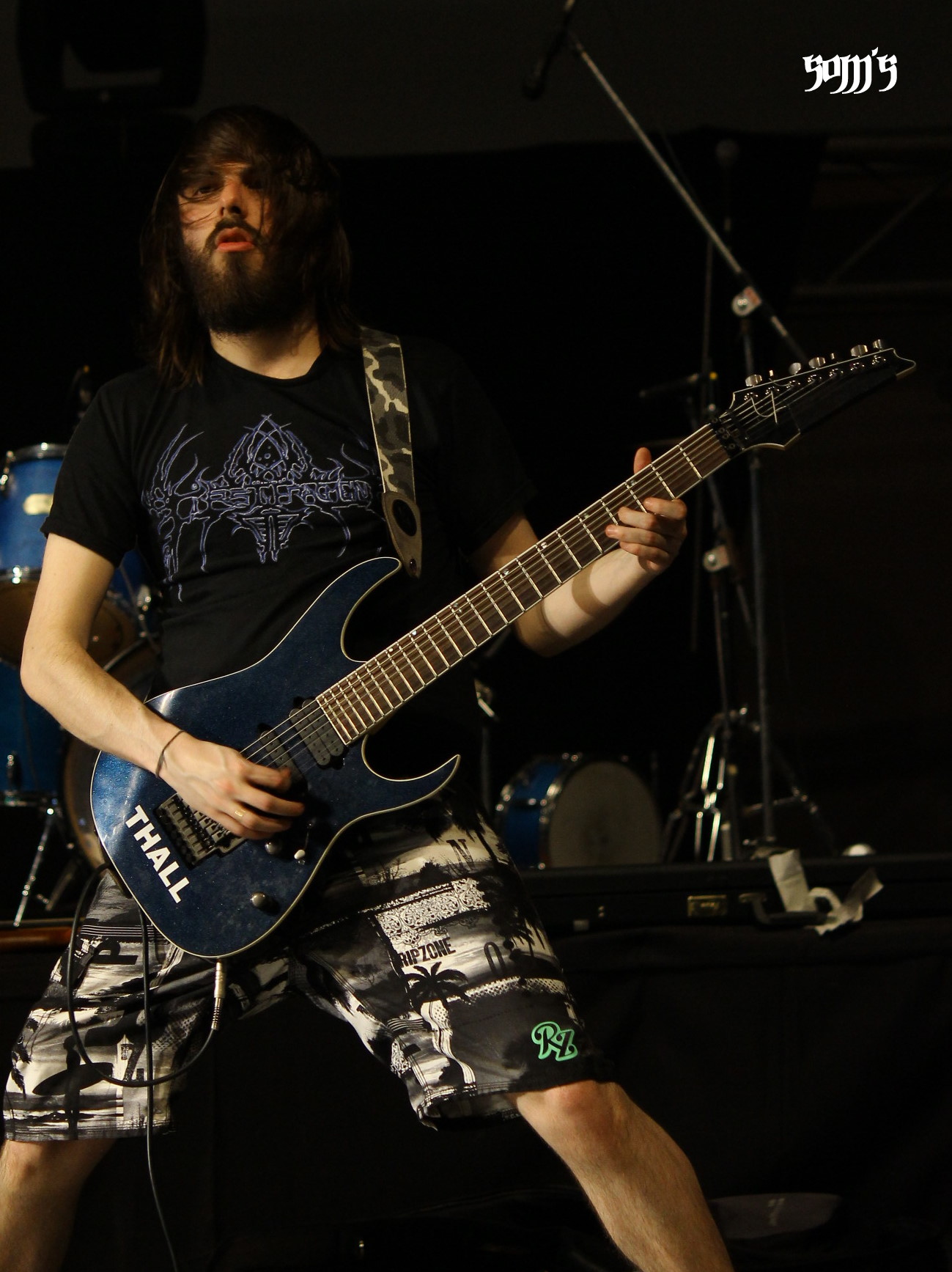 The three guitarists, two keeping rhythm and one playing lead, had perfect timing with their breakdowns and all of them seemed to have amazing guitar tones as well. The drummer, who seemed to have been playing along with a click track, was flawless and held the band together quite comfortably.

During a quick word with the vocalist Daniel Adel, he said that the band’s album Masstaden is based on the concept of globalization and its good and bad put together in the form of a fable; he added that his personal inspiration as a vocalist comes from Jens Kidman (Meshuggah) and Eric Kalsbeek (ex-Textures).

‘All these feelings’ was the last in their set; again, filled with slow grooves quickly switching to fast double bass drumming, it was a perfect ending to the set. The crowd thoroughly enjoyed the tight and intense performance and headbanged right till the end of the set, with the band performing ‘Dagger’ as the encore.

Sound issues were the only let down of the evening, affecting some bands more than the rest. This isn’t unusual and it’s quite evident that these things are sometimes unavoidable. At the end of the day, the OAT resounded with the sound of Metal and many people who weren’t as into the genre, went back home with the strong urge to give it a more serious listen.