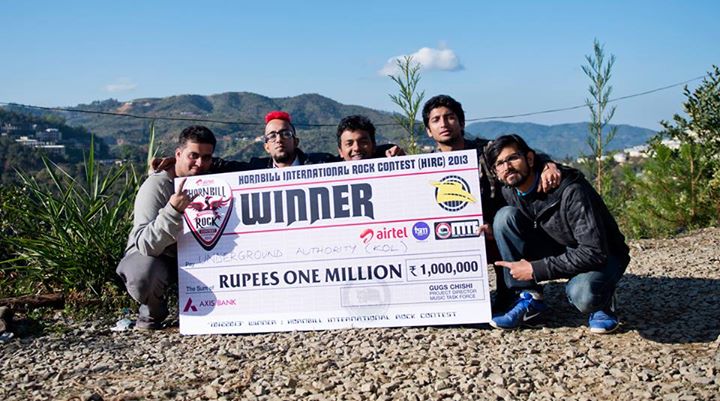 WTS spoke to Underground Authority recently about winning the coveted 1 Million Rupees cash prize this year, at the Hornbill International Rock Contest much to the amazement and exhilaration of fans across the country. Here’s what they had to say about the experience and what’s in store next…

WTS: Tell us all about the Hornbill International Rock Contest experience.

UA: It was not easy for us to step into a competition after 3 years. We were pretty nervous, as a lot was at stake. We have made a bit of a name for ourselves already – given that, the other bands were really good and we were also cheering for them. It was definitely not an easy win considering only quality bands went for the competition.

WTS: At which point did you sense victory or did it come as a surprise?

UA: When the crowd went crazy and took out their cell phones during our song ‘Microphone‘. We kind of had the feeling that victory was coming our way!

WTS: What talks went on in the green room just before you went up on stage? How determined were you to win?

UA: We were absolutely determined to win! We prayed and blessed the band members and did our trademark shout “Destroy” with all members in a huddle putting our hands together!

WTS: Underground Authority is an established band. What was the reason behind your decision to enter this competition – was it the huge cash prize?

UA: The cash prize,yes. We suffered a huge financial setback recently because of the health of our vocalist and we needed a cash boost. But most importantly it was to prove that we are not sellouts as some people believe. It was to prove that rock music is not about the language (we sing in Hindi) and it reaches out to people if it has quality.

WTS: In your opinion, what is the relevance of such competitions especially when musical prowess/quality cannot really be measured?

UA: It’s true that musical ability cannot be measured but this competition is a great platform for bands. All the sponsors and judges come from reputed musical backgrounds and institutions. It’s good exposure. All the bands have a great sound set up, a good chance to interact with the biggies in the business.It was more of a festival than a competition!

WTS: What plans with the gargantuan prize money you guys have won?

UA: Album promotion and distribution is priority.That’s what we needed the money for. No extravagance hopefully! We just want to push our album the furthest that we can.

WTS: How was the crowd at the festival?

UA: The crowd was amazing! They love good music above everything else. Most of the crowd comprised of musicians so that was a double treat for us!

WTS: There was an uproar when the results were announced that the Hornbill Rock Competition was rigged this year. Your comments on that?

UA: There was no uproar at the venue,in all of Nagaland – people only came up to us to congratulate us and take pictures with us. As for Kolkata, every single person from the crowd was happy that we won. All the bands came and congratulated us. Most people predicted that we would win. The only resentment that was seen was by anonymous profiles on social media which is quite a common occurrence and is insignificant. But to be fair, everyone has an opinion and is entitled to it. If someone is not happy about our victory, we’re sure they will get over it.

WTS: What next? What are your plans in terms of tours and studio recordings?

UA: A massive tour is on the cards.Our album YOU.AUTHORITY is ready and will be released soon.We will play all over the country and beyond hopefully and promote our album.