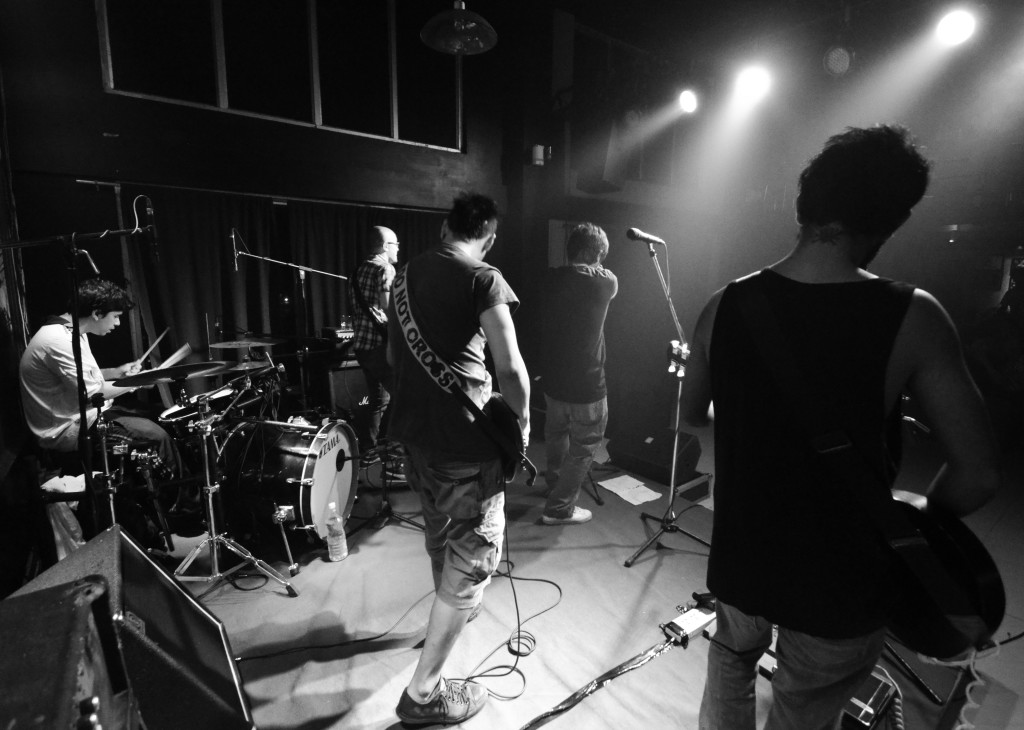 Gingerfeet is a funk alternative band from Kolkata who played their debut gig at the Hornbill National Rock Competition in December 2012 and went on to win it! Less than a year and a few singles later, GingerFeet released their debut album High & Above: the First Wave on September 27 at Someplace Else in Kolkata (Read our review of the album here.) We had a chat with the band members about their music and their latest album. Read on!

WTS: How did Gingerfeet originate?

Abhishek Gurung: We have been friends for a long time, just that we were part of different bands having a different niche. It was sometime in Fall 2012, when we decided on forming a band adhering to a genre that we craved for ever since we started playing. We met in Gangtok, and then had a jam in our rehearsal studio in Kolkata and there was no shizz and jazz anymore, we decided to go for the kill.The thought process of the band suffused very well among all the members, the genre that we wanted to put ourselves in clicked and Gingerfeet was formed as an all original act.

WTS: Tell us what transpired after your win at the Hornbill Festival until the release of your debut album.

Lokes Mangar: We took it one thing at a time, we always had the plan of releasing an album, but it’s true that the win at Hornbill definitely boosted the release date prior to the time it was actually planned. We developed a super-strong fan base after the win and they demanded for a release which would let them have access to our music. So we stepped on the gas pedal to get things out on time. We released a couple of singles first and then finally released the album.

WTS: Tell us a bit about your experience at The Hornbill Festival and other major events you played at.

Dibya Raj Mukhia: Oh it was fantastic! The experience at the Hornbill Festival was out of the world as we played in front of 25,000 screaming fans singing/jumping along with our tunes. It’s an experience,bands dream of and we were completely overwhelmed to have won the Hornbill Rock Contest on the first go – many bands dream to achieve this platform for years.We had a great time overall,we would definitely pen it down as one of the best experiences ever. We had around 5 originals that time and the win urged us to write more.

In March , we were shortlisted for Hard Rock Rising in which we emerged as all India winners and represented India in the global scene. In June , we headlined Rock For Change , Darjeeling organized by Artists of Darjeeling. In August , we played at Harley Rock Riders Season IV in Kolkata. By this time we almost had the set list for the album ready. In September , we did a pre-release album tour in the north-east, headlined Auxesis – Assam’s biggest college festival and pub gigs in Cafe Hendrix and Upstairs Lounge. The tour was a huge success, playing at jam packed venues is awesome fun especially when you are playing ONLY original songs.All in all, the pre-release feeling was great. We had encores at every gig and it always feels good to hear the audience shouting out for another one of our own songs rather than a cover. When it comes to production and management,a special mention goes to our artist manager RockStar Events Artist Management for getting everything in place in the best possible way.

WTS: Tell us more about your songwriting process.

Vedanta: The songwriting process of Gingerfeet is not at all complicated. We distribute our parts equally. Dibya and I come up with guitar riffs and melody lines while Lokes and Abhinandan work on the groove structures. Abhishek and Abhinandan work on the lyrics and composition of all the songs. After the material is ready we jam and see how it’s working out and then we hit the studio for the scratch recording.

WTS: Tell us about the origin and composition of your new album.

Abhinandan: Nowadays it is very difficult for a band to survive and seldom do people buy albums and support artists. So releasing an all-original album was indeed a challenge and it would be interesting to see how people react to it. We do have really high hopes on this and we are sure that we’ll get a good response. We had a lot of fun making it so I guess it would be fun to listen as well.

High and Above comprises of the first set of nine originals we wrote since we formed the band,the songs will make you feel good.There are no dark elements in our songwriting and lyrics despite the fact that majority of our songs are on the heavier side with a dose of funk,probably that’s the most fun part. Through High and Above, all our listeners will get a vivid taste of what comes to us naturally when we do music. The nine songs, each telling a story add up to a bigger story. Our listeners can easily relate to every song from this album, we have carefully sorted out the tracks so that every listener can enjoy this thrill ride with a smile on his/her face.

WTS: What kind of themes do you usually explore lyrically?

Dibya Raj: Majority of our songs have elements of irony,satire and positivity fused with metaphors.Our drummer, Abhinandan stresses majorly on metaphorical/metaphysical references in his lyrics while Abhishek enjoys writing subtle, animated lyrics which spark out well when co-related. Lyrically we have tried to portray the positive side to all ordeals of day to day life in this album. All the songs lead to a positive note keeping the challenge open.

WTS: Individually, are there some songs you consider more significant than the others?

Abhinandan: We have our share of favourites, nonetheless we love the whole album. All of us have different choices – Abhishek and Rhitabrata’s (Album Producer) favourite track is ‘Am I dreaming or what?‘, Lokes likes ‘Mr. Boombastic‘, Vedant and Dibya like the title track ‘High and Above‘ and ‘No Division‘. My favourites are ‘The Vibe‘ and ‘Fake You’.

Vedanta: Great fun. Someplace Else played host to us, we had a full house, most of our CDs were purchased by tourists from Sweden,UK and USA who were present at the gig that night.

WTS: What is Gingerfeet upto next?

Abhinandan: We’ll let that be a surprise!