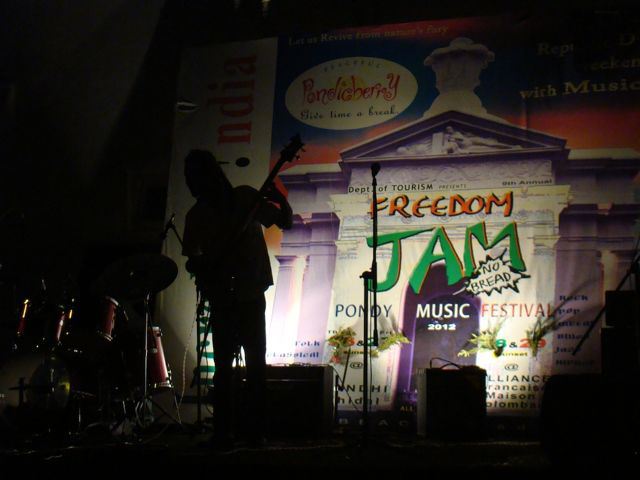 Music for the sake of music. If this seemed to be the motto of the annually held Freedom Jam, its intention was lost to the growing needs of a city which desired to please everything else but to favour music.

“The Freedom Jam, is a non-stop pulsating musical explosion reverberating by over 40 bands of various hues vying to play over multiple stages to commemorate the freedom of music, now a Mecca for the rock and contemporary music scene in India. The annual Freedom Jam, free music festival is Bangalore’s own Woodstock. With thousands of music lovers and over a hundred musicians from all over gathering to perform at the annual jam celebrating freedom at midnight with music on the eve of the Indian Independence day the festival has now become one of Bangalore’s most awaited events.” (mybangalore.com – 2010)

If those were the words highlighting what Freedom Jam was about, it is unfortunate to say that our ‘Woodstock’ isn’t being held with as much pomp and show and vigour as it used to.

Freedom jam originated in the mid-90s, when a lot of foreign bands started touring India and the TV music channels started hogging the limelight. Indian bands found it difficult to find venues to perform. As an act of survival, performing musicians got together to create situations where they could play. The 50th anniversary celebrations of the nation spurred an initiative by a few musicians and Freedom jam was born in August ’96.

I set to trace down what led to the dimming down of the event, or why there isn’t as much talk about it, like there used to be in the past.

I spoke to Siddhartha Patnaik, member of the band BAJA, arguably the first band of desi rockers, who played mostly their own songs and rock versions of Indian standards like ‘Vande Mataram‘, ‘Surangani’, Bhojpuri folk ditties etc. They started Gigs Live Action, which officially initiated Freedom Jam and the monthly Sunday Jams.

“People these days don’t want to visit a rock show that has bands playing original compositions. They’d much rather watch a band that plays covers and then walk away to overpriced beers in expensive pubs than listen to bands that have something to offer,” he says.

Owing to diminished response and crowd to Freedom Jam, which was once touted as India’s Woodstock, he said it was due to the failing sponsorship of the event among other factors.

“The brand that used to sponsor our show finds it more lucrative to sponsor a Bollywood related event than a rock show which draws a lesser crowd. Even the bands that once used to perform on our stage find that playing for corporate gigs is more favourable to them. For that matter, it’s hard to produce an album or stage a show without having to appease a particular company or venue,” he says.

Having gained perspective from one of the organizers, I managed to speak to his co-organizer Gopal Navale, of Guruskool, regarding Freedom Jam. Here’s a peek into the conversation that ensued.

Sharath: You’ve come a long way from performing with Esperanto in 1996 to having your instruments seized by the cops in your farm during the Freedom Jam of 2004. What does Freedom Jam mean to you?

Gopal: To create and perform original music without any overt commercial bias.

Sharath: What could you attribute Freedom Jam’s dying popularity with Musicians in Bangalore?

Gopal: I do not really know as after having a rather long stint at nurturing the movement from 1996 to 2008, I have taken a sabbatical to pursue my own music and career and have not been part of the team organising the recent Jams. The torch is being carried by co- conspirator Siddartha Patnaik. I can hazard a few guesses. Ever since the 2008 recession, sponsorship has been hard to come by, and the wannabe rockers do miss the great sound and great venues we could provide earlier. When Guruskool was organising the Jams, there was a concentrated attempt to enlarge the audience . We had monthly newsletters, posters, extensive press coverage, net publicity through online communities and our own websites all of which snowballed into making the Freedom Jam and its monthly avatar, the Sunday Jam, the most awaited dates in a music junkie’s calendar. Now with no sponsorship, rather than selling its soul, the Jam is now back to basics and reinventing itself, but the flame is still burning.

Sharath: What do you think needs to be done to bring back the spirit of Free music?

Gopal: Catalyze an audience. What is the point of cooking up some great music if there’s no one clamouring to lap it up? Where would John Paul & Co. be without those screaming teenage girls who discovered the magical effect their music had?

Sharath: What does the future hold for Freedom Jam?

Gopal: The contours of the mindscape of man are in a flux, the digital world has taken up a lot of the free time available to non indispensable pursuits. So perhaps the Freedom Jams of the future may need to take place somewhere in cyberspace.

It’s depressing to think that the free concert which saw musicians eager to fund costs by their own hard work, won’t happen with as much intensity as it did before. When the men behind the scenes in organizing the event have lost faith in the new breed of musicians who prefer being enslaved by the greedy needs of a capitalistic society.

Summing up, I’d place the times of Freedom Jam belonging to the era where free music, like free speech still held its place amongst a democracy. In the days of Anna Hazare stopping still to move the Government to paying heed to the cry of disgruntled people, the new generation needs to realize that there was a movement, and still can be one, to recognize musicians with passion and not bowing down to the demands of commercial bodies.