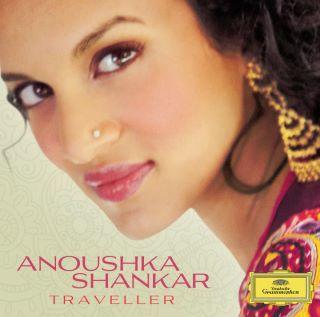 Sitarist-composer Anoushka Shankar’s 2012 global tour for her latest album Traveller touched down in Bangalore on January 22. The album has been released on the Deutsche Grammophon label and the India concerts were organised by Indian Stage; details of other tours are on her official website.

Traveller brings together the soulful soaring music of Spanish flamenco with the unique texture and rhythms of Indian classical music. The album and concert series re-interpret the thousand-year-old link between Spanish and Indian music, originally kicked off by gypsy migration from northwest India to Europe, Africa, and west Asia. The pieces span a wide range of texture, rhythm, melody, and mood.

Anoushka Shankar began as an Indian classical music sitarist, and then branched out into fusion and international collaboration. She is the only artist to be trained solely by her father, internationally renowned Pandit Ravi Shankar (she looks a lot like him as well!)

Anoushka has been deeply rooted in Indian classical music from the age of nine. She was the first Indian musician to perform at the Grammy Awards in 2006 when she was nominated for the album Rise, soon after becoming the youngest-ever nominee and the first woman nominated in the World Music category, for her album Live at Carnegie Hall in 2002.

Born in London, and raised between New Delhi and California as well, Anoushka’s career has been international from the start, embracing Indian and Western classical music, followed by jazz and other forms. She collaborated with Indian-American musician-composer Karsh Kale in the album Breathing Under Water, which included guest appearances by her half-sister Norah Jones, Sting, and others.

She has performed along with her father and teacher Ravi Shankar, and also explored experimental, electronica and pop. She now resides in London with her husband, director Joe Wright and their son Zubin. Her albums over the past fifteen years include Breathing Under Water, Healing the Divide, Rise, Anourag, Anoushka and Live at Carnegie Hall.

The latest album Traveller has been produced by the noted Spanish musician, songwriter, and producer Javier Limón. Anoushka has described this album as a cross-cultural journey as well as a record of her getting married and having a baby (as reflected by tracks like ‘Inside Me’ and ‘Lola’s Lullaby’). The CD is a terrific mix of India and Andalusia, and is original, mesmerising and inspiring.

Reviewers have already hailed it for being “a joyful and serene exploration,” “diverse and innovative,” a fitting testimony to Anoushka’s “compositional and improvisational skills.” Her work as a talented composer has been described as “the perpetual exploration of the fertile ground between Indian music and a variety of genres.” The combination of “passionate flamenco notes with soul stirring Indian instrumental” adds up to a deeply satisfying musical journey.

The performance in Bangalore was not entirely fusion; there were quite a few Indian classical music pieces, and the Spanish musicians took turns accompanying her on the other tracks.

Anoushka introduced the musicians at the performance and briefly described the pieces; some more details would have been greatly appreciated, and it would have been nice to hear the Spanish musicians speak as well.

The 14-song performance was spread over two sets. The opening piece was Indian classical, followed by flamenco. Sandra Carrasco’s soaring vocals stood out, as well as the superb interplay between sitar riffs and high-energy cajon. The next fusion piece beautifully blended palmas along with cajon and mridangam, followed by a swaying shaking rumba.

Percussionist Pirashanna Thevarajah showed his prowess on mridangam, moorsing and konnakol in the next piece. The closing piece of the first set was based on Raga Kirwani, and the second set opened with ‘Lola’s Lullaby‘.

The next piece was in granaina flamenco style blended with Raga Khamaj. “It took quite a bit of work to put this piece together,” Anoushka explained; it featured everything from soulful shehnai and sitar-voice jugalbandi (call-and-response) to a terrific tabla and mridangam crescendo.

This was followed by a tender love song. “I am very shy when it comes to singing about love, so I had the lyrics translated into Spanish,” Anoushka joked. Pirashanna Thevarajah switched to ghatam for this track.

Sandra Carrasco showcased her sizzling vocals again on the next track; it would have been terrific to have a flamenco dancer accompanying this piece. Melon Jimenez on guitar and Pirashanna Thevarajah on ghatam ended the song with a superb crescendo.

As the concert moved to its final phases, Melon Jimenez showed off his explosive guitar playing on the next piece, with the last track being the title track from Traveller. All the musicians took solos on this piece (based on Raga Jog), and Anoushka displayed some unusual sitar plucking and even strumming techniques.

The performance drew a standing ovation, and many in the audience wished they could follow the musicians on the rest of their India tour to Kolkata and Guwahati, and beyond!