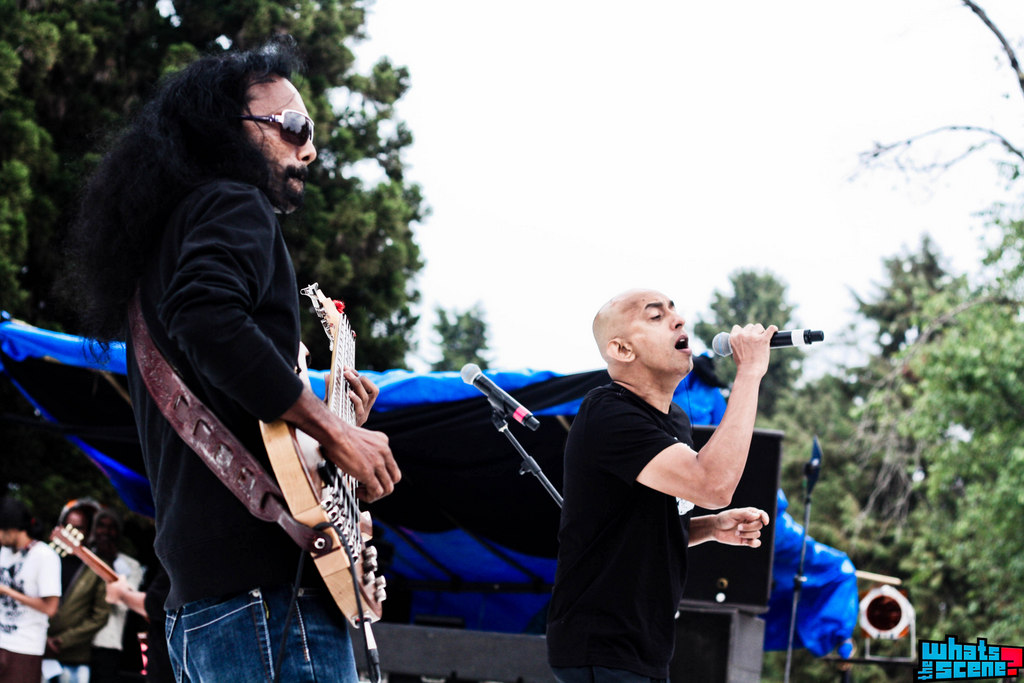 There is no dearth of good rock/metal Indian bands today. Some of them enjoy a good amount of popularity, at least in their home ground. Some others are more niche and play for a more loyal fan base.

What does seem lacking in the Indian music scene today is the number of bands that don’t perform in English. Bands that stick to their traditional, vernacular languages while staying true to the genres they wish to adopt. One may argue that switching to a vernacular language may spell less popularity or even death knell for a band but there are monumental, towering proofs for the fact that this isn’t true. For instance, Avial and Agam are two bands that have chosen to sing in Indian languages. They seem to have a rather large fan base and are two of the most liked Indian rock bands. Avial confirms the importance of vernacular singing with zeal – “We don’t have a problem with English but we always wanted to make music in Malayalam. We never thought of starting out as an English band.”

It may be a challenge to win over thousands of people with your music if they can’t understand what you sing but it also emphatically projects a certain honesty and reverence for your roots. It’s not always about being “patriotic” and “traditional”. This is also asserted by Avial in their statement: “We are musicians just making our music and not trying to establish or propagate anything. We are here to make music and entertain, but in the process if people are identifying our music with their culture or roots, then we are really glad.”

Sometimes, it’s about accepting that as an Indian musician, you’re shaped differently. The different fields of experiences you’ve had as a struggling Indian musician, as a pursuer of a career and consequent fame in a country with the cultural and perspective diversities of India makes you a person unlike any other. Of course everyone else in other parts of the world also has their own stamp of uniqueness and individuality but we’re not talking about them. We’re talking about India and music.

There has been a lot of debate about whether music should be made with a purpose. There have been no conclusive answers and hopefully there will never be any. However, music has been known to elicit emotional responses and bring about a sense of oneness among people who participate in listening to music together. Music has been called a language unto itself. Music has been known to tell stories and convey thoughts and perspectives to the world that were formerly not as known or as popular. I’m sure many of you might have heard someone or the other say “I want to let people know this happens, through my music.” Had he been a music fanatic, Marshall McLuhan would even go so far as to say “Music is the message.” (He wasn’t; I am, so I’ll dare to commit the heresy).

Music has been known to carry through stories, legends and remnants of the past and has been known to express what culture has to offer, throughout history. The question is – are there enough bands in India that are doing this with their music? Do they carry forward a little bit of their lives and the collective emotions of the people of this country? Do they bear the insignia of their distinction? The point of this doesn’t lie in consciously picking out cultural aspects of the country and embedding them in music because it /has/ to be done or because it will make you “different”.

As people who are of a different place in time than that of the originators of western music – our approach to the same music is different. We have stories that are unique to us. For a musician, this singularity is amplified by the very virtue of the fact that s/he is a musician. Artistic expression is often the product of the experiences of the artist. Every art movement that exists is testimony to this fact. The same can be said of rock/metal music in India. There is a definite influence of the West but the people who make the music are not western.

So why does language matter so much? Probably because it’s the primary form of expression in a song. There are words in Indian languages that have no English counterparts. There are varying degrees of intensity associated with the same word in an Indian language and in English. To substantiate with a relatable fact: this is probably the reason why people will switch to ‘gaalis’ instead of ‘insults’ when they’re really, really mad! People usually think and dream in their vernacular languages (assuming that that’s the language they’re most comfortable with). When a strong part of one’s identity as an artist is used in expressing emotions, the result of such integration is obviously much stronger. Language indisputably remains to be an authoritative conveyer of such honesty.

However, it isn’t just about the language. There are other factors like riffs with an Indian touch and the confluence of Indian classical music styles with the Western that complete the genetic makeup of an India-based band. Language just remains to be the most visible, most predominant and obvious component of a song unless you’re specifically predisposed towards an instrument. To quote Avial, “We wouldn’t have reached where we are now if (we) wrote and sang in English. And music, like all art forms comes out best when it’s true to itself. When you think you have achieved that, your music will be well received irrespective of the language and lyrics. And we don’t think so many people would have even heard of us if we were just another English Rock Band.”

Using elements like a vernacular language and/or classical Indian music with metal or rock isn’t (and shouldn’t be) a matter of obligation or a want to be “different” from one’s counterparts. It’s a realization of the fact that the difference may exist – and if it does exist, anything that refuses to acknowledge that difference may not be as complete as the product that is a result of this acceptance.