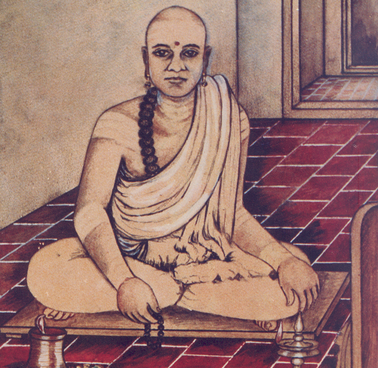 After wading through tonnes of musical material from the Western world, ranging from 50s hard bop jazz to the instrumental rock of Joe Satriani, acid poets like Hendrix and Dylan to political ones like Frank Zappa, I hit a wall and turned around and looked back at the music that used to play in my house when I was a child. It was sung by a woman with the voice of Goddess Saraswati herself  M S Subbulakshmi. One song from the whole tape of the Carnegie Hall concert hit me, made me stand up and take notice. The song was Sri Mahaganapathi Ravatumam by Muthuswami Deekshitar. I started on a quest that still has endless destinations in time and space to cover.

Before continuing with the monologue on my favorite composer of all time, let me introduce you to my perception of music. Good music in my opinion must, involve hard work in creating/composing, teaching, learning, rendering and listening, stir one’s limitless imagination and create an intellectual challenge in understanding the underlying expression of the composer. I will be basing my analysis and introspection of Deekshitar’s music on these points.

Deekshitar was born into a Tamil Iyer family in Tiruvarur, Tamil Nadu in 1775. The place is full of lush green farmlands, beautiful riverfronts and majestic Temples of the Chola period. Deekshitar learnt the Vedas and every other sacred document in the Hindu scriptures, was a multi-linguist and learnt astrology and sciences in the Brahmin traditions. He traveled far and wide visiting shrines from Badrinath down to Rameshwaram. His instrument of choice was the Veena. With his brother Baluswami, Deekshitar experimented with western violin and pioneered its inclusion into Carnatic music. He left his mortal coil on Deepavali day in 1835 as he requested his students to sing the kriti – Meenakshi Memudham Dehi (raaga Purvikalyani, Adi tala).

Deekshitar kritis are set in meditative moods. The pace of a Deekshitar song is slow and easy in a setting pretty similar to a slow 12-bar blues song like Stormy Monday (T-Bone Walker). There’s inner peace in the Sanskrit lyrics. Deekshitar wrote songs in praise of the God/Goddess and cites every other good book of Hindu philosophy. There’s a lot of inclusiveness and the concept of advaita rings aloud, showing the secular aspect of his music, in contrast to popular belief that Carnatic music is Hindu devotional music.

Beyond devotion and beneath the lyrics

Basic tendency of any listener is to get carried away by what is being said in the lyrics. This causes one to overlook the underlying musical scenery, which can take breathtaking forms based on one’s perception and imagination. In Deekshitars case one has to look beyond the lyrics, though to decode and understand just the lyrics is a life’s work!

As Deekshitar’s songs have an inner peace and emotional stability of sorts, unlike say Tyagaraja whose kritis evoke the right emotion in lyric and the raga they are set in. It is vital to segregate the music from the lyrics and analyze it as a separate entity. The compositions reflect on emotions and atmospheres that certainly go beyond just devotion and have a diverse effect on the listener based on his/her day.

The first thing that struck me after I had started listening to his music in its purest form (without the lyrics) was the different time frames it evoked. While the Gurjari raga kriti Gunijanadi Nuta took me ages back to Maurya-time Pataliputra, the Suratti raga masterpiece Shri Venkata Girisham was pretty apt in today’s attitude-laden I am what I am world. While the same Suratti manifested in Balasubramanyam Bhajeham took me to Deekshitar-time Chola land with a ‘boat on the Cauvery’ feel. While some kritis sounded really good while reading Asimov’s space-age fiction (Cintaye Mahalinga Murtim in Paraju, Hari Hara Putram in Vasantha), Bala Gopala in Bhairavi gives you a sneak peek into a day in the life of Yashoda, with alternating tension (because Krishna’s up to some mischief) and sweet relief (owing to the sweet smile of the naughty kid caught stealing butter.)

Most of the compositions are set in cycles of 3 or multiples of 3 like 6/9/12. It so follows that most of the music we tap our feet to, be it swing jazz or a blues shuffle or a waltz or even kuttu paatu, is set in 3x/8 time (swing is 4/4 triplet feel, blues shuffle is 12/8, waltz is 3/4 and kuttu paatu is 6/8). Deekshitar was ahead of his time in composing songs that were inherently foot tapping.

But there are examples where complexity in music, taala and lyric were all infused to present a great intellectual challenge to the singer and listener alike. Sri Kamalaambikaya Param in Bhairavi is a masterpiece in sahitya (lyric), raaga, bhava (feel), taala and laya (inherent rhythms). These songs were specifically made with geeks (like me) in mind!

The greatest aspect of his compositions is the use of double-time lyric to end a stanza. Placed much like blues turnarounds the Madhyamakaala (double time) sahitya are the real killer phrases of any kriti. As much of the song would have had heavily swung, floating, flying, sliding phrases with a lot of emphasis on gamakas, the madhyamakaala is brisk, flat notes that go up and down the raga at a frantic pace and cover the most beautiful aspects of a particular raaga. Deekshitar also built the phrases preceding a madhyamakaala so gracefully that even a person who hasn’t listened to a particular kriti would easily guess the right place of the madhyamakaala, again strikingly similar in character to a blues turnaround!

The composition gradually builds slowly on itself, each phrase technically and emotionally connected to its preceding and succeeding phrases, like tributaries that join a big river. The kriti builds up to the end by picking pace, like the river approaching a waterfall and lets gravity loose at the madhyamakaala.

Deekshitar also used simple plain notes like ma/pa to convey a lot of emotion and yet maintain the feel of the raaga, which is audacious way to think for any Carnatic composer, given that many raagas have these notes in common. For example, charanams of Jambupathe, Sri Kalahastisa (Huseni), Nilotpala Nayike (Nariritigowla), Sri Nathadi Guruguho (Malavagowla), Cintayamakanda (Bhairavi), Sri Subramanyo (Thodi).

Such was the extent of imagination, creativity, musical genius and utter craziness of the man, that he created kritis that had lines containing 3 languages  Tamil, Sanskrit and Telugu. Sri Abhayamba (Sri raga), Venkatachalapathe (Karnataka Kapi) are prime examples of the manipravala kritis. He also composed raagamalikas – wherein the raagas keep changing after each line of lyric. What sets up interesting possibilities in jazz-fusion today was explored in detail some 200 years back by the great man. His father Ramaswami Deekshitar also experimented with great success in the ragamalika genre of composing and passed on his wisdom to his great son.

Resurrecting the past for the future

Deekshitar also resurrected great raagas of the past and set kritis that were futuristic. Deekshitar kritis in old-school Bhairavi, Old-school todi, ghanta, ahiri, takka, padi, gurjari, the gowlais  narayana, chaya and purva, saamantha etc. are still the final say in these raagas in terms of handling. And these raagas seem to be timeless in the kritis of Deekshitar, paving the way for science fiction Carnatic music.

Finally Deekshitar was famed for his attention to detail in his kritis. He meticulously explains aspects of the temple in his lyrics (Ranganayakam in Nayaki, Shankachakra in Purnachandrika, Sri Matrubhutam in Kannada, Pahi Mama Ratnachala in Mukhari, Anandanatanaprakasham in Kedaram, etc.) and stories related to the temples from the Puranas. Sangeetha Kalanidhi Smt. R. Vedavalli once explained in a lecture demonstration that if he had had buses in his time, Deekshitar would have mentioned the bus routes to the temple in his kritis. Such was the obsessiveness he possessed in preserving the ancient traditions.

Special kriti mentions and their feels

Deekshitar plays with fluid mechanics all along the song. The lines build up in different patterns like a fountain and end by hitting a zenith and flowing back to the ground. Or maybe like waves that make crazy patterns only to hit the shore and go back. The striking aspect is that the song is composed on Lord Shiva who is in the form of the element Appu or water at the temple!

The song is also one of the most somber of Deekshitar kritis with an inherent feel of sadness of losing someone dear and introspecting the good times spent with that person.

The magnetic pull of the Ri (minor second) of the gowla is brilliantly put to use by Deekshitar as phrases go up and above only to be brought down to the Ri, like puppets on a string. And yet in the anupallavi Deekshitar climbs up to the upper echelons in no time and then flies briskly into a majestic madhyamakaala and jatiswaras (swaras mixed with jatis or vocal rhythms). The charanam shines like gold and the takeoff for prakasha karo is prepared beautifully and meticulously. The ending madhyamakaala is a lesson for all those jazz-fusion aficionados to get hooked on as a winding conclusion pattern is drawn on top of a complex mishra ekam taala (cycle of 7 beats).

Ni Saati Deivamendu- Sri Ranjani  composed on Thyagarajaswamy of Thiruvarur temple, the only song that doesn’t feature the mudra – Guruguha is entirely set in Telugu. It is a dance-song intended for Bharatanatyam performance. But musically it is a gem. Deekshitar accuses, coos and kisses the Lord with different prayogas of the same note  Ni (dominant 7th). In this song Deekshitar sings in Naayika-bhava or the female-context. Watch out for the swara passage at the end for some very amusing phrasing.

Sri Muthuswami Deekshitar is the single-most important composer in the history of this great country and his songs represent what we as Indians stand for – secularism, inclusiveness, intellect and imagination. The aim of the article wasn’t to give an exhaustive trivia of Deekshitar’s life and his compositions, but to enlighten people who are yet to jump into the ocean of Carnatic music. This article is to embrace the newcomers and introduce them to the one composer who will enthrall and excite them like never before.

Alt-J to return to Delhi this May