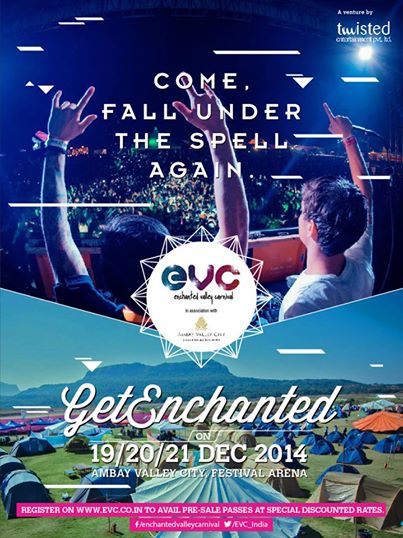 The dates for the much-awaited Enchanted Valley Carnival are out! This year, the festival is scheduled for 19th, 20th and 21st of December 2014.

EVC is a 3-day music festival held at Aamby Valley City. A first of its kind music festival which took place on an air-strip with 60+ artists performing, EVC 2013 paid ode to music and various artists in the world of cutting edge electronic dance and world music with genres like House, Techno, Trance, D&B (Drum and Bass), Pop, Fusion, Folk, Rock, Dubstep, Experimental music. The festival witnessed a crowd of over 25,000 at the Festival across 3 days with a sold out Campsite of over 1000 people every day at Aamby Valley City, India.

The 4 stages showcased some of the most extra-ordinary DJs/Producers and Live acts. The event brought together some of the most electrifying international performers, and covered the vast spectrum of dance music with the presence of Indian talent on the line-up.

Where’s all the new music going?