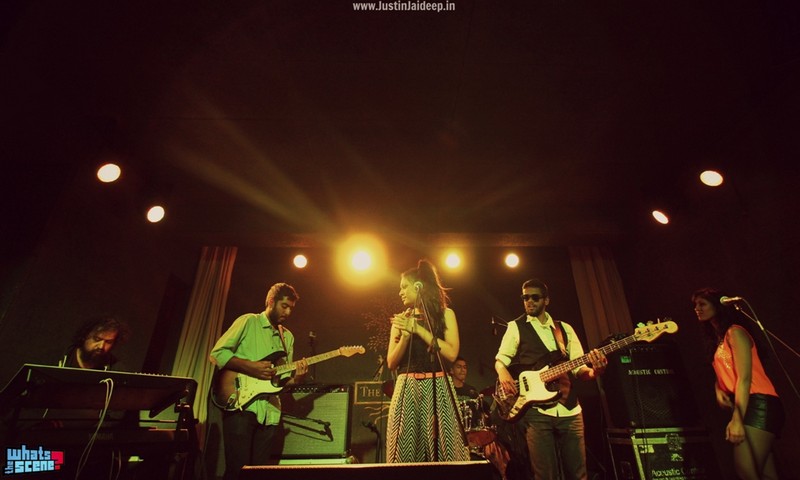 The folks at BFlat organized a fantastic evening with the extremely talented Alexis on 27th September. I will be honest, I wasnt the most excited. I love rock and RNB never particularly fascinated me except for a couple of tracks, but enter Alexis DSouza with her powerful voice and my misgivings were silenced.

Alexis selling point is their subtlety. Even their most powerful tracks ooze simplicity. Their biggest strengths are the leading ladys vocals and their hard hitting lyrics. For the most part, in my head I was screaming Oh My God! Her voice! My only complaint is that they had more covers than originals. They did however try to ensure that they added some of their own elements to a couple of covers. I must tell you about the bands camaraderie on stage. It honestly looked like they were just jamming on stage. No big deal.

The evening began with their original Back to the Start. A definitive bass line courtesy of Kaushik Kumar, a subtle solo and the band looking like they were drunk on music – if that doesnt set the tone for the rest of the gig, I dont know what does! No Matter Where You Are had beautiful guitar riffs, quite John Mayer-y if you will. Also, Srijayanth Sridhar (Keys and Synth) was caught singing along while losing himself completely to the music. Deepa Jacobs (Backing Vocals) and DSouzas voices meshed together so perfectly in this one. My favourite song of theirs has to be Hurt too Much, which was the perfect blend of minimal instruments and a very catchy melody line. Alexis also debuted a new single at the gig, You Wouldnt Like Me. Ramanan Chandramoulis (Lead Guitar) brilliant guitar solo, the girls powerful vocals (Im saying that a lot, arent I?) made this one, one of their best tracks yet. Forgive Me was another track in which DSouza, the lyricist shined. Unfortunately she went off key in a couple of places but Burn saw the vocalist take command. The vocals were the star of the show and the instruments added to them.

Their best cover was Talking Heads ‘Psycho Killer. They made it their song. Talking Heads fans, dont hate me for saying this but I loved their cover more than the original. Seriously, give their cover a listen. Kumars bass and Deepak Raghus drums stole the limelight! Jacob took the lead for their cover of Mayer Hawthorne‘s No Strings Attached and pulled off the single effortlessly. Their cover of Love will tear us apart by Joy Division is another track where their love for subtlety simply shines. Their cover was so uncluttered in comparison to the original. However in Corinne Bailey Rays ‘Closer and Justin Timberlakes ‘Pusher Lover Girl, the vocals slipped off pitch at a couple of places.

They wrapped the gig up with Make love to me, an original. They even got the audience to sing along and before we knew it, the gig came to its close. Alexis made sure that along with the audience, they had fun too. The fun included an impromptu performance of Happy Birthday for a member of the audience. The band looked a little cramped on stage but nonetheless they made it a great Saturday night for everyone who showed up.