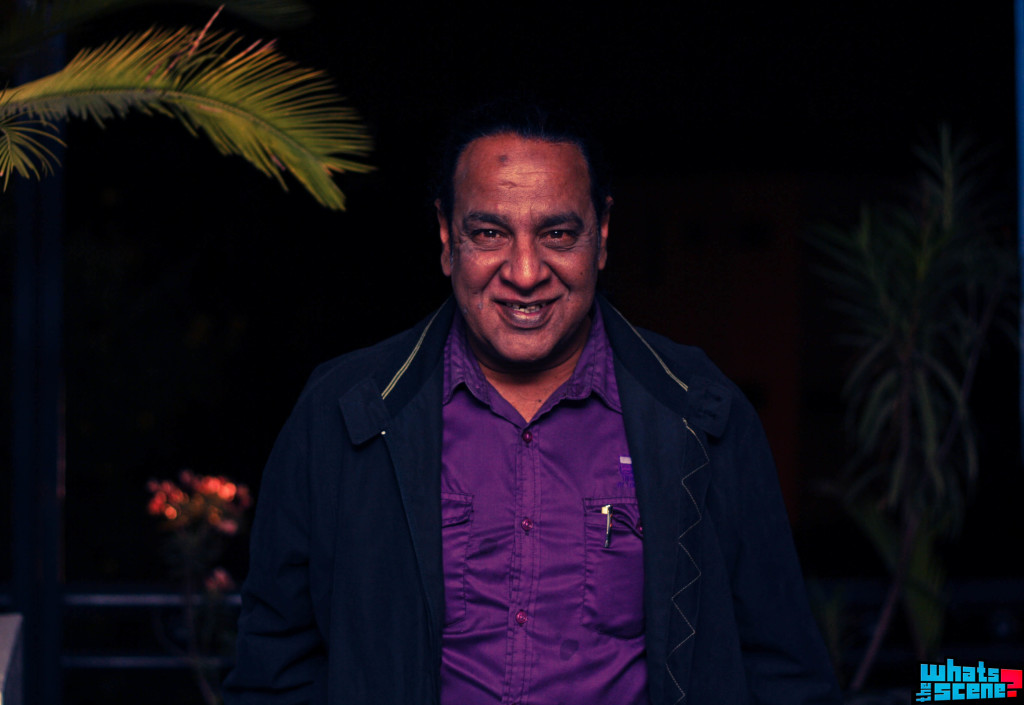 Bangalore Bistro is located on the roof of the towers that are adjacent to Eva Mall in Brigade Road – a nondescript restaurant that has seen live artistes play tunes to customers that reminds them of the years gone by. Prof. Srinivas, a well-known musician since the 70s, was dressed in a black blazer and a red tie, with hair swept back into a pony tail, he cheerfully welcomed a crowd that consisted mostly of musicians of the yesteryears. I was told there’d be close to forty artistes who’d perform for Srinivas’ 60th Birthday. Forty seemed a staggering number, and I wondered how he’d pull of an event with all of them performing. He ushered me in and introduced me to Hari and Ravi, the Saxophonists who entertained Bangalore through the 80s and 90s.

A 60 year old man, with no signs of aging, stuck to what age compels – to start on time and keep all pretence behind. Hari took duties with the saxophone and led the crowd to a melodious instrumental number. Unwilling to sit back and be part of the crowd, Srinivas soon took hold of the guitar and started playing. Jazz seemed to be the flavour of the evening, with the saxophonists taking centrestage. Srinivas was gracious enough to introduce me to a few of his friends who were musicians too. I noticed Peter Isaac, from The Chronic Blues Circus. Clinton, he said was the keyboardist who was part of Srinivas’ band called Cloud Nine. An unassuming man with glasses, he played along with Srinivas as the evening crept on. Mr. Defen and Mr. Babu were the other guests who entered while Srinivas held the crowd’s attention.

Just when Jazz seemed to stick around, Mahesh turned the evening around with an old Hindi number he used to sing in an era when bands used to play in bars which satiated not only customers’ thirst for alcohol, but their musical tastes too. He soon followed it up with a Tamil number. Srinivas then introduced me to Kenneth D’Souza, famous for being a well-known Serenador at Hotel Atria. Kenneth spoke to me about how the crowd (all above 50), were musicians of the 70s and 80s and that Srinivas’ birthday was instrumental in getting everybody together and performing. I learnt much about Srinivas being active in calming tempers that arose due to the egos that crept amongst musicians. Srinivas has kept to his nature as being a very social and amicable person through the years that have passed. Kenneth and Srinivas were part of a band called the Lost Caballeros. Kenneth spoke about how the police clamping down on live bands was nothing new, and that it could be traced way back to the 80s. The times then were different, he added, however they still played because their passion for music lived, and got past drugs and alcohol and all vices that came with it.

Srinivas got back on stage to play a Rolling Stones number, with Kenneth who supported him with backing vocals. A red-shirted man called Mr. Fabian played leads. Sabina Price entered to lend a female voice to the night. As it slowly began to drizzle, the cake was cut and delicious dinner served. As the music in the place got livelier, I had to recede to the dying light and the rain with memories of a wonderful gig to remember.