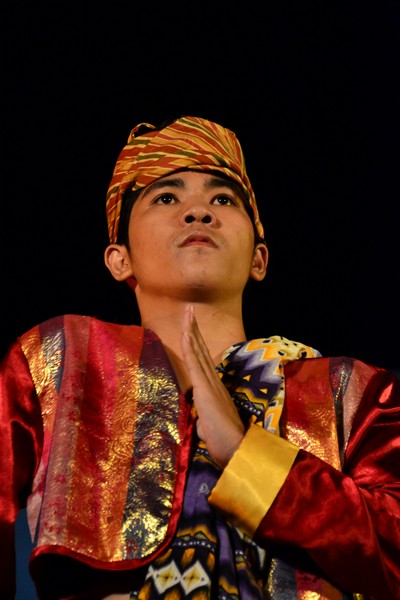 I love Sundays in Bangalore. They are reminders of a far away time, when this city was not on steroids and people really were “laid back”. The Bengaluru International Arts Festival (BIAF) was on, and I could choose between a hip-hop group from the USA, a Max Turner “program” or an evening of folk dance performances from Sri Lanka, Karnataka, Philippines and Orissa. The latter seemed the most interesting to me, and I jumped at the opportunity to cover it. This would also give me the chance to see Freedom Park that has been in the news lately and to witness different art forms from a variety of cultures.

Freedom Park is situated in the Central Business district of Bangalore. This used to be a jail before, and is now converted into a memorial park. The park exhibits some vestiges from the old penitentiary days. Some of the barracks and prison cells have been preserved for posterity. The rest of the space comprises lawns, fountains, art works and an amphitheatre.

I arrived just as the opening speech was being made by Mr. Nagaraj Murthy, the co-founder of BIAF. This was followed by an address by Dr. Suma Sudhindra, the founder of BIAF. Their passion for promoting arts and culture was both honest and inspiring. Dr. Tilak Fernandes from Sri Lanka was the chief guest, and was duly felicitated with the traditional garland and shawl. The full capacity audience was abuzz with anticipation.

First on stage was the janapada troupe, Lingaiah and Group, from Karnataka. This famous group has regaled audiences around the world, in exotic locations including Moscow, Beijing and Las Vegas. This was an all-male troupe comprising of singers, musicians and dancers, all dressed in colourful traditional dhotis and kurtas. The accompanying musicians played an upbeat set of two songs, which were mostly centered on rustic tales. The instruments they used were rather simple (two kanjiras and two pairs of manjiras) and sufficient to take one back to an evening in the farmlands of Karnataka, perhaps on the day of a festival. 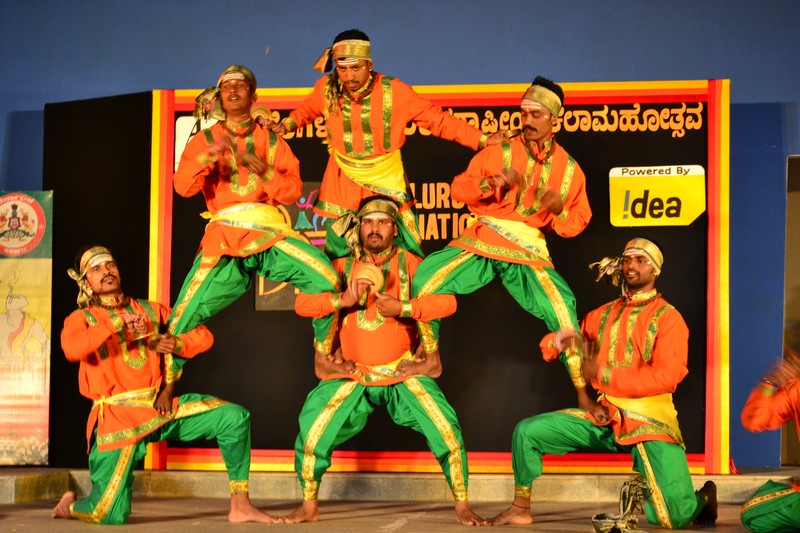 The dancers were an athletic bunch, who looked rather serious about business and went through their routine of muscle wrenching stunts without as much as a grimace. The carefully choreographed tumbling and delicately planned clambering atop each other were all done whilst playing the manjira to perfect time! The dance was well co-ordinated, so that the pyramid formation fit properly into place in the end.

Next on stage was the folk troupe from Philippines with their war dance. They first presented a ritual war dance with shields and lances as props. The men bristled with their war cries while the women managed to intimidate just with the use of their eyes. This item was the first completely unfamiliar experience of the evening to me, so my curiosity and wonder rendered all that intimidation futile! The men moved with sweeping, athletic gestures and the women were sedate and subtle. 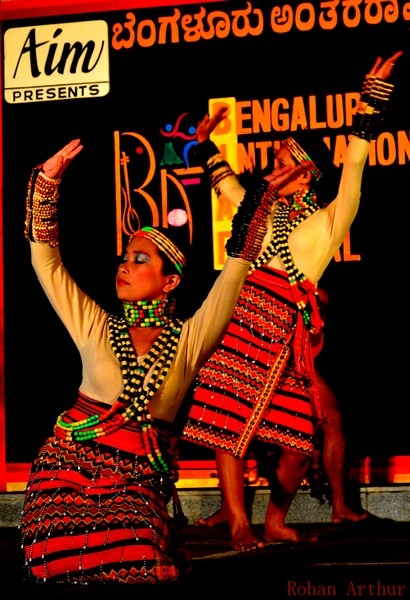 It was now the turn for the much anticipated troupe from Orissa with their ‘Pung Cholom and Dhol Cholom’, led by Sushant Kumar Singh. This was also a war dance, from Orissa, but was a complete mood shift from the previous one. Rather than a war dance, the performance looked like a joyous hunting party, out to wake the dead with their clamorous beating of the Manipuri drums. Everyone looked so happy to be there, so perhaps by “war dance” they actually meant the after-party post a thumping victory over the neighboring province.

After the two war dances, I was left wondering whether the Orissa party would’ve won the war because of sheer numbers and the noise they made or the troupe from Philippines for their show of aggression. There was hardly enough time for day-dreaming because next up was the all-female folk dance troupe from Sri Lanka. The ladies were dressed in bright blue attires with elaborate peacock head-dresses. This was to be a Mayura Vannama (traditional peacock dance), which is performed mostly during the monsoon season. The dance was set to very oriental-sounding recorded music, and was quite a treat to watch. 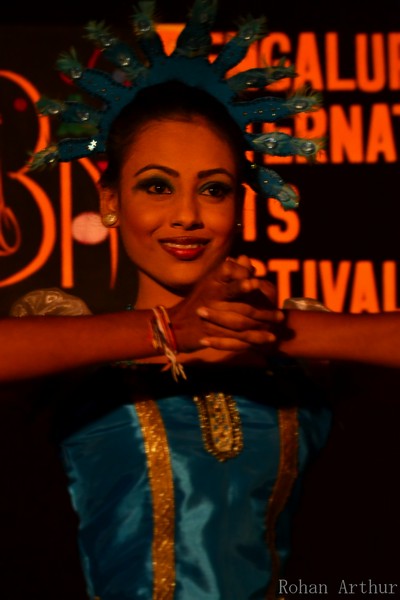 Next up was Puja Kunitha, something that I had only heard of but had never seen. This was one form of the Puja Kunitha, where the dancers balanced icons of the goddess Shakthi and performed seemingly impossible acrobatics while keeping their sacred burden in place. The two men who performed this dance were as if in a trance, limbs flailing wildly and concentration writ deep on their faces. There were a couple of moments when the audience was caught in a collective gasp because of the risky maneuvers performed with the icons’ position seemingly endangered. It was a great show, and was met with roaring applause from the excited audience. 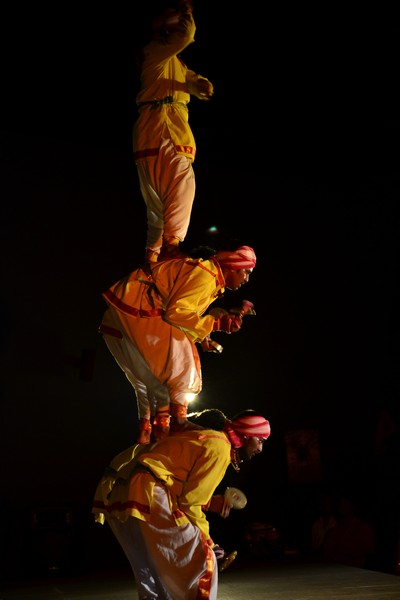 Lingaiah and his group were back on stage next, this time in yellow kurtas. The performance was called Kamsale Kunitha. To my untrained eye, this dance looked like a repetition of the first item, but only with different costumes and set to a different song. A short introduction before each performance would have served us well to understand the significance of each act that came up on stage.

Next, Sushant Kumar Singh’s group from Orissa was on again, this time for an item called Baja Salan. This time around the troupe put up an even more cheery performance than the previous time. The stage looked like a party. All the dancers had genuine smiles on their faces. They seemed to be having so much fun that I had to fight an impulse to jump onto the stage and join them (Bollywood style). The performance was taken from one of the dances that are performed in Orissa during the harvest festival: the happy relieved people, partying after a stressful, tiring harvest. 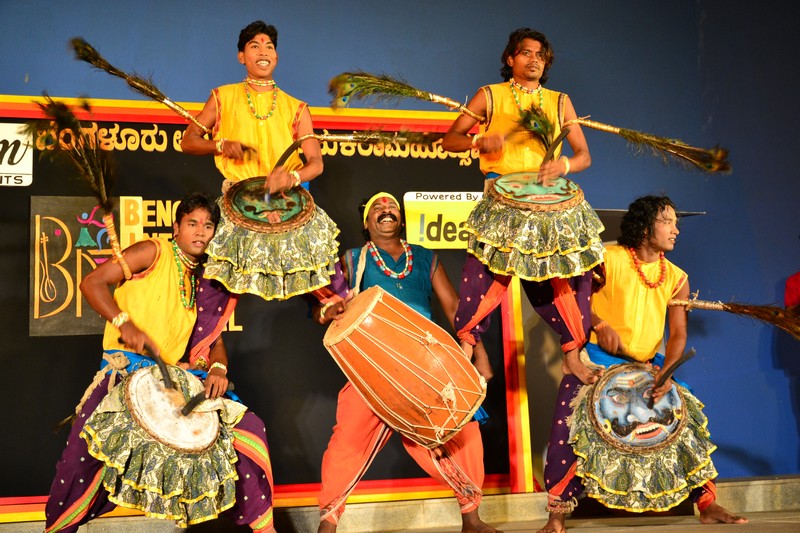 Towards the end of this dance, surprisingly, the male dancers formed a pyramid formation, which looked exactly similar to the one made by Lingaiah’s Dollu Kunitha group. I was left wondering whether these formations were originally part of the folk dances, or have seeped in now, because they have been admitted to “urban” performing arts, with largely unaware urban audiences. In any case, it was an impressive display of choreography.

The ladies from Sri Lanka were back on stage for the Nekarada Nrutya a folk dance performed by ladies while making mats. This dance form had a few similarities to Kerala’s Thiruvathirakali. The dance was set to a lilting love song which seemed to be crying in happy longing for the beloved. The ladies, dressed in white this time performed the slow dance and caused quite a few flutters among the male audience with their beautiful make-up and graceful hand gestures. 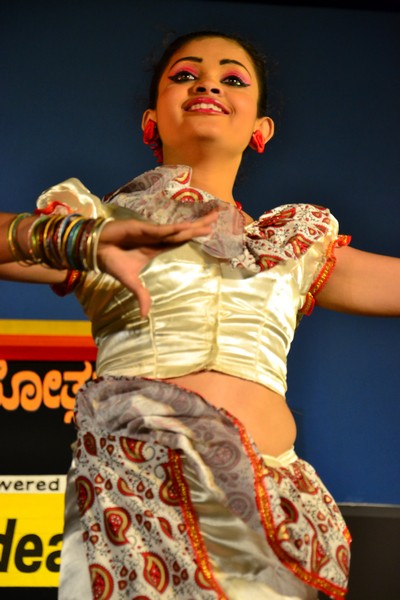 Philippines was on again, and this time with a dance called ‘Hare Raya’. This dance is performed by the Muslim community in the Philippines. It is a unique and fascinating dance form, in which the prop is a long shawl. Again, this seemed to be a solemn affair, and the dancers each did their part in perfect synchronization and with glassy facial expressions. The second half of the dance was with bamboo poles as props. The lovely lady dancer balanced gracefully on two bamboo poles which were supported on the shoulders of two of her partners. 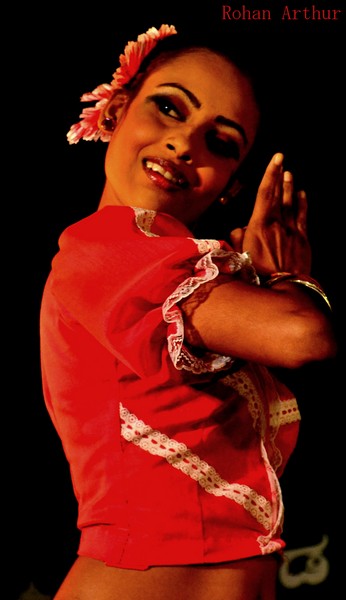 The Sri Lankan troupe was on stage next, with a dance called Bangal Balalu, or “bangles from Benga”. The ladies were attired in rustic pink dresses. For some reason, this performance reminded me of summer holidays during my childhood. Perhaps this was because of the happy carefree atmosphere created by the performance. The props, of course, were bangles since the dance was about bangles from Bengal. This was a more vigorous and sprightly dance and it sure made me forget my worries for a while.

The last performance for the evening was from the group from Philippines. Their previous two performances were sedate, solemn affairs so it was slightly stupefying to see the same dancers now all running onto the stage, clearly in a mood to party. The men were shirtless, and had polished coconut shells tied to different parts of their bodies. They also had pieces of these coconut shells in their hands and they struck these shells to the ones on their bodies to keep time with the happy Spanish Bailar tune. This dance is called the Maglalatik, and is a mock war dance, performed light heartedly today to commemorate a war between the Moros and Christians during Spanish rule. 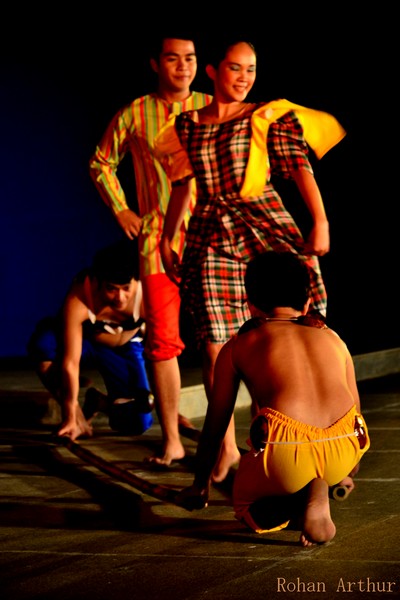 They were soon joined by the ladies and the same two bamboo poles from earlier. Even the bamboo poles seemed to have transformed into sanguinity, as they were used as props as the ladies flitted gracefully from between them. This dance is called the Tinikling, and is considered the national dance form of the Philippines.

This performance brought us to the end of a fascinating program that consisted of very different dance forms from Karnataka, Orissa, Sri Lanka and even far away Philippines. I was smiling to myself thinking of the water cooler conversation I would have in office the next day when I would wait for my colleagues to finish describing their inane multiplex outings, and then dazzle them with an account of this evening.

Rohan Arthur is a Photographer + Writer at What's the Scene who enjoys all music that does not involve growling/vomiting into the microphone. Rohan is the vocalist of a blues rock band and also manages another folk rock band. At every given chance, he runs away to the jungles, which he believes are his home.