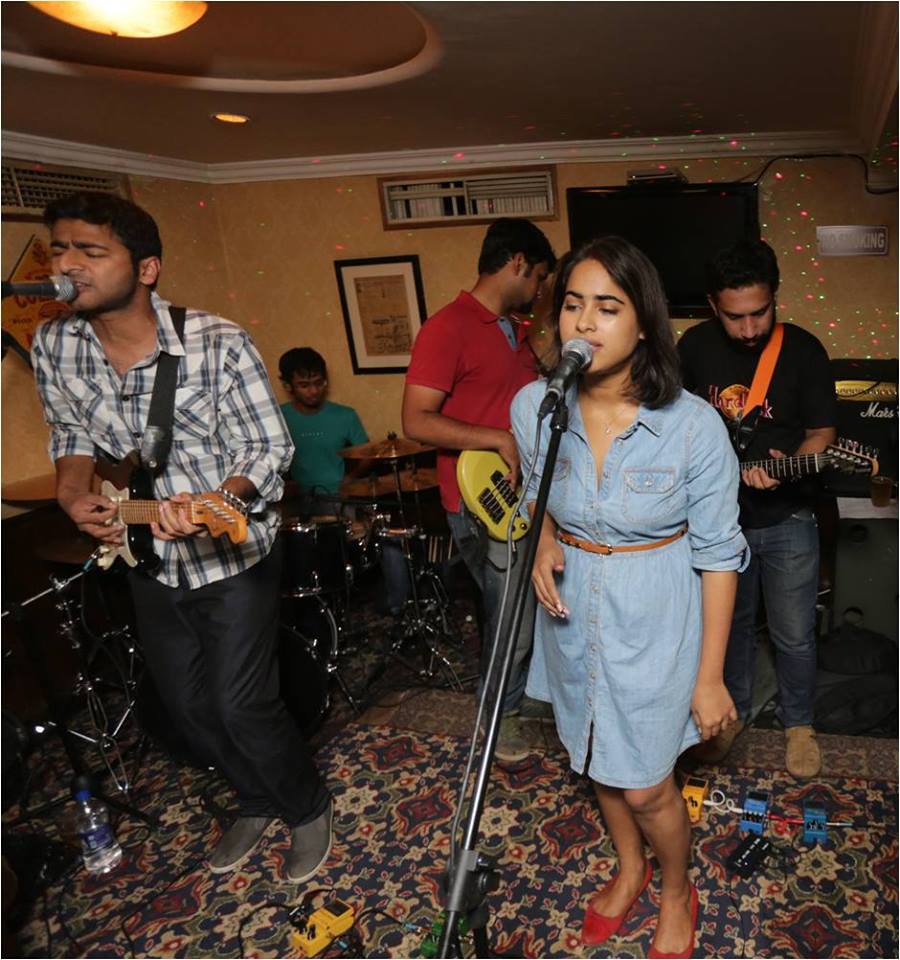 Blues Before Sunrise is a five member blues,  blues rock, classic rock band comprising of Sammy J David (guitar and vocals), Sheela Sequeira (vocals), Srish Chander (guitar), Anand Mahadevan (bass) and Claude Loren (drums). Last Sunday, the band treated the crowd to a fantastic hour and a half of good ol’ blues and classic blues rock covers. Having been in existence for nearly three years now, the band pulled off a really handsome gig in a really cramped up stage in a corner of the floor at the pub.

When I entered the dimly lit interiors of the aforementioned venue, ‘Highway 61′ by Johnny Winter was already playing on the screen. As I took a seat beside the pictures of Frank Zappa, Hendrix and Cobain, the first thing I noticed was the small little stage where a five member band would somehow accommodate their equipment and bend or rather ‘quarter bend’ their way through the gig later in the night. they had a retro mike in the middle of the stage giving the 60s club feel and one would expect a couple of formally dressed musicians complete with suit vests and bow-ties with worn out acoustic guitars sing their “Cramped-up Blues”.

Along came Sammy, cigarette in mouth, and started off with a solo acoustic cover of the SRV classic, ‘Pride and Joy’ setting the mood just right with some good 12 bar blues in E. Anand and Sam then played ‘Daughters’ with Anand on vocals and Sam taking leads. Just to mention, it was pretty obvious that these guys knew their blues sticking to the basic minor pentatonic and glass slide solo. The first song with the whole lineup was a cover of ‘Have you ever seen the rain’, another classic rock number by CCR, complete with some nice harmonica work by Srish. The rest of the setlist comprised of a mix of classic numbers with a little bit of modern blues covers thrown here and there and the best feature of the carefully assorted set list was that it was “all rise” till the end.

The numbers that followed were ‘Bell Bottom Blues’, ‘Give me one Reason’, ‘Bottle of red wine’, ‘Redhouse’, ‘Third stone from the sun’, ‘Willy and the Handjive’, ‘Rocking all over the world’ and finally ‘Joker and the Thief’.

What was good about the band was that they were right on cue. They lost some time due to some technical trouble and compensated for it by not taking a break. Sheela’s singing was a fresh change from the usual male blues vocals and she was at ease with the mike, grooving along with the music and interacting with the crowd. Sam was great on the solos playing within the pentatonic scales, the slowhand as well as the finger tapping, had his string bending in control and the flawless use of the wah-wah pedal needs a special mention. After all, what one looks forward to most in a blues performance are some nice lead solos and the licks in place. Srish was a good rhythm support handling all the familiar riffs beautifully. Claude’s drumming and Anand’s bass work supplied the band with all the energy.

The band did justice to all the songs without much variation in their covers except for a change of key in some for convenience. The crowd enjoyed the gig, and so did I. Blues before Sunrise makes for a good listen for those looking for “easy on the ears” classic numbers as well as the heavy riffs and Rock n’ Roll and I hope they come up with more original compositions soon.