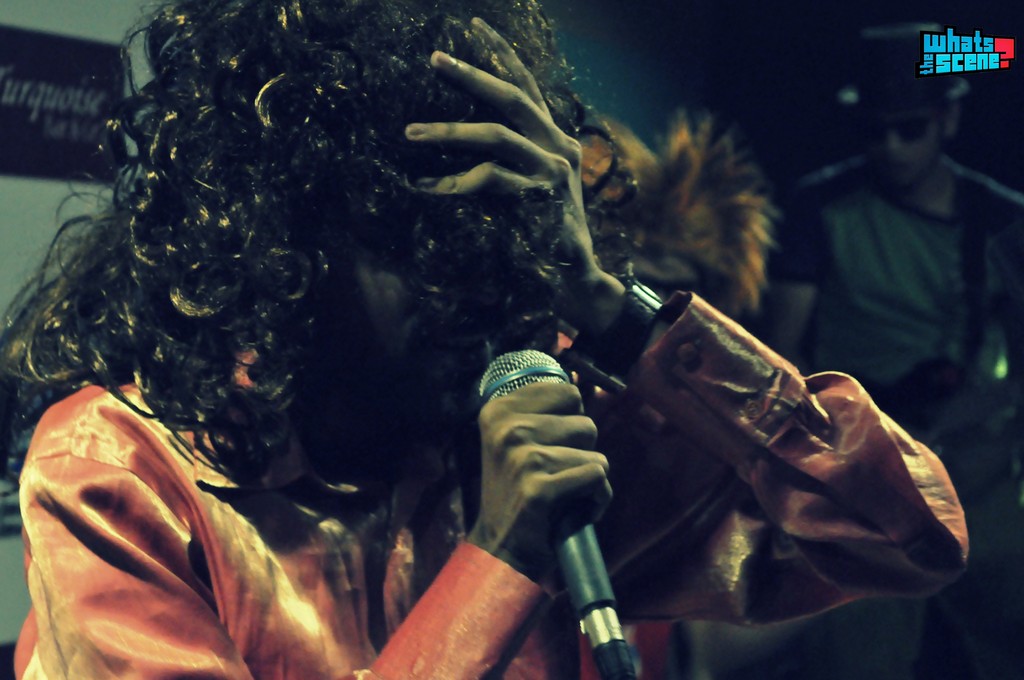 There is a lot of rock and heavy metal music being played in and out of town, but that is mostly directed towards the hardcore followers of those genres. Live Banned on the other hand, as spoken of by the founders, was formed with the sole purpose of entertaining the masses who are not really restricted with the choice of genres. Expectedly so, the band at its recent gig at The BFlat Bar (23rd December 2011) brought rock closer to the crowd in its most palatable form. They mashed up popular tunes from regional cinema with famous metal riffs, funk overtures, disco influences, and a carefree attitude. And by the time the performance ended, they had encore requests coming from a packed house!

I arrived at the venue at 8:30 p.m. when the sound check was still on. Having never seen the band members sans their outlandish attire, I didn’t quite recognize them at first. But soon, they emerged in a new avatar – the men in regular attire transformed into exhibitionists of a ridiculous sense of dressing for some, and the performers of an entertaining repertoire for many.

The BFlat bar is known to be a venue that hosts a lot of gigs, such a venue not having a PA system of its own to support a gig that just reaches about 3000 watts in sound output, was a surprise for me, if not a shocker. I don’t intend to register any discomfort with this – the hired sound guy and the equipment left us with nothing to complain about.

Live Banned has Amrit on vocals, Dhruv on the lead guitar, Sid on the keys and occasional rhythm guitar, Raveesh on the bass and Dheeru on the drums. The band members, especially Dhruv and Amrit were encouraging participation from the audience, and their enthusiasm was well received and reciprocated. Throughout the evening, there were funny one-liners, small jokes, and hilarious comments in addition to the songs that kept the listeners entertained and involved.

‘Ringamukka Kats’ was the first song for the evening. This mash-up starts with a prudently rehearsed guitar solo, and a carefully refrained but punchy intro that lasts close to three minutes. The pieces sounded familiar, but I am still not able to recall the exact names of the original sources if any. Thereafter, the song took a curious dive into the Tamil hit ‘Nakka Mukka’, the orchestration remained very alternative-rock, highlighted with borrowed riffs from Wolfmother’s ‘Joker and the Thief’. Then there was ‘Appudi Podu’ and what sounded like ‘Dhinka Chika’ thrown in, and this mix immediately got people into the mood.

‘German Rollhouse’ was the next one for the evening. It started with a punk influence, with the infamous Malayalam song ‘Silsila hai Silsila’, then quickly caught Rammstein’s ‘Du Hast’, carrying the same groove forward, without slipping into metal, as the temptation may be. The mix then displayed a slow balladry, almost like a lullaby, but the band quickly woke the listeners up with an abrupt transition to ‘Roadhouse Blues’, and the vocalist delivered the “Roll baby Roll” part with witty vibratos, finishing it with “Kaati Roll”, leaving me chuckling at the cheeky creativity.

The next song ‘Iku Chika’ was the band’s funky take on Ilayaraja’s ‘Unakkum Enakkum Anandham’ (the song which took on international limelight when it was allegedly lifted by The Black Eyed Peas). This mix was made complete with the funky chord-work at the start, followed by an ambient guitar solo, which transitioned to have metal characteristics, making it a little dark but still groovy. I totally savored this song, especially the vibrant alaaps that the vocalist put in, and the way it ended with the popular Mission Impossible tune.

Next was the rollercoaster ‘Girlie Boys’. This is a cleverly crafted mix of pop, hip-hop, and metal, with a Bollywood finale. Starting with funky guitar and drum work, supported by the keyboardist with a tone that may remind you of the 80s pop, the mix took-off with Kylie Minogue’s ‘Can’t get you out of my head’, and an ongoing riff from No Doubt’s ‘Hella Good’. Carrying the riff forward, the song transitioned to Black Eyed Peas’ ‘My Humps’. Then after a teaser from System of a Down’s ‘Chopsuey’, where “Father! Father!” got spoofed to “Appa! Appa!” the song landed on ‘Milk Shake’ by Kelis. Sailing on the sound set by the keyboards here, the song came back to ‘Chopsuey’, and the vocalist finished a baritone rendition of Luke 23:46 part right up to “angels deserve to die.” Then the groove hastily moved to Britney Spears’ ‘Baby one more time’ and Backstreet Boys’ ‘Everybody’. Quickly, the tune followed up with what sounded like ‘Est affectus, et defectus’ part from Enigma’s ‘Modern Crusaders’, and the song concluded with a power-chords version of Laxmikant-Pyarelal’s ‘Katey nahin kat-tey’

Next up was ‘Dope Mix’, which is a quick fix kind of a mix, featuring Dead or Alive’s ‘You spin me Round (Like a record)’, Don’s ‘Aaj ki Raat’, and Yves Larock’s ‘Rise Up’. It may have got a bit monotonous for me, except that I enjoyed the very ambient guitar solo.

‘Fast Food’ is first of the two originals that the band has composed. It started with the sound of the synth building up the mood, and a slow lead guitar, and an alaap. The lyrics were however funny but sarcastic. The song mocks the culture of putting up a fast as a form of protest. Soon after the entry into the song, I enjoyed the work on the keyboards which was partially reminiscent of the background score of Psycho. The time signatures that the drummer glazed this one with were enjoyable, and also the jazzy work on the bell of the crash ride. Since this is an original, I would have enjoyed more creativity on lead guitars, for the tones if nothing more. Amrit displayed his range on vocals, and when the song ended almost three octaves higher for the vocalist, the audience only realized after a few seconds that the song was over. More cheerful applause!

‘Europe ko Jai se Pyar Ho Gaya’ was up next. It started with the famous tune from Europe’s ‘Final Countdown’, and cleverly incorporated a piece from ‘Baazigar, O! Baazigar’. Then riding on a metallic orchestration, it incorporated one whole verse, the chorus, and the bridge from ‘Yeh Kaali Kaali Aankhein’. Thereafter, as if approaching of the finale of an opera, with great work at the synthesizer, and perfect guitar solo, the song drove through ‘Raja ko Rani se pyaar ho gaya’, and tapped a bit of Iron Maiden, and concluded with ‘Jai Ho’.

Next was a metal version of ‘Barbie Girl’, and I immediately liked the choice of tone for the keys and the dexterous work thereof. The drummer and the bass guitarist were at their best on this speedy track. The lead guitarist got a mouthful of singing to do on this one, so a minor glitch here and there may just be excused. But I would have really preferred the volume on the backing vocals to be a little milder.

‘If you come today’ as made famous by Dr. Rajkumar, got the Live Banned treatment. ‘Tick Tick Tick’ married Audioslave’s ‘Cochise’, improvised guitar solos, and absurd but hilarious singing.

‘Auto Tune’ is the second original by the band, and despite the lyrics being not very clear, I understood it to be a commentary on the ludicrous behavior by the auto-drivers. The orchestration was dark, keys and the guitars working in great harmony, and the drummer highlighted his supreme comfort with experimental time-signatures, and thunderous rolls.

The crowd demanded an encore, and the band obliged with ‘Ringamukka Kats’. This is where the house totally came down to dance, and almost everyone could be seen moving, swaying, head banging. To sum it all up, Amrit gave an impressively energetic performance with his vocal range, and also his on-stage persona, the outlandish attire, and funny dance moves. Dheeru, with his effected drum sounds, and occasional and clever use of double bass, gave a solid groove, decorated with strange timed sequences, and virtuous software support. Dhruv seems very comfortable with his guitar, even with those leads on what looked like reaching 18th/19th/20th fret. In my opinion, he could get more adventurous with the selection of tones, and those chord progressions which is for the band to determine anyhow when they improvise in their unique style. Raveesh with his bass line is the spine of the sound that the band creates. The measures where he was silent seemed like a lull that needed to end quickly. Sid has a captivating talent with the keyboards (I have always appreciated ambidextrous keyboardists), the tones were psychedelic and the effect, if I were to listen to the keys in isolation, may have just slipped me into a state of trance.

The chemistry between the band members gave the impression that the band has been practicing together for years, while they have not even been together for eight months. Live Banned is great to listen to and fun to watch, especially on a festive evening when you could care a little less about the diminishing boundaries of various genres. The band calls its genre “Awesome”, and that may just give you an insight of how confident this group is with what they are presenting. From my end, it is two thumbs up for them. On the path that they have chosen, they are sure to go far beyond most common sounds, and accomplish their mission of entertaining the common man.

The Bicycle Days feat. Audio-visual performance by Nikhil and Abhinav at The BFlat Bar, Bangalore