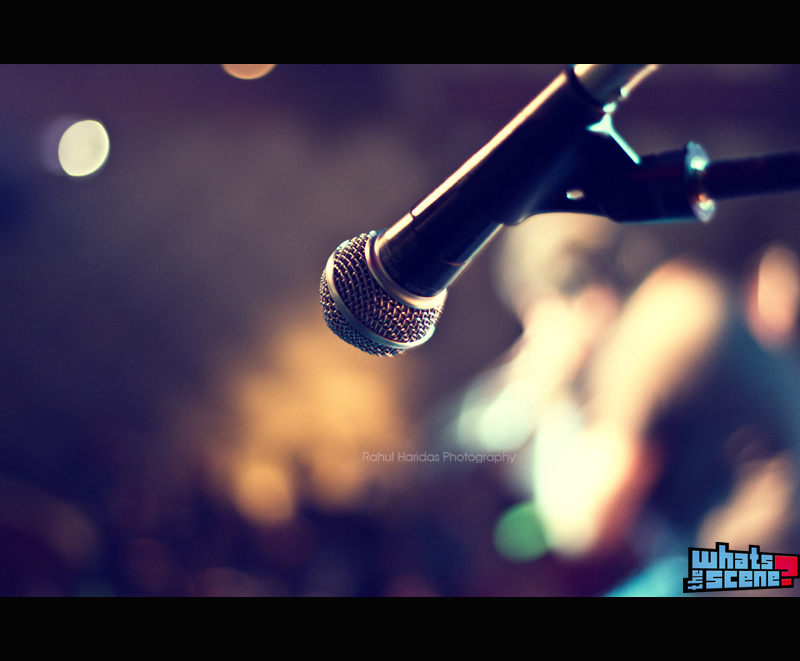 There are times during gigs when things appear to go downhill and no one is able to spot them – not the musicians or the technicians or even the sound engineers, and the end result is disappointing. This was NOT one of those gigs.

On 22nd January 2012, 8:00 p.m. onwards it was all hands on deck – what can be described as one of the best recoveries at Blue Frog that I have personally witnessed in the local music scene. Though the overall gig could only be termed as moderately good, it would be wrong for me not to credit the musicians and their crew for their presence of mind and professional approach to the situation. 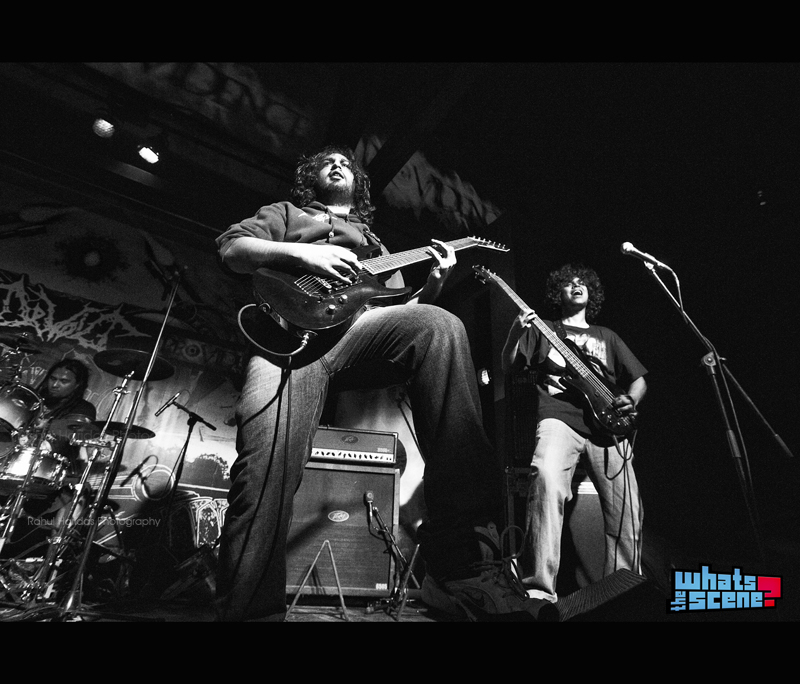 The show started with Providence opening with ‘Glass Eye Dawn,’ their instrumental track, which also served as the sound check. The sound engineer Akash Sawant was quick to respond as he immediately fine-tuned the audio levels to a perfect blend. The next track, ‘Source Code’, was power packed and now supplemented with the vocals of Sunneith Revankar. Around this track, I began to notice that the bass drum’s volume had been fluctuating as it became softer during the double bass parts. Akash was quick to respond and the problem was taken care of right away. Throughout the lapse, Aaron remained focused and precise behind the drum kit.

‘Watch Them Fall’ was the third track on the set list. Sunneith’s vocals were spot on; as a matter of fact, he had been consistent throughout the show and had not appeared to have encountered any sort of difficulty. The track was well-played and simultaneously had visuals from the famous Xbox game ‘Gears Of War’ on one of the screens above, which proved to be a nice combination. Shezan and Charan’s guitar playing amazed the crowd as they continued to scream and sing along with the track. 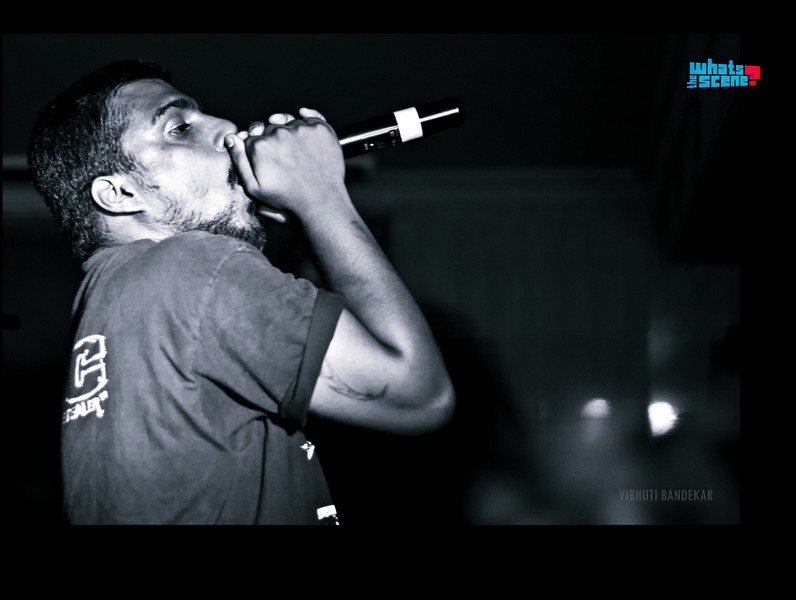 The track that followed next was a Sepultura cover called ‘Spit’ which was nicely done. The second cover came immediately introducing a guest vocalist Biposhree Das of the band Albatross. ‘Trooper’ by Iron Maiden was up next. This, in my opinion, was the least impressive track by the band. The start of the track was bad as the guitarists played a few wrong notes in the beginning. The vocals were not impressive either as they seemed to soften up every now and then, sometimes even inaudible. Despite the unappealing start, guitarists Shezan and Charan recovered well.

The next track, ‘Talk Shit, Get Hit’, brought Sunneith back on the microphone. The start of the track again appeared edgy but this time they recovered quickly making it barely noticeable. The track was supplemented with visuals from the famous anime Mobile Suit Gundam which was very much in sync with the music. They finished the set with ‘Prosthetic’, which opened with a nice drum and bass intro.

Out of all the musicians, Sunneith and Srikant were the most consistent and appeared to have encountered no difficulties whatsoever. Shezan gave the crowd something extra special with his solos which kept them screaming with admiration. Charan held his ground and did not give up despite his guitar strap falling off at one point and also after facing a glitch – the kind of problems that usually cause musicians to lose timing for a fraction of a second. But Charan’s timings did not falter nor did he show any drop in performance. Aaron also faced problems such as drumsticks snapping, which he quickly changed and also the breaking of the china-cymbal, which could not be helped. The important thing is that he was determined to deliver and he did.

I have nothing much to say about the crowd because every time I’d glance at them they would either be headbanging or moshing, which was a clear indication that that they were having a great time. The crowd interaction was adequate and nicely handled; though this wasn’t the best show of Providence that I have witnessed. However, this was indeed the first time I had seen them battling the odds and they had emerged victorious. 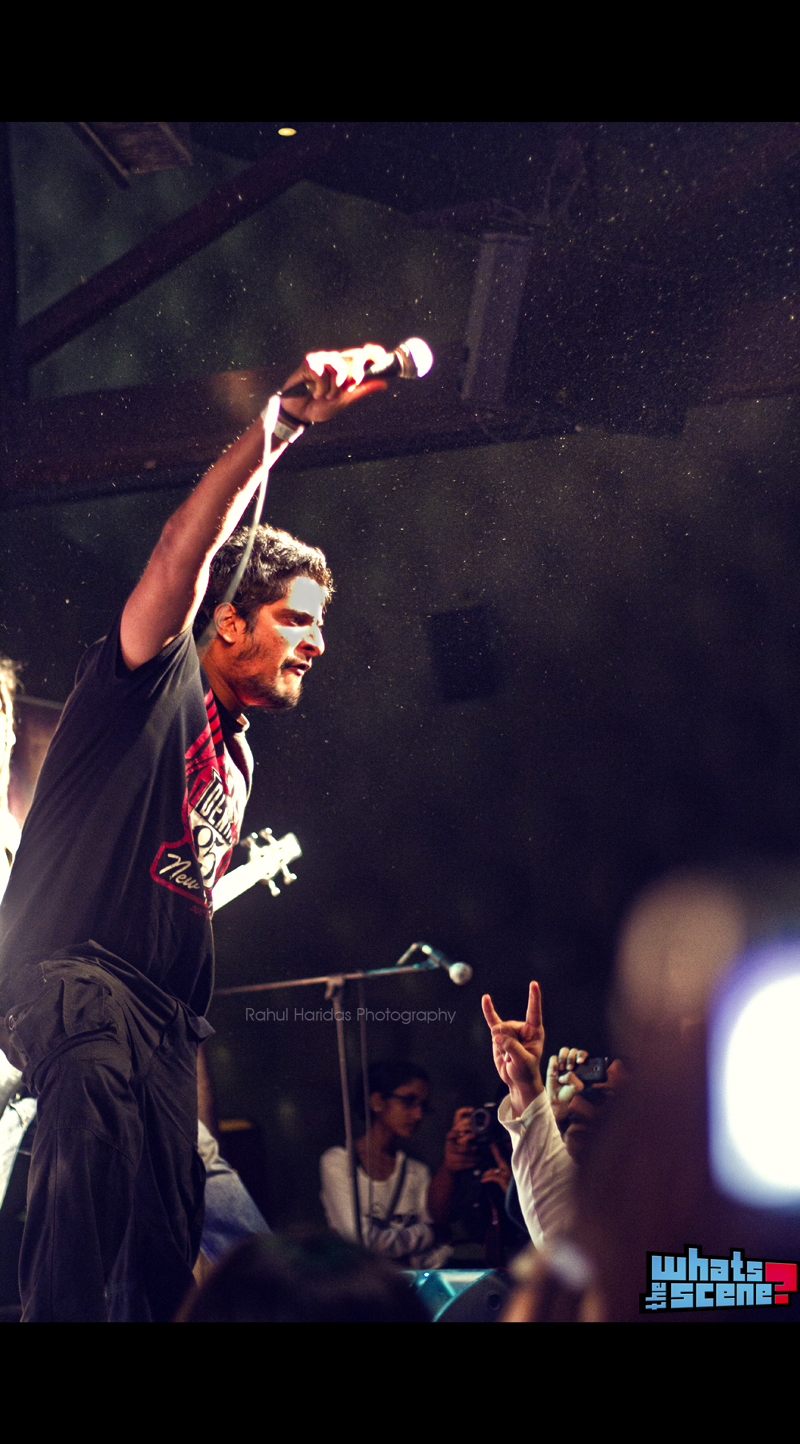 Zygnema was on stage next and they kept it straightforward with We Came, We Saw, We Conquered. The intro track ‘Phobia’ was played over the PA as a video montage of different locations in Mumbai and footage of the terrorist attacks were shown on the screen. As the intro track played the band members slowly took to the stage. ‘Phobia’ is originally an intro to the track ‘59′ which refers to the 59 minutes of terror that Mumbai had suffered during the terrorist attacks. I’ve been following this band for over half a decade and I can confidently say that this is one of their anthem tracks. It was a good start – the crowd immediately began to sing along and it grew louder as the chorus began. Parts of the track had off-timed drums, which made it sound really good.

The next track ‘Machine-State Hibernation’ was an intensely powerful track that demanded everyone’s attention. Mayank’s drum patterns were crisp and precise and Sidharth’s breakdowns on the guitar were clear and spot on. Ravi’s bass in my opinion was a little softer than it should have been but audible nonetheless. To this music, Jimmy’s vocals were a brilliant mix.

After playing the track ‘Endangered’, the band announced that they were filming the show so as to use the footage in the DVD they plan to launch soon. The next track ‘Scarface’ is a Zygnema classic. They performed it effortlessly and the crowd sang along. Although all the tracks comprised of good breakdowns, I personally liked the breakdowns in ‘Discriminate’. 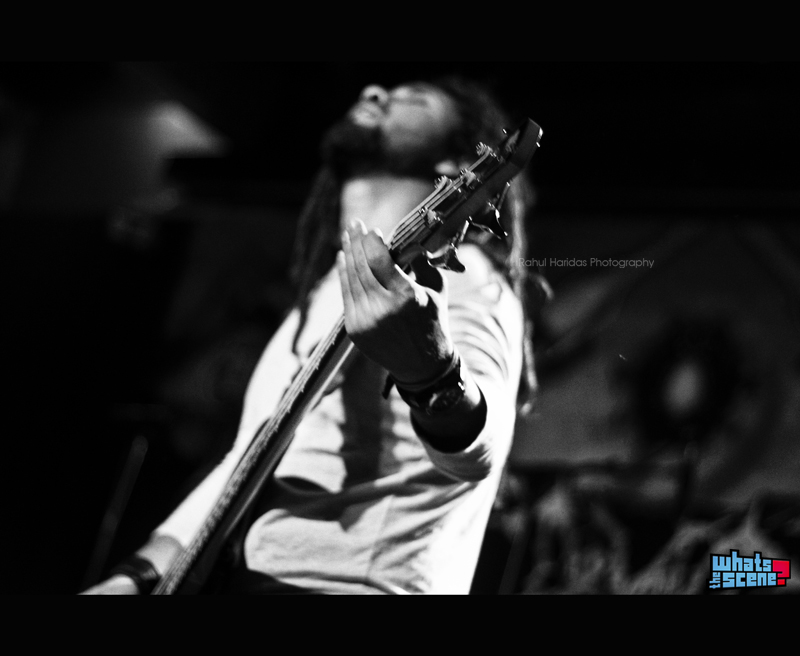 If fate was to put anyone to test on this night then it surely had to be the guitarist(s). As the track ‘National Disaster’ was being played, Sidharth’s tone sounded slightly odd and he also made a minor mistake while playing the solo. Thankfully, for the rest of the show, Sidharth held his ground and played flawlessly.

‘Theory of Lies and Negation’ followed next, after which they played ‘Shell Broken, Hell Loose’. The track went well and to the crowd’s surprise, Providence’s guitarist and the band’s long-time friend Shezan came on stage and jumped into the crowd. Jimmy followed Shezan’s lead by jumping into the crowd while they played their final track ‘Born of Unity.’

The set ended in high spirits as the crowd repeatedly requested them to play tracks by Pantera. Overall, except for the low bass volume and the minor mishap in the track ‘National Disaster’, Zygnema’s set went very well. If they had faced any more problems apart from the ones I noticed, they were well taken care of, which is a huge bonus to them and the sound engineer Akash. 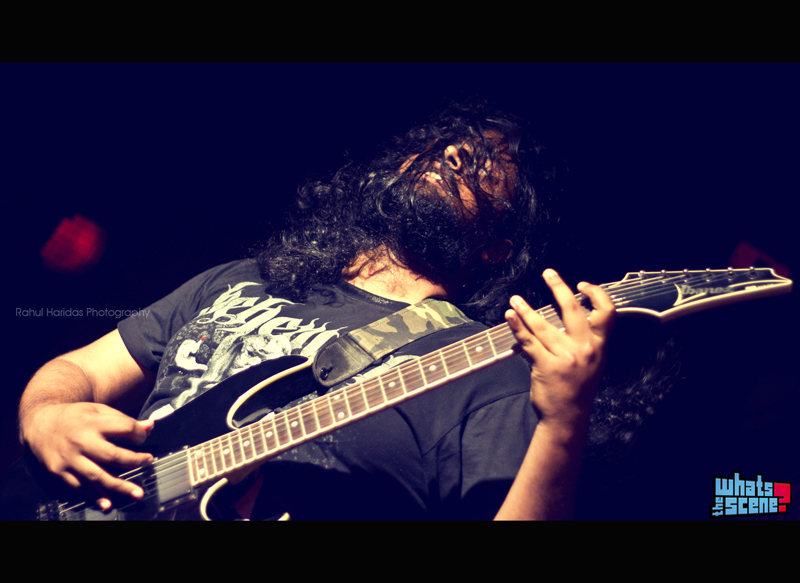 This was a very important night for Devoid as it was their first gig with their new bassist Abhishek Kamdar. They began with the track ‘Battle Cry’ which had a deep and heavy bass line in the intro. Bad luck was quick to befall on the guitarist Sanju, as his guitar strap came off and the strings snapped. Before it was too late, Sanju quickly reached for another guitar and continued the track. The second track played was called ‘Possessed’. Shubam was very good with his drum patterns and Arun handled guitars and vocals without any difficulty. Abhishek played some nice bass runs in the track and Sanju gave it the finishing touch with an amazing solo. The track was supported with some blood spatter visuals.

Up next was the track ‘A God’s Lie’ which is titled after their album. This is a very famous track and almost everyone present there knew the lyrics and sang along. I specifically liked the harmonizing guitars of Arun and Sanju. At the end of the track, Arun took a moment to thank the fans for the support they have given over the years. 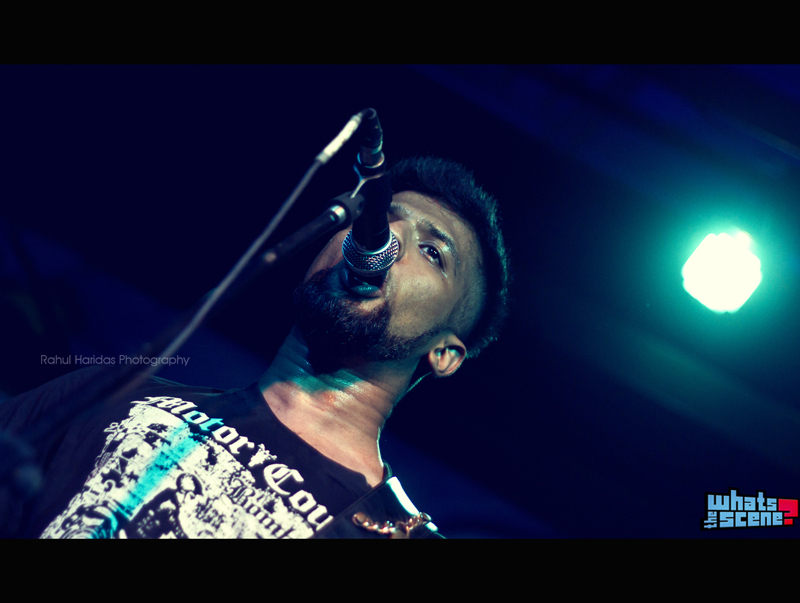 The music resumed with the track ‘Devoid Of Emotions’, after which they played ‘Hate Cult’. To me, one of the biggest treats was to watch Sanju’s solos. Even though they were played at high speeds, the precision and clarity of notes was very impressive. The next tracks were ‘Black Fortress’ and ‘Beer Song’ – both evidently very familiar to the audience as they sang along with the band. The band closed their set with their latest track called ‘The Invasion’. It was the first time they had played the song live. It wasn’t as well blended as the previous tracks but the crowd enjoyed it nonetheless.

Kudos to Arun and Shubham for holding the fort, and to Abhishek for doing a good job with the tracks even though he barely had the time to learn and practice the songs after having joined the band. Credit also goes to Sanju for keeping his cool and still delivering those intricate guitar solos.

It is worth making a special mention of the sound engineer Akash Sawant for sitting through the entire show attentively and keeping the sound levels at the right decibels, and for having the presence of mind to make corrections where required, intelligently. All in all, there were many reasons and factors that could have made this event a total disaster. However, full points to the bands for preventing anything from going wrong and sending the crowd home happy and satisfied.

Chaitanya Mohan is the Vocalist of Mumbai based band Frozen Chimes, his other interests include Movies, Anime, Manga, Writing, Football and Comedy. Follow him on Twitter @somatogyric