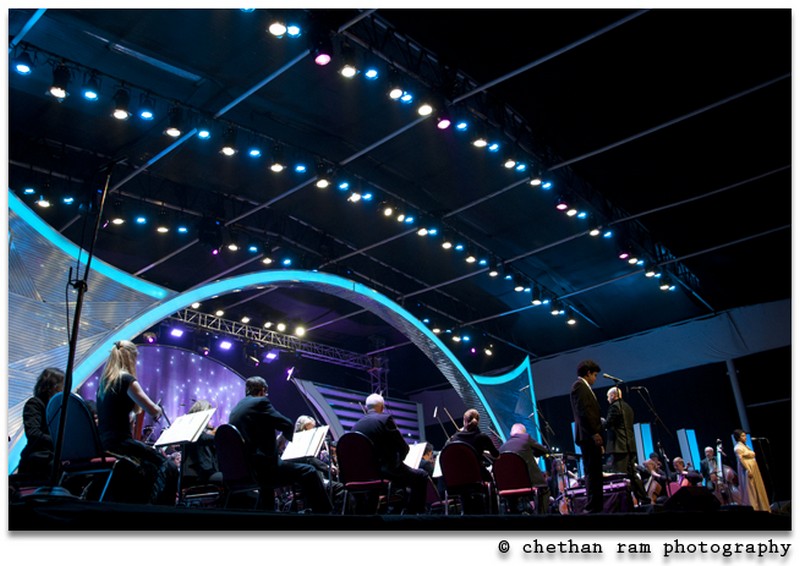 60 years of diplomatic Indo-German ties deserved a massive project highlighting the cultural exchange as managed by the Goethe-Institut/Max Mueller Bhavan. For probably the first time ever, a European film orchestra – one of the last few surviving – would perform A.R. Rahman’s film scores in a multi-city tour. The German Film Orchestra Babelsberg was to perform the tour finale in Bangalore. The event received fairly lukewarm promotions relying on the Rahman tag to motivate people to flock to the free-of-cost event.

All the roads to Palace grounds were jam-packed with cars ferrying the elite to the event, compounded by the weekend dozen weddings that were within earshot of the neatly enclosed venue. The multitude was spread (depending on who they were) between three gates strong armed with impatient bouncers, and the venue was interspersed with small eateries selling overpriced food (Surprise?) The space of three football fields was enclosed with aluminium sheets and lined on the inside with cloth and since the support columns were very tall, it made you feel you were inside a large interior space. 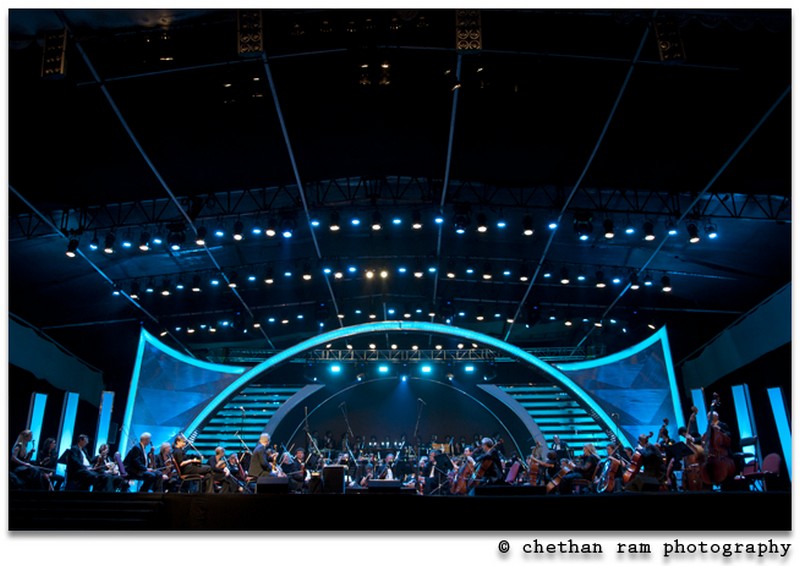 Since the concert had already begun when I reached my seat, the first thing that struck me was the abnormally low volume of the music. Being accustomed to the typical loud pub gig, it was a pleasant surprise that the 100-man-orchestra in addition to the choir from Rahman’s KM conservatory produced a sum output that was very delicate on the ears. While on the subject of balanced sound, there was also a very good distributed video display system that projected delay compensated live camera feeds onto half a dozen flat screens for the thousands gathered. The massive stage accommodated all the musicians and vocalists comfortably while drawing attention to the stage set-up and props. The five rows of LED parcans washed the stage with a new color on every thunderous Timpani drum + Cymbal Clash. Watching an orchestra perform live is an equal visual and aural treat! With each section coming live and then disappearing, there would be so much happening on the stage that it would be best if you’d know your orchestral arrangement in order not to get lost. 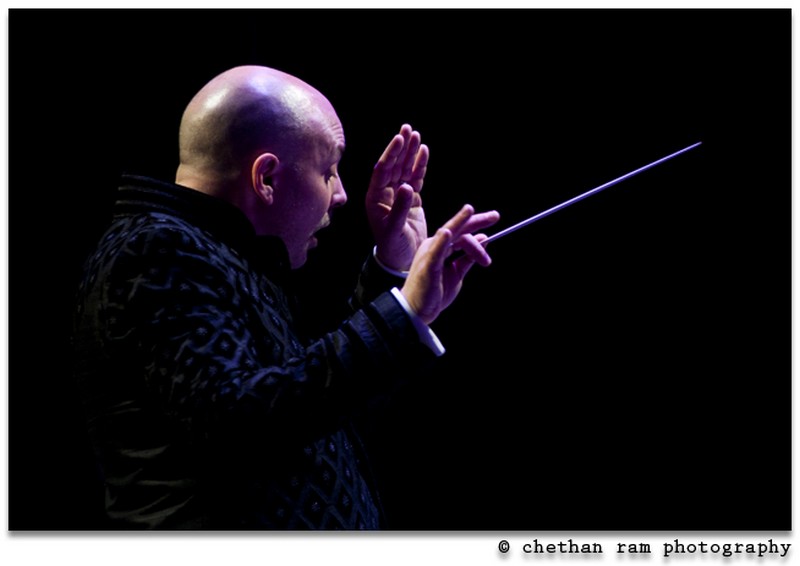 By the time I had warmed up to the atmosphere, the horn sections brought on the rousing ‘Tamizah Tamizah‘, of the ‘Cry Of The Rose’ suite from the movie Roja. Naveen Iyer on flute was the soloist here who tenderly improvised on ‘Kaadhal Rojaavae’. The semi-circular video screen behind the choir brought on scenes from Robot and the orchestra performed the themes for a few killer action sequences. Rahman, if he was present, would typically have talked to the crowd at this point to explain the film scoring process, and the intricacies of creating tension with the background score. Kavita Baliga and Arun H.K sang brilliantly on the ‘Lord Of The Rings’ section with the intense battlefield themed score, to wrap up the pre-interval set. A sigh of relief to all parents with restless children who had too much to drink before the show started. Hordes of people made their way to the exit, probably now that the free concert had been customarily attended. Other people in the VIP section were too busy checking email on their phones or plain bored out of their wits after finding out that Rahman has a sizeable international repertoire of music that they didn’t pay much attention to. 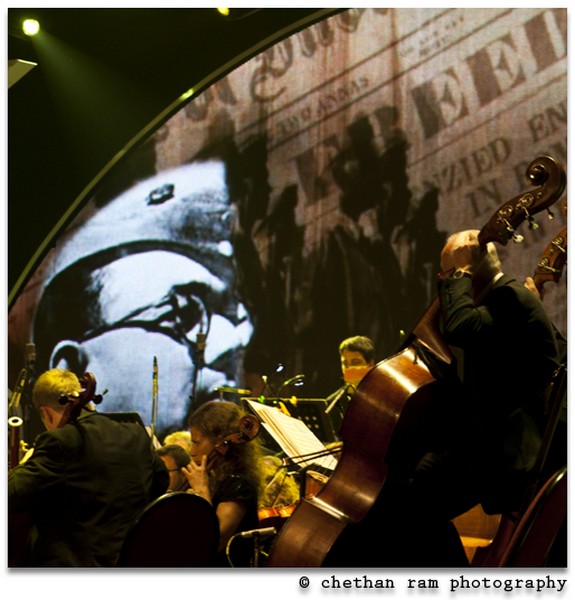 What I was engrossed with (and so were the video-feed cameramen) was the last row of the first violin section, where this angelic form was sitting, solemn and determined. A right hand that moved in a graceful yet practiced stroke, with a loose wrist gripping the bow, extracting the value and virtue of that one single note sustained for just the right time. It was for the first time I really watched someone play a violin with that dedication and then realized how synchronized an orchestra needs to be. Suddenly it wasn’t just one person who caught my attention. I saw how every vibrato was matched in the same measure by everyone with a violin or viola or a cello and how every bow moved together in clockwork precision, all relying on the tip of the conductor’s baton – Matt Dunkley – the man responsible for weaving this tapestry of sound. 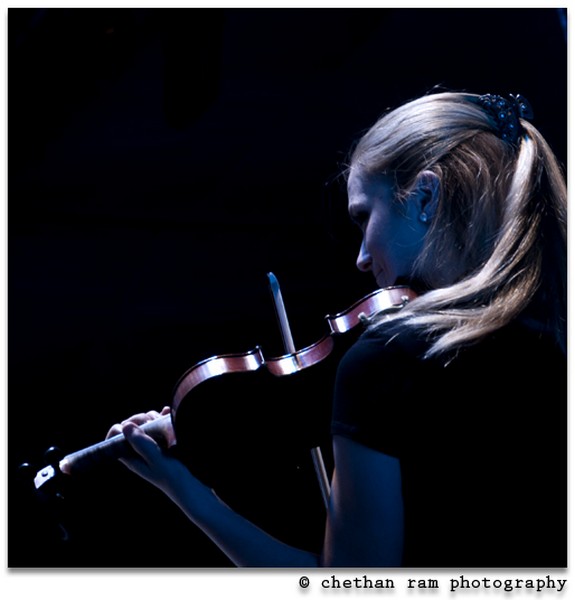 The post interval set began with the Bombay suite and moved  into a medley section that was a tribute to Indian music composers coupled with a video montage that played behind tunes like ‘Malarndhum Malaratha‘, ‘Aap Ki Nazaron Ne Samjha‘, ‘Kehna Hai Kya‘ and ‘Kal Ho Na Ho’. The audience managed to muster some energy to applaud the track after being teased with staple film songs. The loudest of which was reserved for Katrina Kaif when her image was in the video montage mix over the Meenaxi suite. This featured her amongst the other film actresses to grace Indian films over the decades. 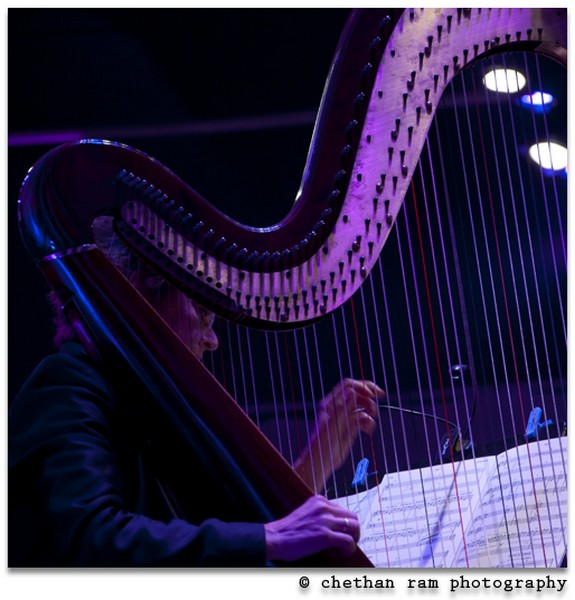 The highlight for the evening in my opinion was when Asad Ali Khan came on the stage for the Slumdog Millionaire suite, with his sitar solo going beyond classical music and fusion to crossover into uncharted territories. This moved into ‘Mausam and Escape‘ – for a great way to finish off the show. And in case you’re wondering – yes, Matt had to turn pages on the score sheet himself!