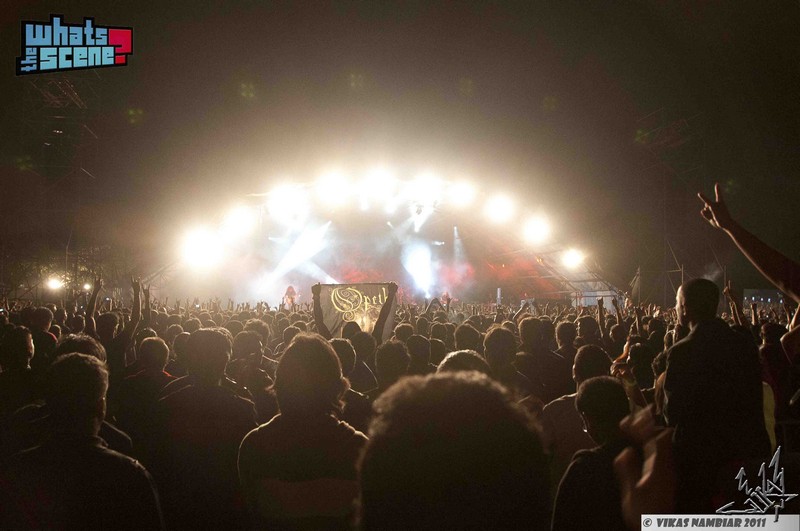 The fact that the Metal scene is exploding in India is pretty well known. Over the past half a decade, an unprecedented number of international metal bands have played at various music festivals in the country. Back in 2010, a hitherto unknown entity called Overture India got Lamb of God down, much to the Indian metal crowd’s joy. After a year’s hiatus, they announced that Opeth would be headlining the second edition of Summer Storm on 5th February, 2012 (which isn’t exactly summer, but we wouldn’t hold that against the organizers). Foreign bands Suidakra from Germany and Nothnegal from Maldives, as well as local metal bands Theorized and Eccentric Pendulum from Bangalore, were added to the lineup before the festival. 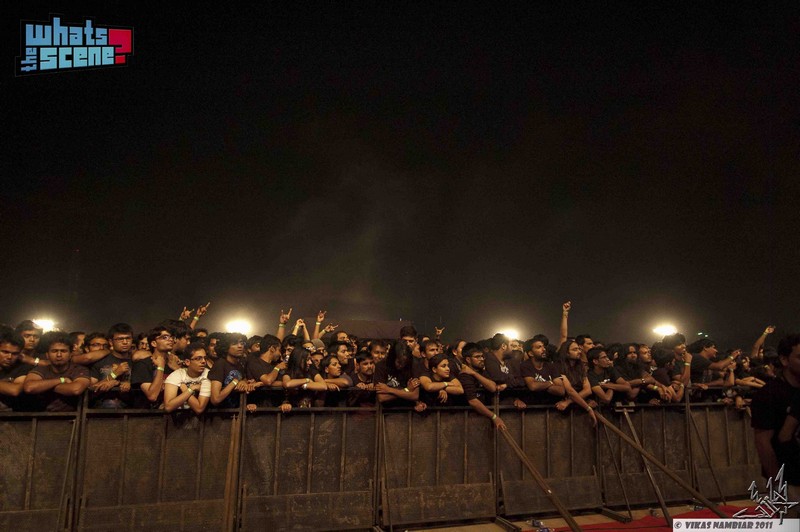 Palace Grounds in Bangalore has turned into a Mecca of sorts for the Metal fans in India, since most of the big Metal festivals are held there. On the day of the concert, all roads leading to Palace Grounds were thronged by kids in black t-shirts from all over the country, as well as neighbouring countries. The venue had all the usual food and metal merchandise stalls, although booze was nowhere in sight! However, it was heartening to see that adequate supply of water was maintained throughout the concert, since at most gigs fans get desperate to find water near the end of the gig. 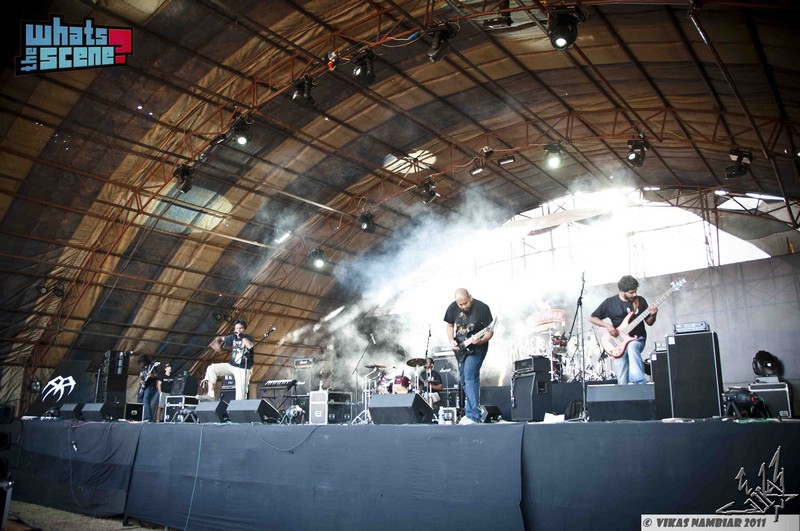 The gig started on time around 4 p.m., with thrash band Theorized opening the proceedings. They had released an impressive debut EP, False Hope of Tyranny, a couple of years back although their setlist for the gig consisted of only two songs from it – ‘Dark Incarnation’ and ‘Raise The Dead’, while the rest of the set consisted of new originals. Theorized has improved by leaps and bounds, in terms of tightness on stage, crowd engagement and interaction, in comparison to the only time I saw them live 2-3 years back in Mumbai. The band plays new age thrash with tons of groove, which a section of metal fans appreciate well. 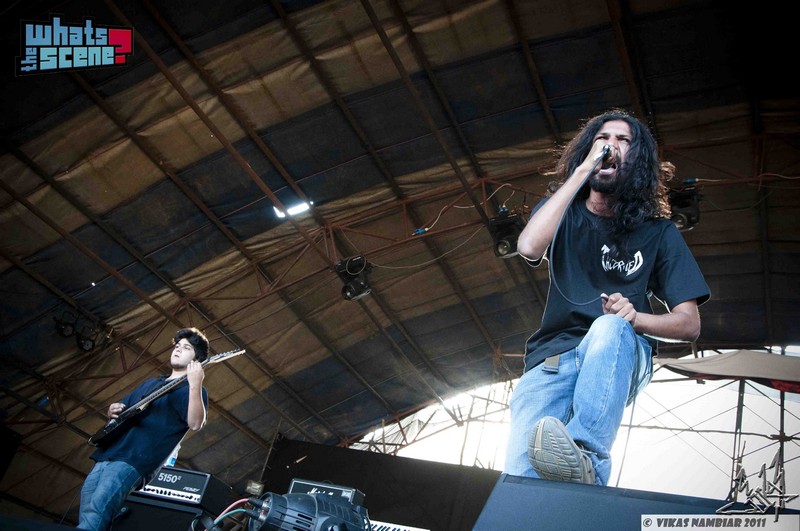 Progressive metallers Eccentric Pendulum were next up on the stage. Now this band is really progressive, unlike the plethora of metalcore bands that use djent to masquerade as progressive metal. Searing thrashy riffs accentuated by cleverly crafted guitar solos and intelligent progression typifies their music. However, their sound during the gig lacked the “fullness” since a guitarist was missing from their lineup. They played mainly from their debut full-length Winding The Optics and managed to get the crowd into a frenzy when they played the impressive ‘Mathematicians of Ambient Waters.’  Both, Theorized and Eccentric Pendulum, had their merchandise for sale at the gig, which included t-shirts and CDs. 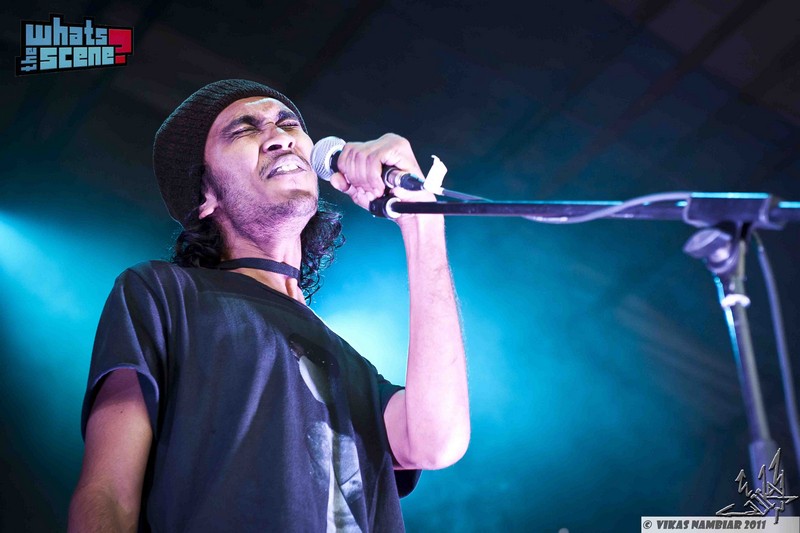 The Indian bands finished playing by 6 p.m. after which the first international, and pretty unknown band, Nothnegal came up on stage accompanied by appropriately dark ambient synths. It was very mysterious that despite hailing from the tiny atoll called Maldives, Nothnegal had somehow managed to rope in drummer Kevin Talley (ex-Dying Fetus and ex-Chimaira) and keyboardist Marco Sneck (ex-Kalmah) who were part of bigger and much better bands. But what perplexed me the most was how a band with members from good bands managed to be so mediocre. To be honest, the first part of their set was above average, although the guitar soloing ability of the frontman is questionable. This was the part of the set where they had harsh vocals, metalcore-ish chug-chugging riffs ably supported by the impeccable keys of Mr. Sneck and tight drums of Mr. Talley. It was during the last two or three songs that the band threw a huge curveball by introducing a different singer with clean vocals. That was when they dipped below the waves of mediocrity and I headed to grab some of the Kaati rolls. 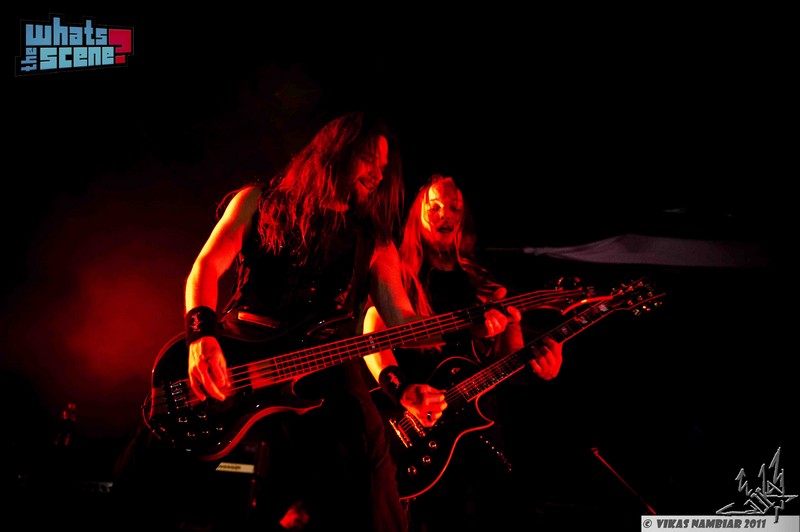 The Celtic metallers from Germany, SuidAkrA, took to the stage next. They are Celtic not by the sole virtue of having a bagpiper in their midst, but they do incorporate Celtic tunes and themes in their songs, and their evidently Celtic costume. They started off with the incredibly catchy ‘Pendragon’s Fall’, which was probably the first time many people, who had missed Eluveitie, heard a Celtic metal tune. They went on to play songs culled from almost all their albums, like ‘Wartunes’, ‘Dowth2059′ and ‘The IXth Legion’. However, they had to cut short ‘Stone of the Seven Suns’ because the mandolin was out of tune. SuidAkrA’s set was characterized by the highly infectious, energetic and upbeat Celtic tunes, which got the crowd suitably primed for Opeth. However, their set was marred by a mishap when a barricade collapsed on a poor guy’s foot who had to be carried off from the spot and SuidAkrA even stopped between two songs to enquire about him. 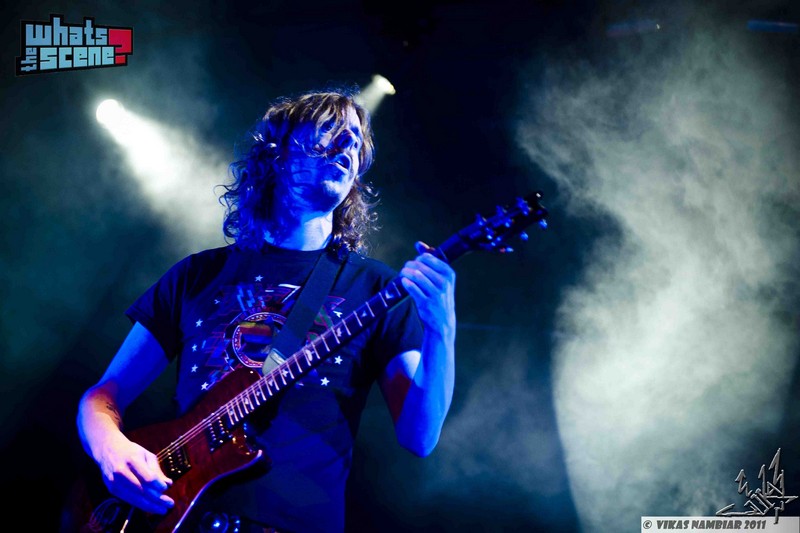 Opeth took a while to come onstage, which they did around 8 p.m. to a backdrop of the album art from their latest album ‘Heritage’ and ambient strains of ‘Through Pain to Heaven’ (a Popul Vuh track). They straightaway launched into playing two songs from Heritage, ‘The Devil’s Orchard’ and ‘I Feel The Dark’, back-to-back. The incredible proggy-ness of The Devil’s Orchard was too much to even properly nod your head to! The diminutive Martin Mendez has to be one of the best bassists in Metal at the moment. The groovy low notes he plucks from his bass are nothing short of exquisite! 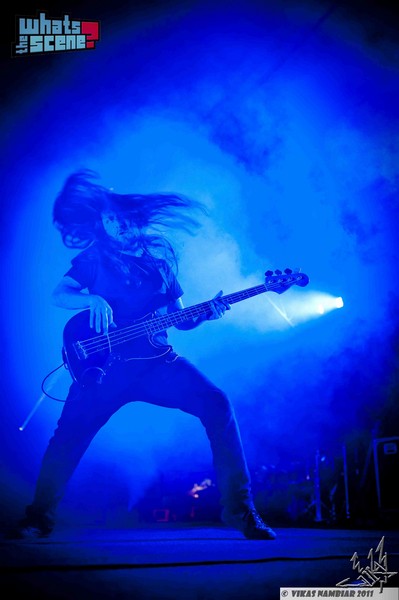 Mikael introduced the next song as one from Martin Mendez’s first album with the band, before he started with the hypnotizing fingerpicking intro to ‘Face of Melinda’ from Still Life. Next, they played ‘Slither’ from Heritage again, as a tribute to Ronnie James Dio. With trademark self-deprecation Mikael introduced the next song as the only album he played bass in and not too well at that. The soothing cadence of ‘Credence’ from My Arms, Your Hearse and the one that followed it, ‘To Rid The Disease’ from Damnation, was made more mesmerizing by the haunting atmosphere and keywork provided by the “new kid on the block” Joakim Svalkerg. 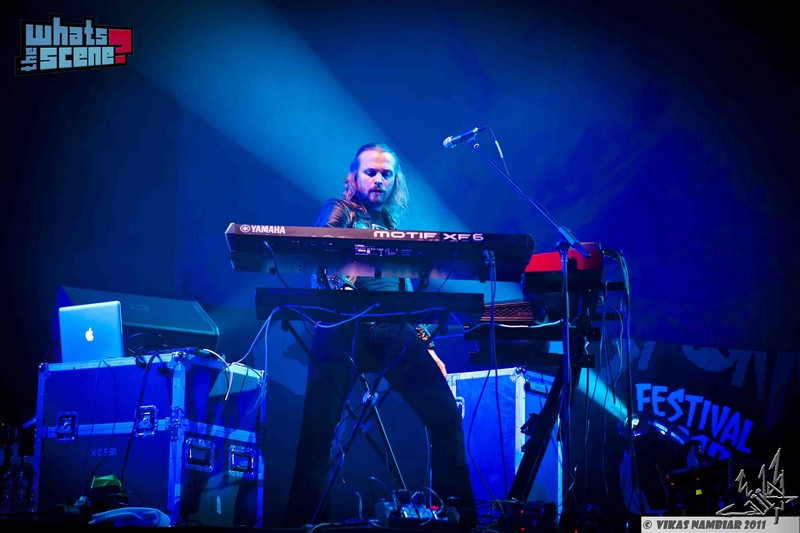 As is the case with almost all Opeth concerts, Mikael, the standup comedian that he is, reserved his most biting ribbing for Mendez, calling him “chickenshit” for sporting a moustache like us Indians but hiding it in his beard. At this point, Joakim was facing some problem with his keyboard and Mikael fumbled with the order of the setlist too, provoking him to ask the audience to shout “F**k you, Mikael”, something he had been asking the audience to do all evening! After playing ‘Folklore’, from Heritage, he obliged the expectant crowd by revealing they were moving on to the heavier part of the set. 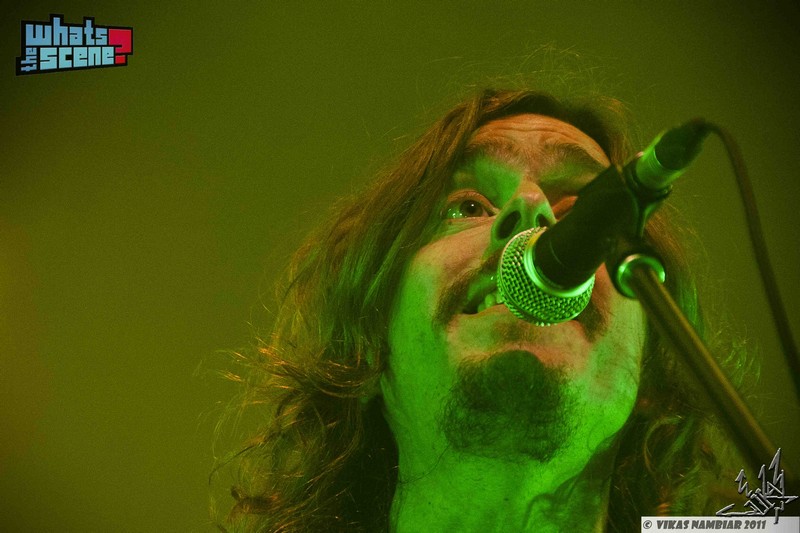 They chose ‘Heir Apparent’ from Watershed to start the Death Metal proceedings. I felt truly blessed when they next played one of my most favorite Opeth tracks ‘The Baying of the Hounds’ from Ghost Reveries, a song they don’t play live very frequently. The endearing part of this song is that it has all the Opeth ingredients in equal parts – the brutal part suddenly switching to mellower portions accompanied by heavenly ambience! Every great band has a crowd-sing-along track, and for Opeth, it is ‘The Drapery Falls’ from Blackwater Park, which they played much to the crowd’s frenzied joy. Coming back for encore, Mikael played the starting lick of ‘Deliverance’ joking all the while that Slash had stolen it from him! It was a fitting finale with its long drawn out, frantic headbang-inducing outro. 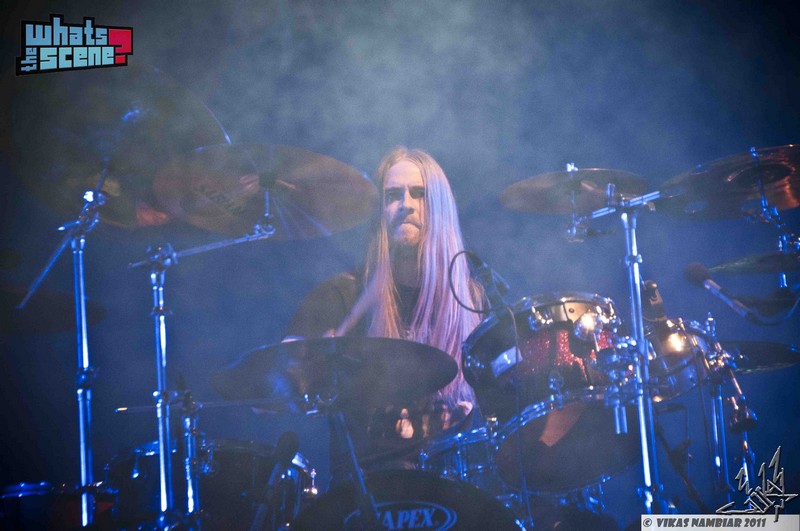 Many were apprehensive before the gig, about Mikael Akerfeldt’s ability to growl anymore and whether the set would be dominated by songs from Heritage, which had got mixed reactions from the Opeth faithful. All those fears were put to rest over the course of the evening, as Opeth probably played one of the best sets ever, with songs from all the albums, except the first two. 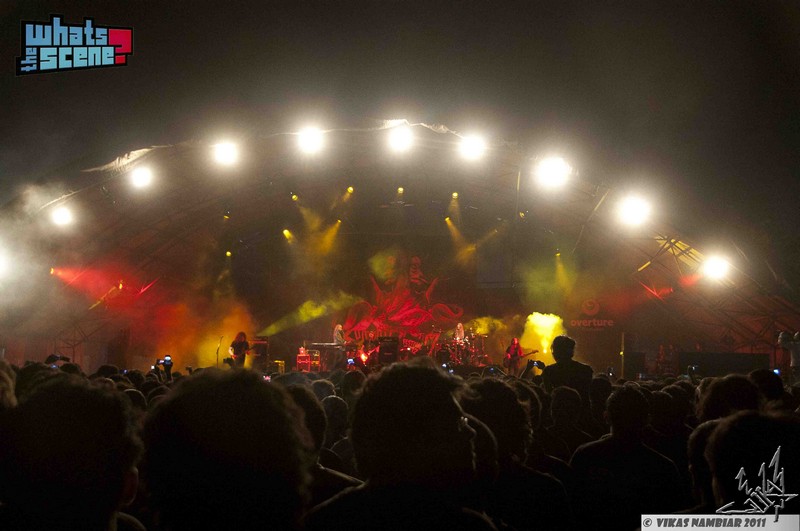 Overall, Summerstorm 2012 lived up to almost everyone’s expectations. The sound was decent for most parts, although it could have been better during SuidAkrA’s spell. The organizers were diligent enough to ensure that everything progressed smoothly. My only grouse is that there could have been a good mix of Indian bands from across the country much like the first edition of the Summer Storm Festival, and Nothnegal could have been avoided altogether!

Summer is miles and miles away, but Summer Storm is here to stay.