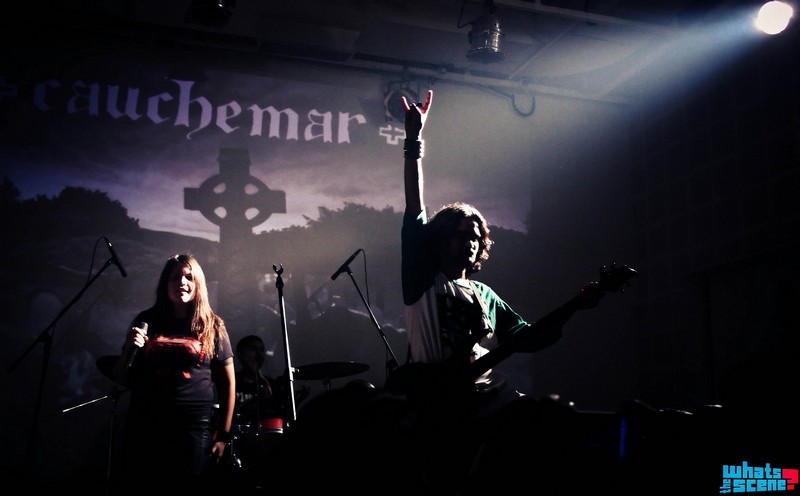 Cauchemar is a traditional Doom Metal band, formed by Canadian couple Annick Giroux and François Patry. Currently on a worldwide journey, Cauchemar did a one-off show in Bangalore, India as part of the TrendSlaughter Festival. WTS caught up with the travelling doomsters before the gig for a fun-filled chat. Read on to find out fun stories of a band on the road…

WTS: Hello, Welcome to India! Let’s start off with a little bit of history about Cauchemar.

Annick: Thank you! We formed Cauchemar in 2007. Well, I played in a Thrash Metal band called Exterminator.

François: I had just projects for fun, and Cauchemar is the first thing that led to something…

Annick: Yeah, first serious band… It’s the only band I recorded stuff with. So, we formed the band together, as a project.

François: Just the two of us in bedroom doing Metal! (chuckles)

Annick: Yeah, that’s it. It was basically a project in which we wanted to write music that we liked. We both like Heavy Metal and Doom Metal. So, it just came like that. We tried finding members for a long time, but it was hard trying to find the right members. Finally, we found the drummer two hours away from our city and we recorded the songs for our EP in 2010 springtime. We released it on CD and Vinyl via Nuclear War Now! Records. Since then, we played three gigs in Canada and we also did some shows in South America and this is our first show in Asia.

WTS: What do you make of the recent resurgence of retro or traditional-styled Heavy Metal bands? Many bands are opting for the classic Doom sound, why do you think that is happening?

Annick: Well, it’s always been there, but, as you say, now there are more bands doing it, because although there are lot of people in extreme Metal, the old style of Heavy Metal is the best Metal there is. That, and Doom Metal… because, it’s traditional, it’s timeless. You could listen to it after 20 years and it will still sound fresh and good. But, if you listen to, I don’t know, Black Metal with keyboards, you would say, “Oh it is so nineties!”

François: And, it has always been there, but it goes up and down in popularity. It was really big in the early nineties or so, but the bands are always there.

Annick: There are always reunions of big bands too, like Judas Priest, for example, who reunited – about 5 years ago? and Sabbath. So, people cover them in the magazines and others read about them…

François: People dig a little bit further and find other bands that are close, maybe in sound.

Annick: Yeah, and you know, stuff like technical Death Metal or Metalcore are getting unreal-like, or superficial. So, people want to go back to the roots. Anyway, that is what we think. HEAVY METAL RULES! (flashes horns)

WTS: Since you’ve released just one EP with five songs in 2010, what material do you play live?

Annick: Oh, we play all the songs and also some covers. Since the time we’re travelling, we wrote seven new songs, actually.

Annick: The new songs, we don’t play them live yet, because the drummer has not written his drum parts yet. Like right now, we have Indian backup members, Ganesh and Deepak, and we didn’t write drum parts for the new songs. So, we are going to play the EP as well as a cover.

WTS: So, today’s show will have Ganesh Krishnamurthy and Deepak Raghu of Bevar Sea also playing with you?

WTS: How did it feel when Fenriz , the frontman of Darkthrone recommended you as “Band of the Week”?

Annick: It was a real shock! At first, Fenriz sent me an email, saying, “You should re-record the vocals, drink some beer and really concentrate”. Then a few weeks later, he listened to the album and he got it, you know. He was like, “Oh, I understand now!” and he really enjoyed it. But, I didn’t know that. He put it on “Band of the Week” and sent me this email, “I really like your EP.” It’s like you could say, the vocals are not everyone’s cup of tea or glass of beer (chuckles), but it is something to get used to and once you do, you appreciate it, I guess.

WTS: Female-fronted Doom bands, like Witch Mountain from Portland, Oregon also seem to be coming up. what do you have to say about that?

Annick: Well, I guess, the female voice sounds good with this style of music. There are not many females in Black Metal or Death Metal, because it is a very close-minded scene, right? The female voice doesn’t sound good in Death Metal. There are some females, of course, but it is very hard to get a good voice. And, there are always a lot of guys going, “Women in death metal scene!” (gestures in a macho fashion and chuckles). But in Doom Metal, it is very open-minded. I think the female voice sounds very good. Like, for example, in the 70s there was Coven, and in 80s…

François: But, people are rediscovering those bands now.

Annick: There are a lot of really obscure bands from the 80s and 90s. It’s always been there, but now those bands are getting more publicity.

Annick: No, it’s always been there. It is just that instead of a guy, it’s a girl, you know. For me, I don’t see a difference. It sounds good be it a guy or a girl. We didn’t want a girl to sing, actually. I didn’t want to sing for Cauchemar. I just wanted to be the bassist. But, as I said earlier, we couldn’t find any good members. So, I decided to take on the vocals and it just felt right. It could’ve been just him (points at François) singing, it is just how it happened, really.

WTS: How many shows did you play altogether?

Annick: In total? (turns to François) How many shows did we do in South America? Five? (counts) Five, six, seven, eight shows so far. This is our 9th show!

WTS: Did you ever get a chance to share the stage with your Metal heroes?

François: We played with Pagan Altar in Canada.

Annick: And we played with Vulcain, Inepsy, Midnight, Revelation, Blood Ceremony – we played like really shitloads of good shows. We were really lucky.

WTS: Tell us about your most memorable live experience. How was your South American tour?

Annick: It was really cool, because we went to some places that nobody else goes to. We went to a place called Temuco in Chile – it is in South of Chile – there were like 250 people or something, maybe, and they were so happy that we actually came from Canada.

François: There’s a good Metal scene there, but bands from outside never go there.

Annick: Yeah, they were really delighted. Like, for example, when we played in Peru, the crowd really went wild. (chuckles recollecting the experience) The venue was completely white – there were white walls – and after the show, there were blood stains on the walls!

Annick: …and the toilets were broken. There was even a couple f**king during the show! (laughs) It was pretty crazy! The people are so enthusiastic. They ask us for signatures, but on really strange things, like on napkins or arms. It’s pretty funny. Anyway, that was the response so far.

WTS: You have a cookbook – Hellbent for Cooking. Tell us more about that.

Annick: During the beginning of Cauchemar, I had that as a hobby. I asked my favourite bands for their best recipes, like recipes that represented them well, and they came from new countries and stuff like that. So, I compiled the book, I got a hundred recipes. I got the recipes, I cooked the food, I took a picture and I wrote a biography for each recipe. So, it’s like kind of encyclopedia of Metal, but with recipes. That’s Hellbent for Cooking, that’s how I mix Metal and food. So, it is kind of like cook your favourite meal, read the biography, and listen to the band while you are eating.

WTS: The Canadian Metal scene quite underrated – people don’t really know of many bands from Canada. Why is it so?

Annick: Well, it is like India. People don’t really know about Indian Metal. People, you know, like to be fed on really popular bands, but it is just underground. Just like our band is underground. If you ask most people in Canada, they don’t know us. But, yeah, there’s a really good history of Metal and a lot of hidden bands, hidden gems. I really know the Metal scene Canada, but I’m discovering new bands all the time. It’s unlimited.

WTS: What are the ideologies, or schools of thought, that you subscribe to which reflect in your lyrics and music?

Annick: We really like to write about horror stuff, freedom…

WTS: Horror as in gore horror?

Annick: No, more like Italian horror movies, cemeteries, death… stuff like that. Mostly we like to write stuff that has an interesting atmosphere, you know, magical atmosphere. But, all the songs have a different theme, actually, and so will the new songs as well.

WTS: This is your first time in India, what has been your impression so far?

Annick: We’ve only stayed in Bangalore, and we pretty much stayed with friends. So, we didn’t get to explore too much. We still have a month left in India. So, we will be going to Goa, and then Hampi… after Hampi, we are going to Delhi, Agra, you know, very commercial (winks) and to Varanasi, to see the Death, people dying (laughs). And then we will move on to Nepal.

WTS: Are you playing a show there?

François: No, this one’s our only show in Asia. The next shows we will do are in a European tour with the Canadian members.

WTS: One thing from India that you would like to take back with you?

Annick: Spices! And, maybe, I want to buy a saree – a purple saree. Also, Metal! I want to bring back some Indian Metal. Maybe, we can buy some records. Some recipes, maybe. I learnt to cook a little bit. Yeah, that’s pretty much it.