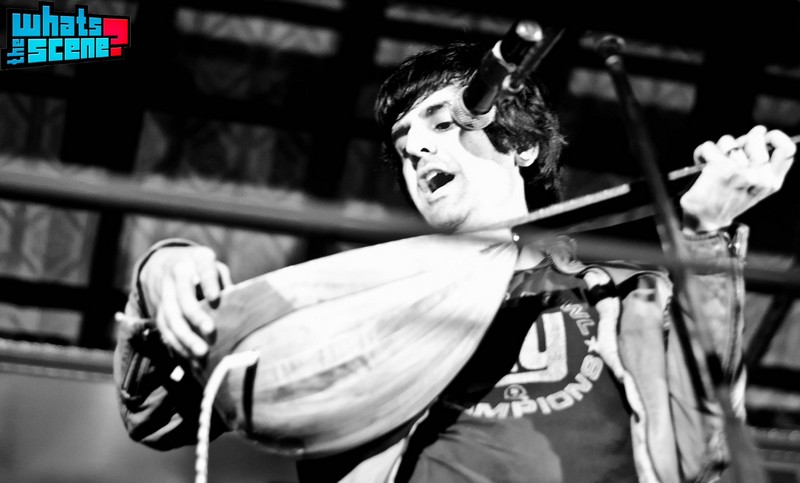 Goldspot is a Los Angeles-based band founded by singer/songwriter Siddhartha Khosla. They shot to fame with their debut album – ‘The Tally of the Yes Men’ and followed up with ‘And the Elephant is Dancing’. After a powerful performance at the Hard Rock Cafe, Pune on Jan 25th 2012, Siddhartha Khosla, the lead vocalist of Goldspot chatted up with the WTS Crew, here’s a peek into what he had to say…

WTS: Welcome to India! How is the tour shaping up?

Siddhartha: Thank you! The tour has been amazing, we had a great time! We’ve had wonderful audiences. We played in Lucknow, Delhi, Mumbai and now Pune. Up next is Hyderabad and Bangalore. The audience has been unbelievable. I mean, we have played for thousands of people already so it’s pretty amazing. We played at Blue Frog in Mumbai yesterday and they said it was the most number of people they had ever seen on a weeknight. So it was great – we had like 800 people last night!

WTS: Have you toured India before? How was the reception then?

Siddhartha: Yeah we have toured India a couple of times before. The response was amazing. We had a very similar response but with lesser people and now the number of people who are into Goldspot has increased substantially!

WTS: Tell us about your influences in music.

Siddhartha: I was born in the US and I grew up listening to the music my parents brought to the US. They brought all their music from India to the States – Mohammed Rafi, Mukesh, S.D Burman, Hemant Kumar, Kishore Kumar,  Geeta Dutt , Lata Mangeshkarâ¦I would know this stuff more than you, brother! And that’s the stuff that really impacted me and the stuff that I love. I listen to this now more than anything else.

WTS: We did notice some of these influences in your music – the Friday intro is reminiscent of S.D Burman. How does the western audience like it?

WTS: Weren’t you a part of the boy band Penn Masala?

Siddhartha: Oh man, yeah – Penn Masala! I was in another established group in college, and Penn Masala – a bunch of Indian guys was the new thing which was formed – great guys and wonderful musicians! They asked me to be their music director and I agreed. I created arrangements for them.  I was their S.D Burman if I can ever be that! (Smiles) The closest I ever got.

WTS: Your first album Tally of the Yes Men was a hit. How tough was it for you to come up with the second one And the Elephant is Dancing with all the mounting expectations?

Siddhartha: Easy. I never made any music with any expectations. For me it’s about making songs and sounds which is honest to me. Look, at the end of the day, I’m Indian and I grew up with Indian music in my blood. I grew up with Western music as well because I grew up in the US. I grew up with both cultures as a very integrated part of me. So when I write music, I write it with the old Indian influence and the Western influence. So when I made And the Elephant is Dancing, it was very easy because the first album Tally of the Yes Men did really well for us. It did well because no label told us what to do. I made that album independently. You know what the budget was for the album? Zero dollars. I made it on my own, with my own hard work. I had a day job. I worked 9 to 5 and from 6 in the evening to 2 in the morning for a year and a half, I made the album with a friend of mine – no costs. Music was my love. And a year and a half later we got signed because they loved the album so much!

WTS: An alternate version of your first album featuring A.R Rahman’s Chennai Orchestra was released in 2007. How did that come about?

Siddhartha: We finally got signed to a major label after one and a half years, and they told us “We love your album! We want to release the album in 6 months.”  I said, “No. I want to release it with the Chennai Orchestra.” They asked “Why do you want it with the Chennai Orchestra?” I said, “That’s the sound. I want them to play the old 60s, 70s Burman style arrangements.” They said “No, you can use the LA Philharmonic, you can use the New York Philharmonic, and we’ll hire them.” The label was just gonna throw money at us but I said no, I want to go to India and want to record with the Chennai orchestra because that’s the right sound and the label agreed. So I worked with Srinivas Murthy who is A.R Rahman’s senior music conductor. The guy is a genius. He and I wrote the arrangements together. I wrote some, he wrote others, but the ones he came up with were way better than what I could come up with – he’s amazing! He’s been around for a long time, so he knew how to create that old sound and he did it really nicely.

WTS: The intro for Friday has an awesome retro Bollywood sound. How did you come up with that?

Siddhartha: The intro – that (sings the Friday Intro) da – da da…da da – da dadada – the reason why that happened was Murthyji. He came up with that opening – he killed that.  It was beautiful! We took our shoes off and went to the studio and there was a 25 piece orchestra! These guys, with Murthyji’s direction, came up with the beautiful arrangement and that was (sings the Friday intro) da… dada… It was beautiful!

WTS: Did you cringe when you watched ‘Friday’ by Rebecca Black?

Siddhartha: Oh man! (Shakes head in disbelief) Rebecca Black! See, I love how much exposure artists have on the internet but this is like the one downfall with social media that garbage gets through. But you know what, I have to say – honestly I love the fact that she put it out, because it makes our version that much better!

Siddhartha: We have a new album we are recording now. It will be done hopefully in the next 3 or 4 months and will be released hopefully by the end of the year. We’ll do a lot more touring and we’ll come back to India as soon as we possibly can!

Siddhartha: GOLDSPOT! (Sid grins widely, everyone else howls) Coming to India when I was a kid with my cousins in Delhi, we drank a lot of Goldspot and Campa-Cola. And Goldspot was the most refreshing, bubbly, beautiful drink ever! It kills Fanta.

Aneesh Sanyal is a failed guitarist and a fake Bong. He cannot get beyond 80s rock and is a certified hedonist. He likes food, music and trees.

Interview with Thermal and a Quarter