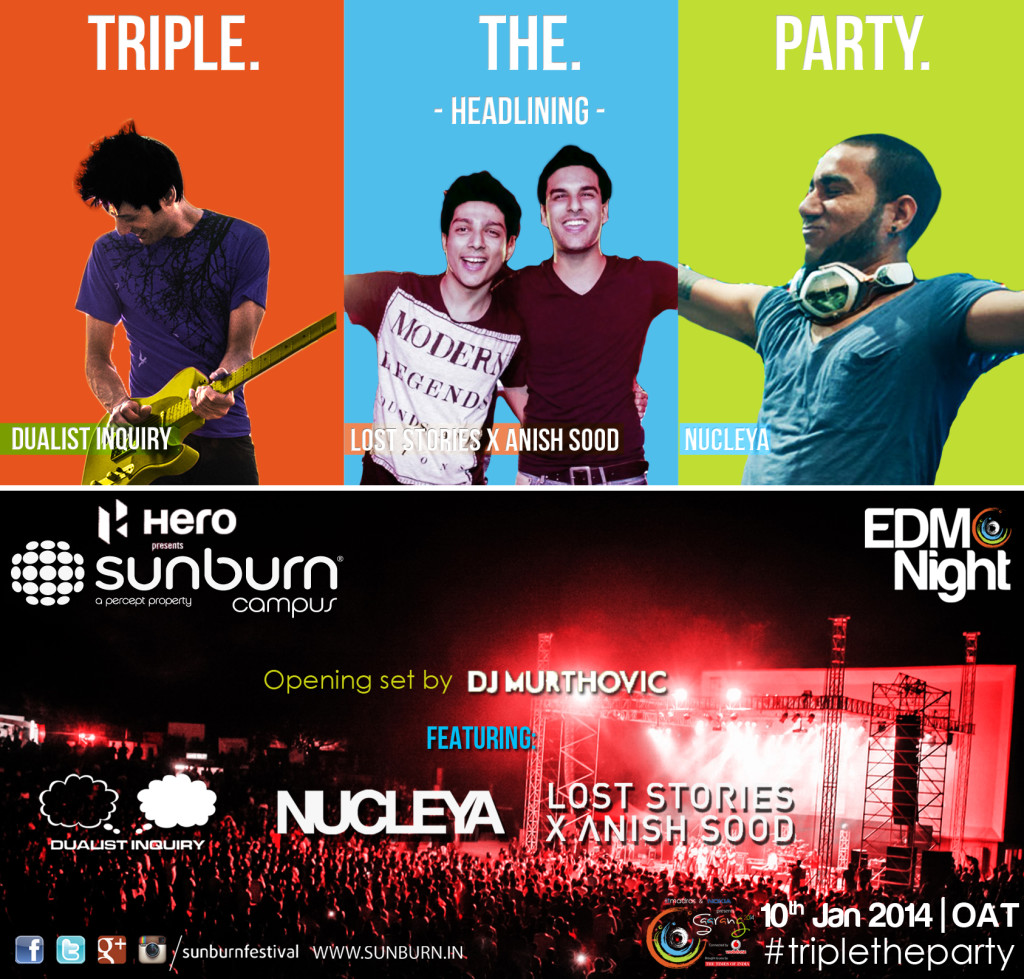 Come January 10th, Chennai will witness one of its largest parties with Sunburn Campus at IIT Madras’ Open Air Theatre. This time there’s going to be triple the party with Dualist Inquiry, Nucleya and Lost Stories x Anish Sood spinning their chart-topping mashups. The night will be opened by DJ Murthovic. This looks like one party Chennai does not want to miss!

Dualist Inquiry: (Guitar-driven electro rock)
Sahej Bakshi is a pioneer of his unique guitar-driven EDM in the country. After the runaway success at Saarang , last year has been phenomenal. He released his first full length album: Doppelganger, headlined at the NH7 Weekender (Pune), started his own band as a live project and has grown into one of India’s leading electronic music producers that the country just can’t get enough of.
Nucleya: (Dubstep, Bass, Desi)
Bringing the Desi Bass to Saarang, Nucleya is one of the most unique acts in the country. With albums including ‘Horn OK Please’ and tracks such as Akkad Bakkad, New Delhi Nuttah and Bangla Bass, his music is a fresh mix of desi beats and solid dubstep.
He has featured on the MTV television series The Dewarists, opened for David Guetta during the Eristoff Invasion festival and is playing at the NH7 Weekender (Delhi) this year.
Lost Stories X Anish Sood: (House)
Ending the party Sunburn-style is the duo that have taken parties across the country by storm and headlined at Sunburn Noida, Sunburn Mumbai and Bangalore this year. They have played alongside some of the biggest international names like David Guetta, Steve Aoki, and Fedde Le Grand, to name a few.
Murthovic: (Techno/House)

Author, fuser, educator, creator – DJ Murthy has over a decade’s experience in the industry. His own celebrated brand of music is a variant of tech-house, progressive and techno with influences found in the rhythmic beats of soul, funk, disco and crossover sounds. He has opened and played alongside acts like Tiesto, Dave Seaman, Stephan K, Graham Gold, Dale Anderson, Jerome Isma-ae, Freaky Disco, Jody Wisternoff (WAY OUT WEST), Infected Mushroom and Djuma Sound system to name a few and is also founder/partner of Frequency, a growing underground dance movement born in Hyderabad.

End the year with Psuche Delose – the Music, Yoga & Art festival of Rishikesh!

Thermal and A Quarter makes a movie!