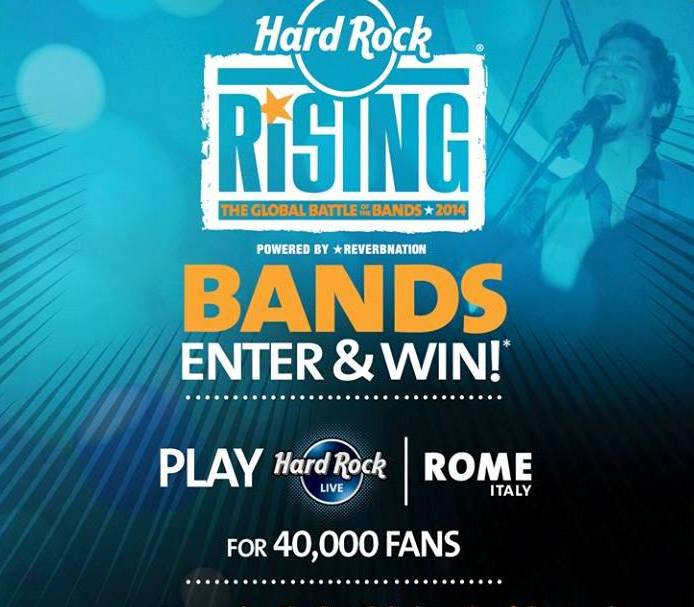 Hard Rock is on the search for rising rock stars to take the stage in the heart of the Roman Empire! Hard Rock Rising will give one local band the chance of a lifetime  an all-expenses paid trip to Rome, Italy to perform at the first Hard Rock Live Rome music festival this summer! The selected runner-up bands will each receive new music equipment and gear valued at $10,000.

Hard Rock, in partnership with the online musician community ReverbNation, will host open registration for bands wishing to participate in the global battle starting on Monday, January 6, 2014, through Friday, January 27, 2014. The combination of Hard Rocks iconic brand and ReverbNations extensive network of more than 3.3 million artists in 250 countries worldwide will provide undiscovered bands with an international stage to jumpstart their careers.

Hard Rock is committed to discovering new musical talent and supporting the emerging artists of tomorrow through the Hard Rock Rising program, said John Galloway, Vice President and Chief Marketing Officer for Hard Rock International. Over the past two years, more than 24,000 artists entered to compete in Hard Rock Rising where more than one million songs from these up and coming artists were downloaded by fans  were honored to welcome these artists to Hard Rocks global stage and look forward to discovering more talent in 2014.

Like Hard Rock, we believe that great music should be heard, said Mike Doernberg, CEO and Co-founder of ReverbNation. In everything we do, we work to expose our community of undiscovered and largely independent musicians to opportunities to get heard, get discovered, and find new fans. The Hard Rock Rising program continues to be the perfect execution of our mission.

To register, hopeful bands can visit one of 81 participating Hard Rock Cafe Facebook pages. Following open registration, fans decide who moves on to the live performance phase of the program by voting on the Hard Rock city-specific Facebook page and downloading free tracks from bands of their choice. Bands that are not within a 100 mile radius of a Hard Rock Cafe can enter into a virtual battle online where a panel of judges will review the bands social content to determine the top five bands that will compete against the winning bands from participating cafes. After voting online, fans are encouraged to visit a participating cafe where they can triple their vote by using a custom barcode at the cafes host stand.  Upon check-in at the cafe, guests who are 21 and older are automatically entered into a sweepstakes to win a trip for two to the all-inclusive Hard Rock Hotel in Cancun, Mexico. For full rules and a list of participating locations, visit www.hardrock.com.

After fan favorites are chosen, participating Hard Rock Cafe locations around the world will host a series of live competitions featuring the local bands. One winner will be selected from each location by a panel of local industry judges. Selected local winners will be narrowed down to the top twenty-five bands worldwide following a second round of fan voting on participating Hard Rock Facebook pages.

Committed to supporting music and emerging artists around the globe, Hard Rock International continues its dedication to support of up-and-coming artists in with the Hard Rock Rising Battle of the Bands, providing a forum for todays hottest new talent.