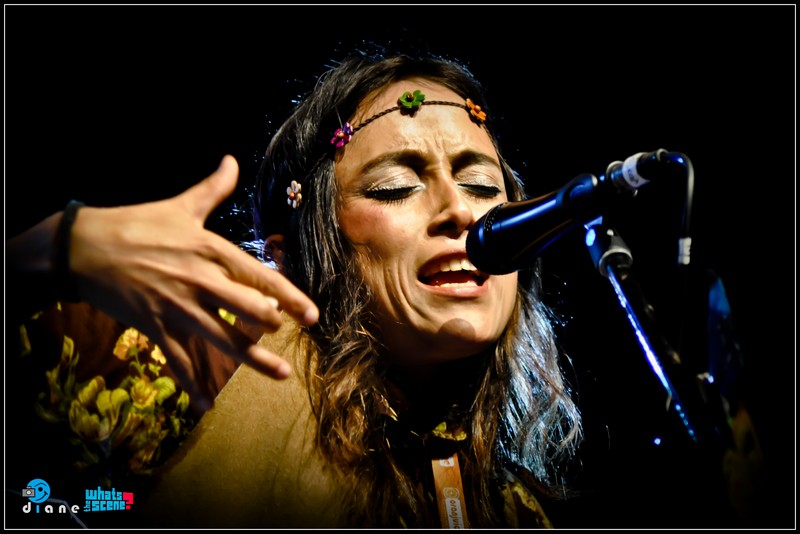 If Day 1 was anything to go by, the acts on Day 2 had their work cut out. However, Soulmate, Lil Ed and The Blues Imperials and multiple Grammy-award winning blues legend Jimmie Vaughan have been silencing doubters for a living and were well equipped to make sure that the festival ended on a really high note.

On day 2, even before the first act, music was already in the air as faculty from the True School of Music, Mumbai performed some pleasant acoustic jazz on an outdoor stage set up at the venue. Near the performance was where Soulmates third album Ten Stories Up was to go on sale for the first time (read an exclusive interview with Rudy and Tips here) along with the rest of the merchandise on display. 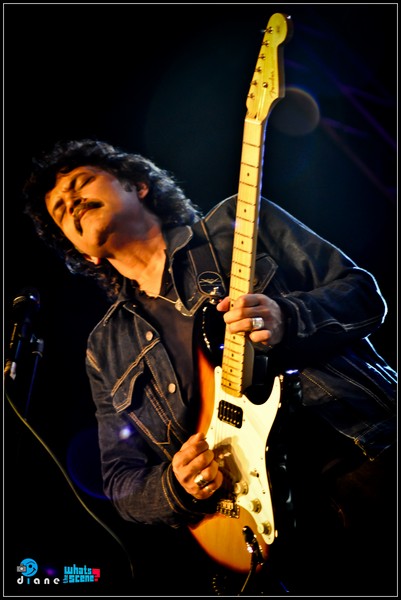 Soulmate, the only band with the distinction of having played in every edition of the Mahindra Blues Festival so far, took the stage armed with an all-Khasi folk ensemble. A pipe folk intro set to a tribal beat on the ksing provided the backdrop for versatile vocalist Tips melodic chanting complemented well by a stylish slide guitar riff by Rudy Wallang. Tips high notes in her powerful tenor voice set a meditative mood as Rudy expertly filled in the pockets with some slick interludes. For their next piece, the band completely reinvented Set Me Free, one of their most cherished tracks from their second album Moving On; the revised arrangement featuring the duitara and folksy flute bridges and still losing none of its raw Blues energy. It was refreshing to see a folk ensemble taking to the Blues like a duck to water. 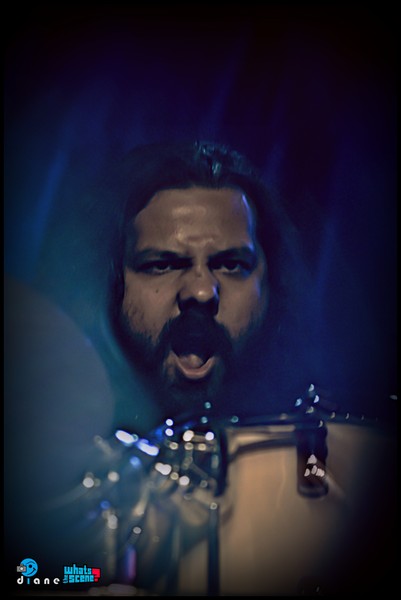 The set got a lot fuller as drummer extraordinaire Gino Banks, precocious bassist Leon Wallang and keyboard prodigy Karan Joseph joined the artistes on stage for another jumpy folk number before a powerful blues-rock piece where Ginos groovy drumming and Leons bass work were a joy to behold. Rudy took over vocal duties, added a solo and then followed it up with a neat bridge to move to a brief instrumental contemplative Blues piece in a straight 4-4 rock beat. Other hits like the jazzy Tell Me and the uptempo Ill be Around followed wherein the signature soulful playing of Rudy and Tips wild-and-whacky vocals got a thunderous approval from the audience. 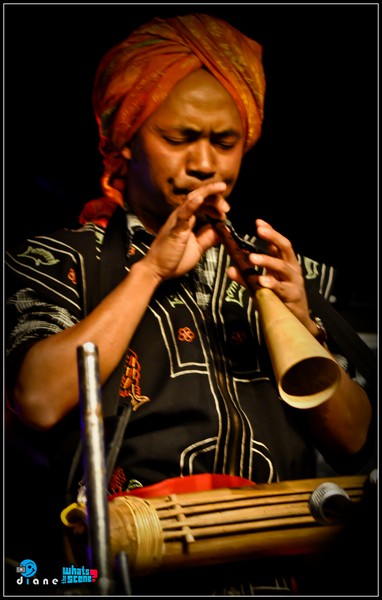 To put it simply, if the point wasnt already made, Soulmates musicianship live was a spectacle to behold. Gino Banks drumming although different from what the audience were familiar with, was tailored to spotlight tenfold what the band played. Rudys immersive guitar playing, hardly the same in any two gigs, stood out not just because of the choice of notes but also because it breathed in all the right places. Tips was an expert improviser too, and as a front-woman, she was a perfect yet humble channel to voice the bands music through to the audience. The band, in all, played with the true blues feeling of the music itself being their reward. 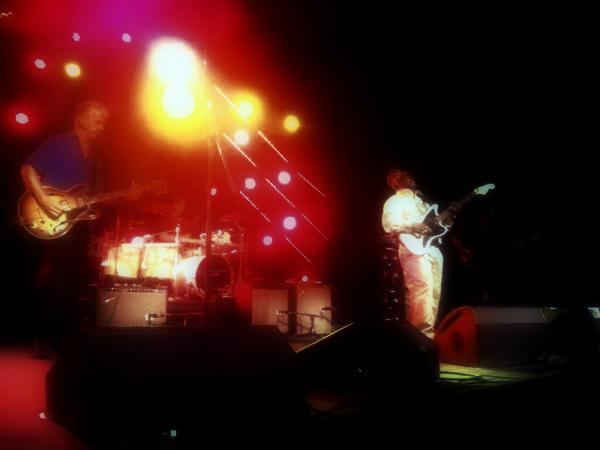 Lil Ed Williams, supported by his band The Blues Imperials stepped onto the stage facing an already aroused crowd from the Soulmate set and he chose to win them over in his own way. The ever-smiling Chicago Blues slide guitarist-cum-vocalist chose to begin with a minor Blues piece in 6-8 supported by a fluttering rhythmic backdrop by guitarist Mike Garrett. The flow of energy from the stage was completely at the mercy of the diminutive frontman and his expressions both on his guitar and his face were a treat.

There were plenty of theatrics to go along with the performance  Lil Ed chugging a bottle of beer, kneeling and playing on stage and even running backstage and into the crowd in the middle of a powerful slide solo without losing any of his accuracy  but there was never a doubt in that the band were truly having a good time. High octane renditions of Jump Right In and Mess Around were some of the standout pieces of their set.

Despite Lil Ed And The Blues Imperials not hitting the ground running, it was well worth the wait. Lil Eds style was old-school blues yet rare and lovable, akin to sitting with a fun friend over a drink while he tells you stories from his past, some filled with emotional highs and lows and some rather quirky and embarrassing. And he was an impressive story-teller at that; his delivery was artful as he shifted his body language from contemplative to groovy, making his words dance and most importantly, letting his music breathe between the words. By the end of the set, he certainly had made a lot of friends. He exited the stage, leaving the last few minutes for The Blues Imperials to engage in an epic marathon jam, a tidy bass solo being the hallmark of it. 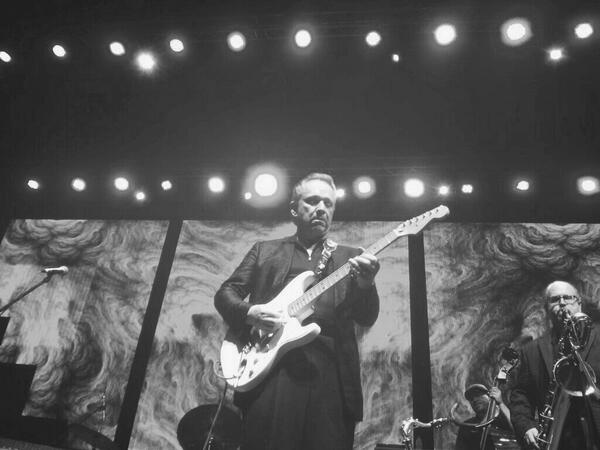 Being thoroughly sated till the penultimate performance, the crowd could be forgiven for being in a very relaxed mood for the last but certainly not the least act  multiple Grammy award-winning blues icon Jimmie Vaughan. A clear masterstroke from the organizers as this was a certain way of making sure the festival ended on a high and had everyone roused enough to sing with the master.

Armed with the Tilt-a-Whirl Band  a well-orchestrated 2-piece horn section, a double bass and a rhythm guitarist – Jimmie Vaughan began with an instrumental piece based on an uptempo Blues riff, very characteristic of some of the early 60s Texas Blues. Jimmie then went on to render a 12-bar standard Blues, Without You with the groove coming from the horn section which was a nice touch throughout the set. Jimmies playing was minimal and selfless but whenever he took over a solo, he poured all of heart and soul over it.

The first mammoth track of the set came with a Rosco Gordon cover Just a Little Bit set to a neat latin R&B beat. Jimmies silky solo was followed by up-beat trombone and baritone sax solos, then Jimmie orchestrated it back to the groovy head of the song. The middle of the set saw the cameo appearance of singer Lou Ann Barton, who walked on to the stage with a swagger, blowing smoke through her nostrils. The Austin-based singer who turned 60 on the day, impressed the crowd with her robust and husky voice which blended well with Jimmies guitar tone on the piece Im in the Mood for You. After the contemplative blues number Just Leave it to Me, Jimmie picked up a harmonica, a first by any artiste at this edition despite its strong association with the blues, for the song Come Love and then did a handful of both duet and solo numbers like Scratch my Back, Wheel of Fortune and the quirky and Texan-accent-heavy I Miss You So. Jimmie then saved the best for his most famous number Boom Bapa Boom where he swung the guitar over to the back of his head and continued playing his solo. Jaws dropped everywhere, but not Jimmies precision.

When it appeared like the set and the night ended, the crowd were stunned by the presence of six renowned blues artistes on stage  Jimmie, Lil Ed, Derek Trucks, Susan Tedeschi, Doyle Bramhall II and Zac Harmon  for the festivals traditional all-star jam, although there were murmurs of discontent at not seeing Tips, Rudy and Warren Mendonsa join them. The all-star jam featured classics like Let the Good Times Roll, Baby what you want me to do and The Sky is Crying and had all the artistes bring their unique origins, influences and styles to the table, soloing in turn. Susan Tedeschi and Lil Ed were once again impressive on the vocal duty.

The takeaways from the festival were plenty. The choice of artistes, each a different kind of blues artiste  Chicago, Mississippi Delta, Jacksonville Florida, Texas, Mumbai and Shillong – was a masterstroke by the organisers. It was no surprise that the festivals Facebook page announced the milestone of 100,000 likes after the show. The festival organizers can take great encouragement from the fact that people were already discussing potential candidates for next years edition. But most importantly the quality of the music that filled the venue over the weekend, certainly gave the crowd plenty of memories to retain for years to come surely.

Witnessing the Splendor of Masters