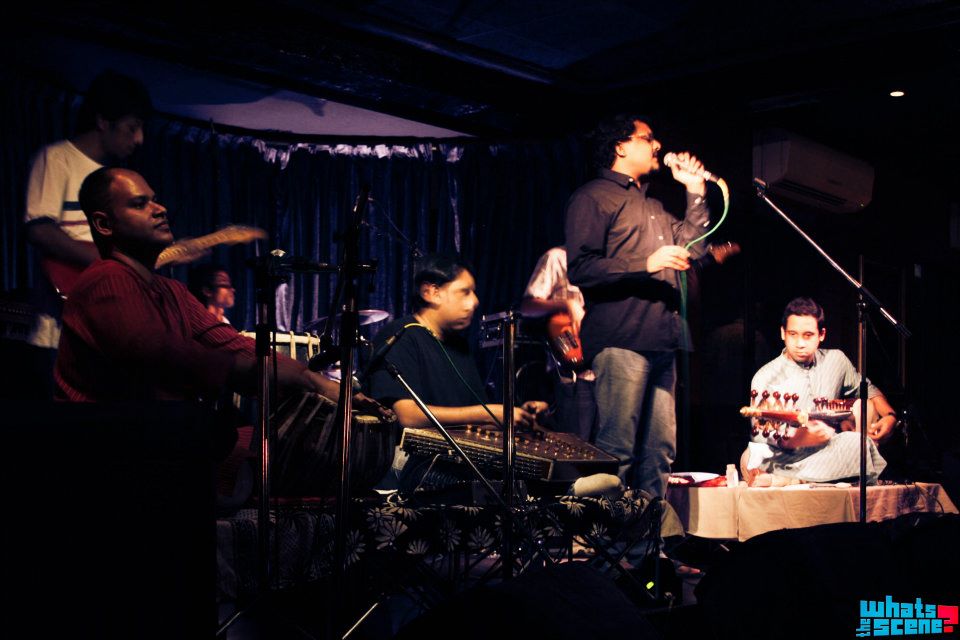 An auspicious month like this calls for some extraordinary classical music festivals and performances all over India. For us Bangaloreans, we had the city of joy brought down to us with the guys from Indian Blue. Theyve been touring Bangalore for the festive season and were playing their last show before heading back home.

Led by Shiraz Ali Khan, grandson of the late Ustad Ali Akbar Khan on Sarod, their music is a continuum of rich classical Indian melody crossing over with some groovy funk-blues for some contemporary sounding world fusion. The lineup included Dishari Chakraborty on Persian Santoor; Arindam Bhattacharya on Vocals; Ranjan De on Bangla Dhol, Tabla; Shovon Mukherjee on Bass guitar; Santonu Borah on Electric guitar and Avijit Sarkar on Drums.

The show kicked off with an impromptu drum+bass jam on John Coltranes Mr. PC, this is where Avijit and Shovon set the precedent for the rest of the show outlining the mastery that each of the instrumentalists commands.

Journey was the first track, a nice happy instrumental track lead in the motif by the Sarod. I noticed some crisp hi-hat work and some outstanding bass runs  a feature I will emphasize for the remainder of the review. Anticipation followed on with the same energy. Some tight little synchronized sections  gave me a nice taste of things to come.  Arindam joined the band on stage to sing the next song, what I recognised as Kesariya Baalam a Rajasthani folk song thats been covered by scores of legends over the years.Measurably slower to suit some delicate harkats, Raag Mand is but one flavor to the Rajasthani Folk sound. Toned bass fills and tabla flourishes filled up the ether along with some delectable bass harmonics. The next track maintained the same mellow feel. Since the levels were a bit lower the tabla was noticeably loud and sharp. This was the time when conversations resumed on tables and people were murmuring amongst themselves and I got the feeling that the audience was slowly slipping away, but then, one transition and drumroll changed everything. The music peaked and crescendo-ed, the energy rose breaking into a crunchy guitar solo. Dishari showed us what a Santoor was capable of with a small interlude, playing down the energy to finish in style.

The next song was interesting; a funky guitar riff set the motif in meter with a time signature in 14/8. It took me quite a few cycles to figure that one out. Launch guitar solo, and resolve to the motif while Avijit Sarkar soloed inside and outside the time boundary with some smooth syncopation. Everyone dropped out for Ranjans Bangla Dhol solo, very Phish-like in giving space to cut loose for a solo spot, while the drum and bass hold on tight to that meter for a groove right in the pocket.

Next up was a dissonant sounding vocal track, Arindam sounded melancholic and yet contemptful with some ornate alaaps, imitated, teased and replied to on the tabla. And when the warm feeling was full of itself, the mood transitioned, heavier and louder with a rock style driving the song into a finality for the set.

Whilst the band took a break, Ranjan entertained the audience with an innovative comical score interpreting a conversation between a husband and wife as performed by Taufiq Qureshi. The band got back on stage to resume regular programming after Ranjans mouth percussion act and a durga puja-esque dhol solo.

There was a request for a Bengali song and Indian Blue obliged. Simply in melody, light sugam vocals made for a nostalgic Bengali song.  Sidenote  It is worth a mention that the best original music modern for its times in the 70s was always from Calcutta. My recommendation to non-Bengalis would be to listen to the forerunner of the movement – Mohiner Ghoraguli.

The highlight of the evening would have to be their rendition of the classic Beatles track While My Guitar Gently Weeps with a light bossa nova beat, those humble chords, the Santoor and Sarod flavoring the melody with a teaspoon of Hindustani classicism. The song simply flowed out from an alternate universe where peace and love unites all humanity. I loved how they presented this song.

They ended the show with an original track dedicated to the gods of the monsoon, a Saawan Barse track that had a tremendous build up with some guitar-delay effects and Ranjan on the mike, creating a sinister vocal texture, brooding like an imminent thundercloud, covering the dry earth with rain as Arindam sang with the joy that abounds in the hearts of people in relief from the sun and in gratitude to the heavens – a powerful way to end a fantastic show and leave a very happy crowd shouting for more.

My key takeaways from this gig were Avijits drumming style – crisp, neat and really attentive to dynamics in levels. Shovon is currently in my Top 3 bass guitarists list. Indian Blue has a sound distinct in this upcoming niche of fusion bands and with some impressive lineage on their side, coupled with their sheer talent- Indian Blue has a long way to go, please await the release of their new album in the coming months.