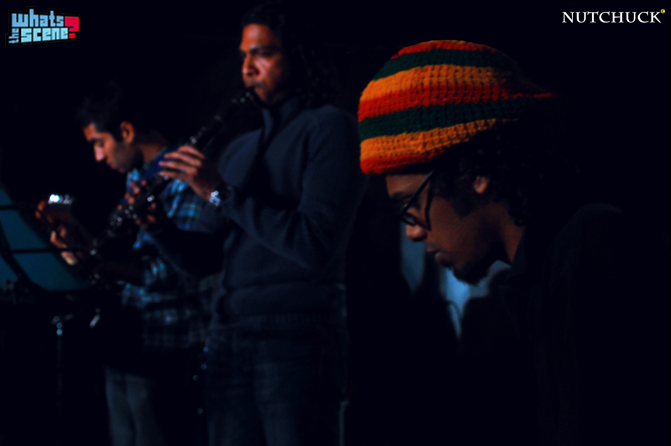 I think I should have more faith in the jazz scene in Bangalore, because every time I go to a jazz gig feeling skeptical, I end up having my mind blown away. Relativity maybe, is the culprit. If you have low expectations from a gig and it turns out to be twice as amazing, your mind can’t help but be blown away. Nation Station is about three months old (maybe the primary reason for my skepticism) and was “born out of a need to reinterpret and reinvent the sound of jazz in the country today”, as their Facebook page reads.

I would have been less skeptical had I known the band members before the gig, because their line-up has some of the best musicians in Bangalore. On lead guitars was Ramanan Chandramouli, guitar instructor at TAAQademy. Wilbur Colaco was on clarinet and saxophone, who along with Ramanan shared the role of Miles Davis in this tribute gig. Wilson Kenneth was on bass guitar, who we know from Caesar’s Palace, MoonArra, Slow Down Clown and more. Bharath Kumar, also keyboardist of the Rex Rozario Quintet, played keyboards/piano. Deepak Raghu from Bevar Sea took on drum duties. Altogether, one power packed band, an evening full of time to chill (on the 5th floor of a five star hotel), and a bunch of hopeful ears. 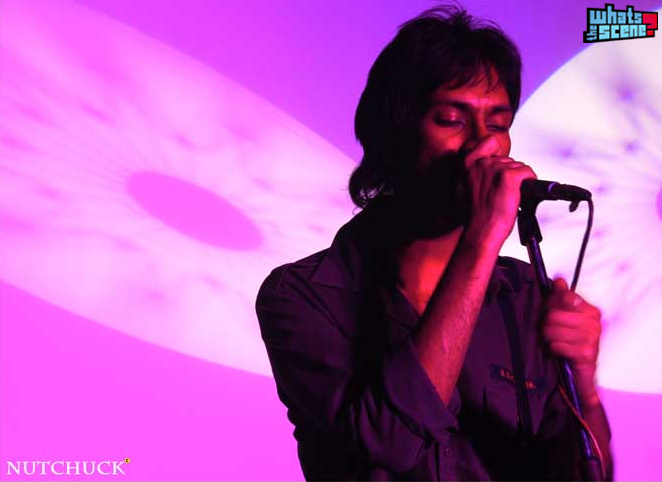 The gig started with the opening band Lateralus. They played a small set consisting of few originals and a cover of Creed’s ‘My Own Prison’. They sounded very post-grunge and Creed/Alter Bridge-like. The vocalist had a powerful voice but could have done with more emotion and variation. The band’s music was a mix of some cool grungy attitude, very easily improvable vocals, some clichéd and confused choruses and good tones. And now, we come back to relativity. The band may have made Nation Station’s first song seem out of the world. But, for a band that was playing their very first gig that night, with a couple of their members playing their first or second gig ever, I’d say with some more practice they could probably pull off something great.

Nation Station then took to the stage. They had a tough job on their hands, attempting to fill the gigantic shoes of Miles Davis. The fact that they were attempting a Miles Davis tribute gig itself gave them a bonus gold star in my book. I have to admit, all the sheet music on stands on the stage made them look like a pro jazz band even before they started playing. And I’m talking about sheet music not only on papers but also on iPads! Technology, I tell you. 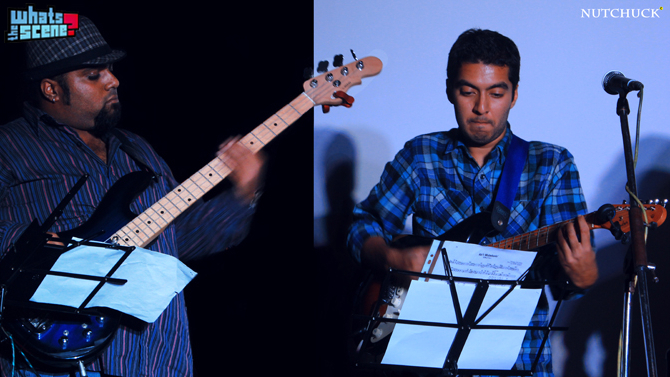 The first song ‘All Blues’, a Miles standard, slapped everyone out of their chill-zone and seemed to say, “Bow down to us, little people!” Ramanan started out with a brilliant note to note solo that moved into his own improvisation over the piece. WIlbur played the clarinet for the song and the first half of the gig, but his volume was too low to hear his notes clearly. Unfortunately, he sounded like “that fast jazz stuff” for most of the gig because of the levels. Ramanan’s guitar playing did stand out throughout the performance, but that first solo especially was what made me throw my guitar out the window later that night.

Next up was quite a slowed down version of ‘Tutu’, followed by a slow and haunting ‘Flamenco Sketches’ that had some soft and really beautiful piano parts. After the three Miles Davis covers, the band slipped into Herbie Hancock’s ‘Chameleon’. Their rendition had much of the original groove and zing. This was another song where we knew there was a great clarinet going on but it couldn’t be heard too well because of the levels and the tone. Bharath played a very Hancock inspired (what I like to call) “space-jazz” solo followed by a very intense and impressive drum solo from Deepak that, I’m positive, spoke words and sang to us. 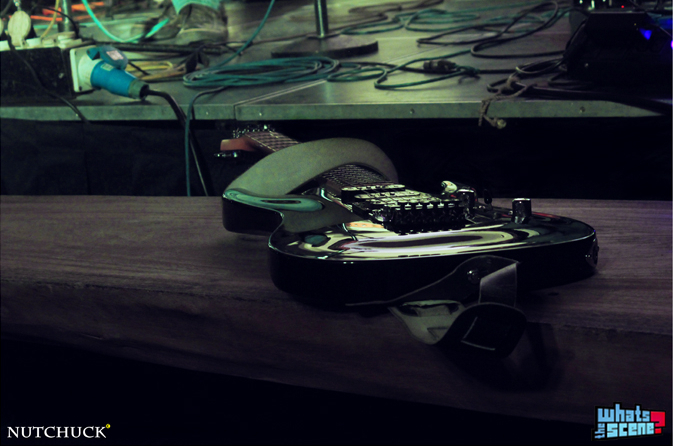 The band returned to Miles Davis with ‘Footprints’ that saw the clarinet leading for the first half, until Kenneth shocked everyone with a bass solo that had every cell in his body oozing out emotion, and a tone that did very well to convey those emotions to the audience. Wilbur took a break for the next song, a Robben Ford-style blues jam. The drumming in this one was interesting especially with the use of polyrhythms. And another astonishing thing in this song was that they did a live fade out, perfectly!

The band then played Sonny Rollins’ ‘Doxy’, followed by my personal favourite Miles number ‘So What’. It had a slightly different groove than the original, but was relatively flat and colourless by the high standards they had set until then. Billy Cobham’s ‘Red Baron’ saw them back in full power. The groove in this song was particularly interesting with the resolving bars in the theme creating a lot of tension with triplets/dotted notes. The groove was accompanied by a glorious organ solo from Bharath, again touching the realm of space-jazz. 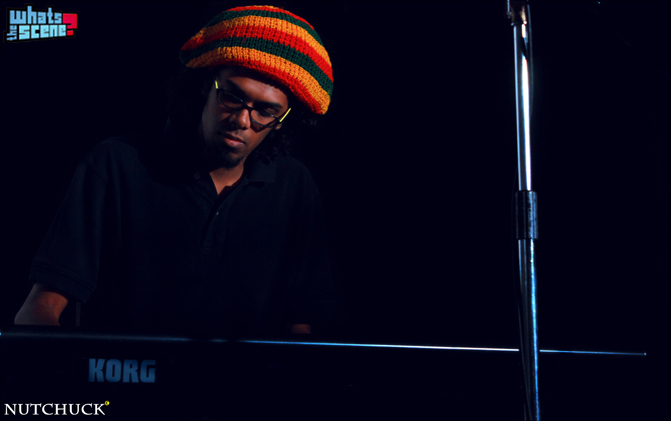 They ended the gig with ‘Freddie Freeloader’, also one of my personal favourites and the third song that night from the legendary Miles Davis album, Kind of Blue. Ramanan and Wilbur (on saxophone now) ended the gig on a high note with a lot of Miles’ flair being present in that last song. The jam on the finale lasted for quite some time, but I didn’t mind as I was absorbing every note to replay in my head on the long ride back home. Miles Davis is one of the greatest jazz musicians that we have ever seen, and to get the audience as satisfied with the tribute to him as we were requires a lot of praise. Needless to say, I absolutely enjoyed the gig, and look forward to more from this supergroup.