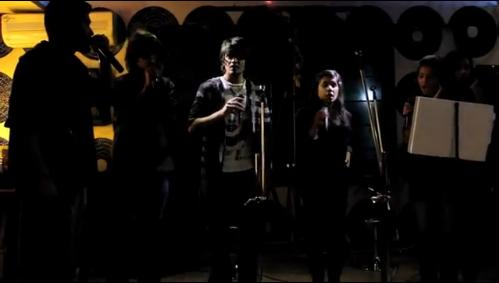 It’s always interesting to watch an a capella group live. Especially one with the kind of credentials Street Cred holds. Most of the members of the group, led by Soumya Jha, are or were part of various college music groups and some were a part of Delhi ensemble Artists Unlimited. I reached the venue just in time to see the in-house band finish up their last two songs (‘Sweet Child of Mine’ going into ‘Won’t Go Home Without You’). Street Cred took their time to come on stage, which, as I later found out, was because they didn’t have enough mikes to work with. On asking around, I got to know that this was due to some miscommunication regarding the band’s tech rider. The sound engineer, though really sloppy behind the console, must be given credit for arranging extra mikes at 8:00 in the evening on a Sunday.

Post a rather long soundcheck, Street Cred was ready to take off. They started their set with a well-structured Michael Jackson medley, which included ‘Man in the Mirror’, ‘Beat It’, ‘Thriller’ and ‘Billie Jean’. After a strong opening, they moved on to the strongest song in the set, a jazz-based song, ‘Walking Down the Street’ by The Real Group. The next song, ‘I’m Yours’ by Jason Mraz, was one song that, according to me, seemed the most out of place in the entire set. However, the group still did a good job on it. They then moved on to another medley – ‘Nothing on you’, ‘My Love’ and ‘Rocketeer‘. While they were well-arranged and well-sung, I felt that they could’ve made it a bit longer, though I must admit it was probably because I was influenced by the complexity and length of the Michael Jackson medley.

The band then sang a cover of ‘Teardop’ by Massive Attack. This would’ve been the strongest song of the set, if only half of the singers hadn’t looked self-conscious while singing it! I guess it was a new addition to the set and not everyone was equally comfortable with it. Yet, it came out almost perfect, minus the sound guy playing havoc with the lead vocalist’s mike levels. From here the group took a two-minute break while the beat boxer kept the crowd entertained with a solo performance. Very easily one of the strongest links in the Street Cred chain, Darwin is an extremely talented beat boxer. Incorporating a host of different drum sounds and grooves, he even added vinyl scratch sounds to his solo performance, enthralling everyone in the crowd.

The group came back with a cover of ‘That Thing’ by Lauren Hill – well sung, but the song itself was overshadowed by Darwin’s solo performance. Their last two songs were the most entertaining of the evening. First was a mash up of ‘What Goes Around’ by Justin Timberlake and a Bollywood number, ‘Tujhe Bhula Diya’. The sound guy again came in the way of a perfect execution by messing up the male lead’s vocal levels. The final song of their set was ‘Memories’ by David Guetta. Intrigued by an a capella group covering an electronic dance number, I paid extra attention to this and wasn’t disappointed. It’s a tricky business, arranging an electronic song to suit a capella, and Street Cred really proved their worth with this one. After their set, the crowd screamed for an encore. After a minute of contemplation and taking the crowd’s opinion, they performed ‘Walking on Sunshine’ again and took a bow afterwards.

The strongest and weakest points of the gig were quite obvious – Street Cred’s strength lies in its sheer talent and knack for excellent arrangement. With a beat boxer (who is also an accomplished singer), the group is rather cohesive with a keen ability in giving the crowd what it wants. The group’s entire performance was marred by sound issues. Mild feedback here and there, mike levels changing mid-song and rechecks being required after every two songs or so tend to kill the buzz that their music creates. However, in this case, these issues are somewhat justified considering the group had to sound check with their audience already present rather than well before the show. All in all, for someone like me who always enjoys a strong melody at a gig, it was a treat to watch Street Cred perform. Hopefully, next time I’ll get to watch them sans technical difficulties.