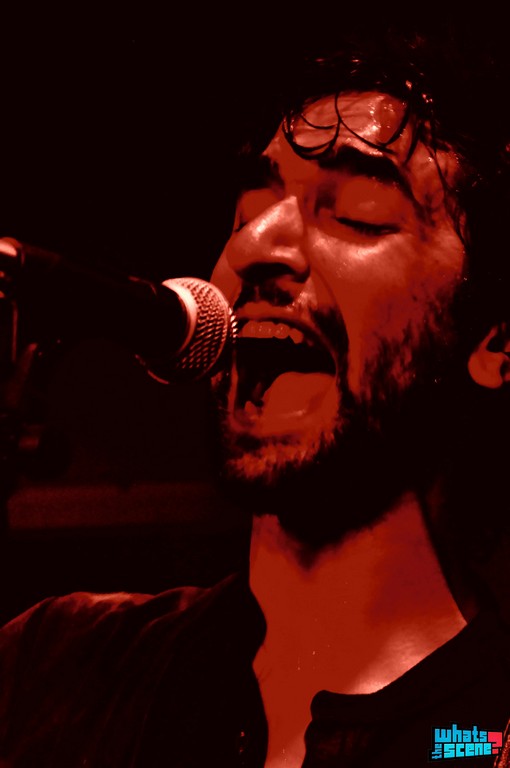 The Hindi-rock genre has been much maligned in the recent past. A large percentage of the output that’s clubbed (sometimes unfairly) under this sub-genre is the MTV-friendly dreck that you hear on your local radio station during peak-hour traffic. Enter Parvaaz – their official bio steers clear of the H-word and classifies them as “blues/psychedelic rock”. One listen to their music and you realize that Parvaaz are indeed a band that are deeply rooted in 70s Brit blues-rock, with the added twist of Hindi/Urdu/Kashmiri lyrics.

The venue – Italia – known more for its vegetarian Italian food (!) than its live music, provided the setting for an intimate, smoke-free gig. Parvaaz, joined by their new bassist Fidel D’Souza, started their set with a swirling, post-rock influenced jam which was the furthest they deviated from their signature blues sound during their set. The band quickly settled into their groove with ‘Itne Arse ke Bad’, a number that managed to sound psychedelic and dirty simultaneously. Set-highlight – Behosh’s riff had all the swagger of Mick Jagger in his pomp and a thumping bassline that was catchier than a rickroll. A feature of Parvaaz’s setlist was their uber-groovy bass lines ably performed by Fidel. Frontman Khalid Ahmed’s quiet demeanour betrayed him at one point when he mentioned that the feedback he often received was that he did not interact with the audience enough whilst on stage. Ironically that proved to be his only substantial interaction with the sparse 40-odd people seated at the venue.

Their set also featured their debut single ‘Dil Kush’ which starts off like all good debut songs should but then had the audacity to have an indulgent and out-of-place 3 minute drum-solo section in it. ‘Marika’ was another song featured that began with promise but then petered out and ran out of useful ideas before it reached its conclusion. The catchy ‘Azaadi’, about freedom and the lack of it in India, was the penultimate song of the gig and it finally got some heads-a-bobbing and lips-a-moving in the crowd. The wonderfully written ‘Ziyankaar Pt I’ was the fitting finale to this short concert. The song used a repetitive two-note bass line in the verse and some arpeggiated chords over it to build an eerie sense of guilt which perfectly complimented Khalid’s vocals on this track. Guitarist Kashif Iqbal was tight without being overly flashy and had a lovely guitar tone although certain chord patterns he used seemed to repeat in a few songs.

This fledgling band seems to have gone through quite a cycle during their short tenure in the music scene. From playing small-time college fests to winning the prestigious B-School of Rock at IIM-B earlier this year, they’ve come a long way. Vocalist Khalid is one of those talents that can effortlessly transition from a passionate Urdu couplet to a high-pitched, primal shriek. (Listen here at the 8.02 mark. yes that’s his voice!) 2012 probably has a lot in store for them. Only word of advice: fewer drum solos please.