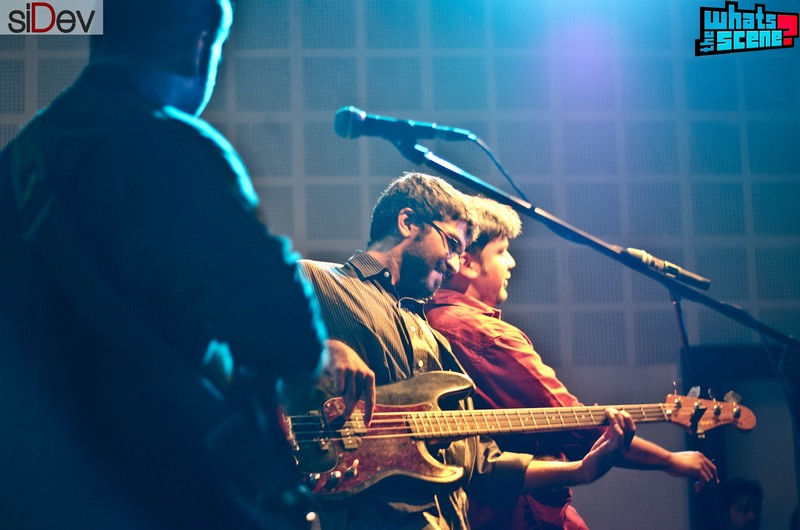 Formed in 2007 in the deep woods of Madras Christian College, Grey Shack has had an erratic existence until they made an appearance back on the live circuit last year. Featuring Rohan Sen on vocals, Vikram Vivekanand on guitars, Vinay Ramakrishnan on drums and Madhav Ravindranath on bass, this rock n roll outfit finally released their debut album Step Outside at Star Rock (Chennai) on August 14.

The calm before the storm, you could call it. But while the clock hands were shooting past 8.30 pm on Tuesday night, the members of Grey Shack were calmly walking about the venue as the crowd trickled in and shaking hands while Vikram surveyed the equipment. We finished soundcheck in no time because our equipment wasn’t against us. We did one check and hunnnhhthat sounds good (sic) he looks around, surveying the floor for the boys from Skrat – the opening act for the night, to walk in and get the gig started. And right on cue, they step in, the energy just palpable as they launch into a set from their recently-released  In The Shed  video. Well into the first song, the bass begins to get inaudible, a minor glitch in sound. But by the time they get to Tin Can Man it gets louder and vocalist TT Sriram screams out Grey Shack, Grey Shack, Grey Shack like an emphatic fanboy. But his infectious energy just catches on as they move from the snorts and distortions on Big Bad Bombs into a blend of covers with their own material. I didn’t quite know this at the time, but that would set the standard for the night.

By the time Grey Shack was setting up, the crowd was already charged up, with a major chunk of those present huddled in two corners  one towards the stage and the others all across the bar. After a hurried recheck and reaffirmation of the sound, they wasted no time launching into the first song Beautiful Man,with its signature AC/DC influences and Vinay pounds away with a permanent grin on his face. Though theyve already done it on record, the groovy reggae breakdown halfway through the song drew some surprised hoots. Well-timed, tight and brimming with energy, Grey Shack started well and that was job half done.

This song is about the man who lets me live in his house, declares Rohan before he lets Vikram take over on the grungy opening to Monkey Man, after which follows a quintal of onstage tomfoolery.  Rohans a frontman who has taken the best pages out of every legendary vocalists book when it comes to stage antics  scream, wail, talking to the audience and harnessing that restless energy and as they close the song, he calls out to the ones stuck at the bar, It’s very interesting to watch the people in the back try to have a conversation while we are playing, punctuated by a pseudo-evil laugh. But before the humour settles in, the band mellows down, moving into a very Doors-like narrative. Like Morrison on Ghost Song, Rohan spouts some impromptu poetry about a girl he metbut not long into it you begin to notice the eerie, familiar tone of Rob Ds Clubbed To Death take over. Powerful, entrancing and well-executed, a soulful wail held under the weight of the bass emanates as the song builds to a close, immediately jumping into One Night Stand,which is all classic grunge.

With Siddharth Raghunandan of Totem on an acoustic, the next song, New Day is a song atypically Grey Shack. You definitely need one like this smack in the middle of your set, especially if the audience needs to get that ringing sensation out of its ears. The band look like they need it too because by now, weve got to the point where they play a blend of covers and original material as Id mentioned before. As New Day runs to a close, they launch into a medley, starting with Kashmir (no points for imagining the cheers and the wildly bobbing heads that followed this unmistakably popular riff) to Porcupine Trees Shallow, building itself into some heavy Rage Against The Machine with Killing In The Name Of. And as expected, this trifecta drove the crowd crazy  screaming and headbanging ensued, singing along with the cathartic F**k you, I wont do what you tell me verse as the vocalist egged the crowd on. Nobody expected Kashmir to kick in, Vikram tells me later. We try and give something different every time. And considering we just played two weeks back at Star Rock, we wanted to give something extra

Step Outside was a sudden drop in the rebellious energy, breaking back into Grey Shack territory. Written by founding member and former bassist Tomojit Basu, Step Outside was just Vikram taking his time on the guitars, easing back after their first medley.

The second half, post the break, started off with Awake, one of Grey Shacks oldest songs and one that has undergone the most changes. And for that very reason, this song comes across as a crash course on the evolution of their sound over the years. After Awake sputters to a stop, and while Madhav and Vinay are engaged in a drum and bass exchange, Rohan turns around for a Lizard King impersonation with a swig of his drink, turning around for the next medley  a seamless blend of Fever Dog, Heartbreaker, Back in Black (AC/DC), Tom Sawyer by Rush, and The Whos Baba O Riley, ending with Steppenwolfs Born to be Wild.

Gonzo is yet another track written by Tomojit Basu – takes off straight, brazen and to the point, much like the book which inspired it. Sure enough, like the chorus Too weird to live, too rare to die goes, this song is indeed a tribute to the madness we see in Hunter S Thompsons iconic work Fear and Loathing In Las Vegas  A Savage Journey To The Heart Of The American Dream. While the opening riff takes over, you cant help remember Thompson mumble We were somewhere around Barstow when the drugs began to kick in The song breaks into an interesting funk interlude as Vinay screams dissent and goes off into a Tamil folk groove and an impromptu off-time jam goes on from there  And hes still holding that grin.

Thank you for supporting Grey Shack and thank you for coming tonight, Rohan shouts out to the crowd as they close Gonzo, but from those right in front of the vocalist to the ones who were stuck at the bar all along, everyone kept screaming for an encore, which the band gladly indulged in  launching into their heaviest track Dirty City, a definitive riding song that sounds like something Lemmy and KK Downing had from a secret affair during the attack of the NWOBHM. We hope to sell this to some motorcycle company someday, jokes the vocalist as he launches into the final song for the night.

Album launches in this town are usually haphazard and hastily put-together or on the other hand, nobody bothers to take the effort to have one either.  Now, Grey Shack deserves praise for how they put this one together  well marketed, sincere efforts being taken for the quality of sound and honestly, after youve seen them live, the album can only serve as a souvenir to remind you of how great this bunch was that night.

Heres the link to Grey Shacks FB profile, you can listen to the album here.

Rohit Panikker is a Chennai-based journalist, pop culture junkie and tea addict. In an alternate universe he is Indiana Jones, lives in a human-sized Hobbit hole (yes, a dreamy oxymoron) and writes like Hunter Thompson! Follow Rohit on Twitter @rohitpanikker

Day 1 of The GoMad Festival 2013 at FernHills Palace, Ooty